Boston — An extremely rare signed photograph of Neil Armstrong taking his ‘giant leap for mankind ’ sold for $52,247 according to Boston-based RR Auction.

Fifty years ago, on July 20, 1969, the Apollo 11 Lunar Module 'Eagle' touched down on the surface of the moon.  Astronaut Neil Armstrong descended the spacecraft's ladder and spoke his immortal words: 'That's one small step for a man, one giant leap for mankind.' Buzz Aldrin soon followed behind him, and the two became the first earthly beings to set foot upon another celestial body. 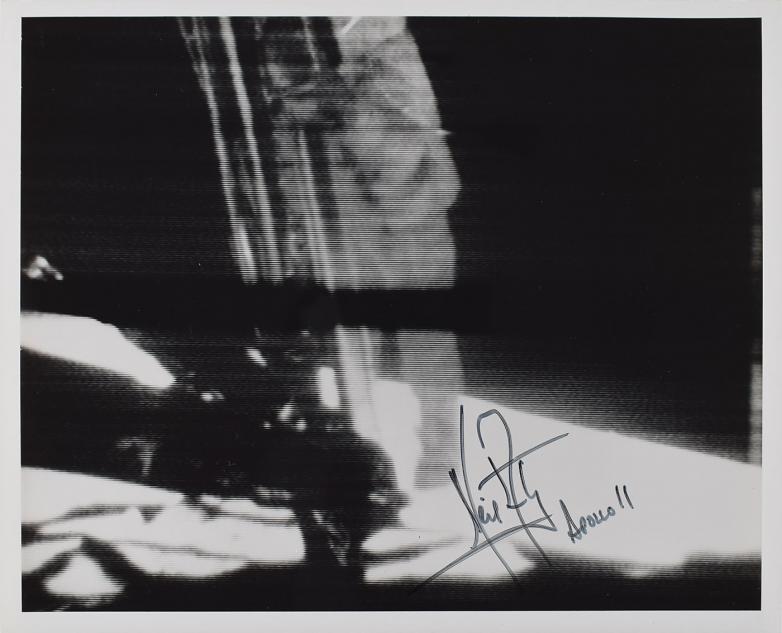 Captured from NASA's original video transmission of the historic event, this is one of the most recognizable images of the lunar landing: Armstrong taking his first step onto the landing pad, seconds before delivering what is arguably the most famous quote of the 20th century.

As the Apollo 11 astronauts touched down on the moon and the first television transmissions made it to earth, NASA's Jet Propulsion Lab in California was called to work. Responsible for altering the images to photo film, the photo development team there was first to see and handle most of the now-famous images.

In appreciation for his hard work, NASA gave the man in charge of the Jet Propulsion Lab this photo, one of very few images of Armstrong on the lunar surface (as the man behind the camera, he is absent from almost all photos from the landing).

As coincidence would have it, the technician's sister lived in the same neighborhood as Neil and Jan Armstrong in Bethesda, Maryland, and on a family visit he was introduced to the astronaut and his wife.

A very gracious Armstrong gladly signed this photo, which has been in the possession of the family of the head of NASA's Photo Department Richard Windmiller, Sr. until now.

“It’s boldly signed by the first man to step foot on the surface of the moon and represents the pinnacle of Armstrong signed photos,”said Bobby Livingston, Executive VP at RR Auction.

Apollo 11 full-length photograph of Buzz Aldrin standing on the moon, signed by all three Apollo 11 astronauts sold for $21,587.