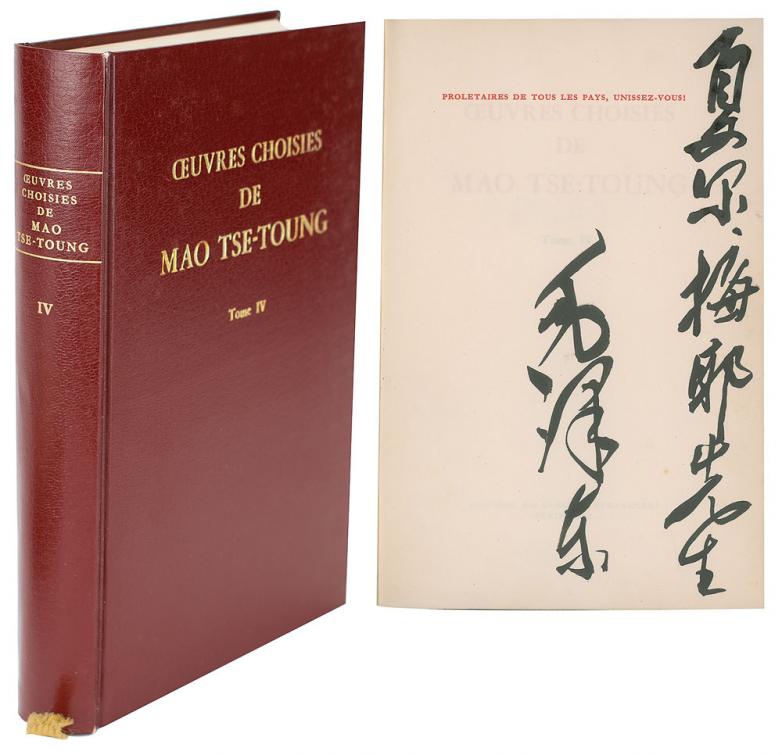 The selected works of Mao Zedong, inscribed to the special counsel of Cambodia's King Sihanouk (Estimate: $300,000+)

Boston — With over 1,000 lots up for bidding, RR Auction's May Fine Autographs and Artifacts sale is the biggest thus far in 2020, with online bidding through May 13.

A rare handwritten letter by Sun Yat-sen, founding father and first president of the Republic of China (1866-1925). The three-page handwritten letter in English, signed "Y-S Sen," The Republic of China, President's Office letterhead, November 29, 1921. Letter to the journalist Mrs. Morton, regarding acts of humanitarian relief, photos of which he has just encountered and is sending her, along with a document explaining his recent failed Northern Expedition. He also discusses their success in raising money for humanitarian aid and for the Kuomintang party by organizing various events, such as theatre performances and a bazaar. He finishes by expressing his regret not being able to meet with her and discuss women's actions in southern China due to his departure two days later. (Estimate: $100,000+)

A letter by Claude Monet about Queen Victoria's state funeral: the eight-page handwritten letter in French is signed "Your old man who loves you, Claude," on Savoy Hotel letterhead, February 2, 1901. The lengthy letter to his wife Alice, commenting on the funeral of Queen Victoria (which he had observed earlier that day), meeting the writer Henry James, and attending a dinner hosted by John Singer Sargent at a house once occupied by James McNeil Whistler. (Estimate: $20,000+)

A battlefield message from the Revolutionary War's 'Swamp Fox,' Francis Marion. Due to his irregular methods, he is considered one of the fathers of modern guerrilla warfare. The Revolutionary War-dated handwritten one-page letter signed "Fran. Marion," dated February 26, 1781. Letter to Brig. Gen. Thomas Sumter, written between the battles of Cowpens and Guilford Court House. (Estimate: $20,000+)

The Fine Autographs and Artifacts Featuring Civil War from RR Auction began on April 17 and will conclude on May 13 at 7:00 PM ET. For more information, go to www.rrauction.com.