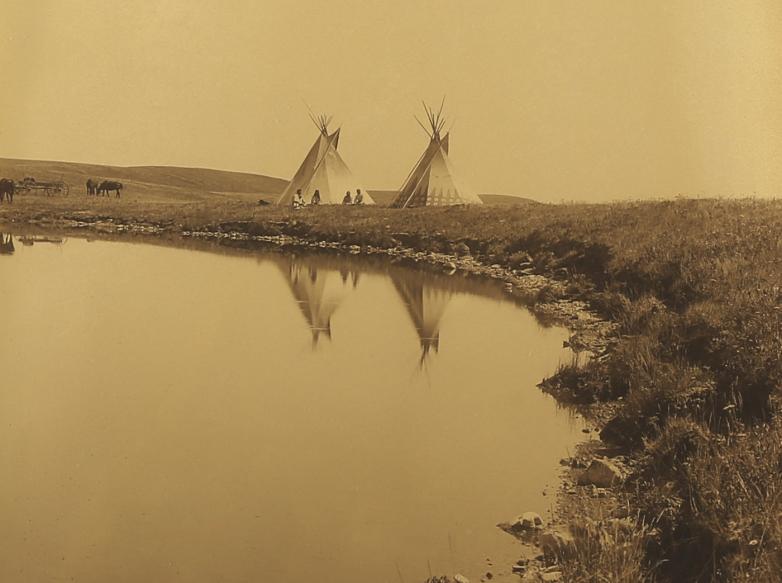 Los Angeles – On June 30, Bonhams will sell what is believed to be the largest single-owner collection of photography from premier American photographer Edward S. Curtis (1869-1952). Curtis was a skilled photographer and documentarian of the American West and at the height of his career a nationally celebrated figure, counting President Theodore Roosevelt among his admirers. This never-before-seen collection coming to Bonhams Los Angeles on June 30 from Dr. Billy Utley, distinguished Southern California collector, and Curtis family friend. All lots on offer are fresh to market, acquired by Utley in large part directly via Curtis’s daughter Elizabeth “Beth” Curtis and her husband, Manford “Mag” Magnuson.

Among the many sale highlights is the largest known orotone print of Canon de Chelley. This photograph, considered to be a seminal work in Curtis’s oeuvre, is notably the work that hung above the fireplace in the photographer’s home in Santa Fe Springs, California. The work is estimated to fetch $30,000-50,000.

Bonhams New York Head of Photographs Laura Paterson commented: “Best known for his iconic portraiture of Western Native American tribes, Edward Curtis has a fantastic oeuvre of impactful and richly historical work. Dr. Utley, ardent supporter of Edward Curtis and friend of the family, has spent decades collecting wonderful examples of everything that the legendary American photographer produced. From oversized orotone prints in custom-made Curtis Studio frames to one-of-a-kind movie posters, this remarkable collection of photography and ephemera from The Curtis Studio is an absolute trove. It is exceedingly rare and simply magnificent to have the opportunity to work with such a well-preserved and comprehensive set of important photographs with such fantastic provenance.”

Edward Curtis grew up on the frontier of the American Midwest, raised in Wisconsin and Minnesota. His lifelong photographic investigation began once his family relocated to the Pacific Northwest; beginning in the 1890s in Washington state, Curtis made a name for himself, locally at first, for his dignified portraiture. Eventually, he garnered nationwide attention and admiration. After being appointed official photographer on the Harriman Alaskan expedition of 1899, he became known for his thoughtful imagery of Native American tribes, a community that he was fascinated by and a subject to which he would dedicate his life. Curtis felt he could see a sociocultural “vanishing” of the indigenous people and their traditional ways of life, and it was his duty to capture that which still remained.

In 1907, through Theodore Roosevelt, Curtis met John Pierpont Morgan, who provided him with the monetary funds to embark on the production of The North American Indian, which became his life’s work. The North American Indian, a 20-volume series of 2,200 photogravure images of tribes west of the Mississippi, began as a passion project, yet in its completion would lead Curtis to endure nearly 30 years of all-consuming work. He would regularly work 16 hours a day, seven days a week. In total, he took more than 40,000 photographs. Through the project, he set out to accurately capture Native American life and culture before the complete erasure of their traditions by federal government regulations.

The sale is highlighted by a number of photographs Curtis took for The North American Indian, among them a grouping of 23 cyanotypes from Volume IX, c. 1912. These cyanotypes feature images of Quinault and Tahola tribe members, including portraits, still lifes, and photographs of figures fishing and boating en plein air. In the introduction to this volume, Curtis remarks on the Pacific Northwest tribes’ reliance on the sea and the skills they developed in building and handling watercrafts; these 23 cyanotypes depict that expertise. The lot is estimated to realize $30,000-50,000.

Another auction highlight is an oversized orotone print of The Vanishing Race, considered to be Curtis’s signature image. Standing as the largest orotone ever produced of this photograph, it displays key themes of Curtis’s work, with the Native America figures pictured shorn of their traditional dress, riding into a future unknown. The lot is estimated to fetch $20,000-30,000.

The sale has wonderful examples of Curtis’s portraiture, including an arresting portrait of Geronimo at age 76 taken the day prior to President Roosevelt's 1905 inauguration, to which the venerable Apache leader had been invited. This photograph is featured in 1997 Taschen book The North American Indian, the Complete Portfolios, Vol. I. It is expected to achieve $10,000-15,000.