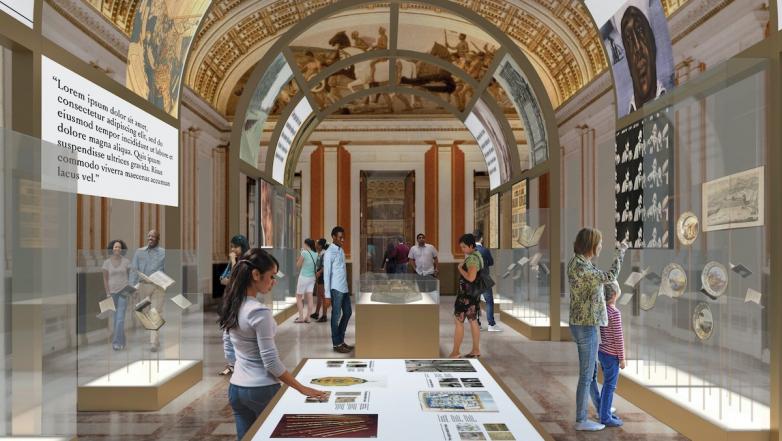 Washington, D.C. — The Dwight D. Opperman Foundation is donating $1 million to reimagine and enhance the visitor experience at the Library of Congress with a new orientation gallery, exhibitions and learning lab, the Library announced today.

The Phoenix-based foundation’s donation to support design and construction of the Library’s visitor experience is one of several major gifts to the project in 2020 and was announced just after Giving Tuesday.

The Library is pursuing a multi-year plan to transform the experience of its nearly 2 million annual visitors, share more of its national treasures with the public and show how Library collections connect with visitors’ own creativity and research.

"The Library of Congress is, in my opinion, the nation's greatest cultural institution," said Julie Opperman, chairman of the Dwight D. Opperman Foundation. "I am pleased to help support this great initiative for people the world over to discover more of its unique and vast treasures."

The Dwight D. Opperman Foundation was established by Dwight D. Opperman upon his sale of West Publishing Company where he was chairman and creator of WestLaw, the iconic legal information provider. Opperman, the most noted philanthropist of his day in the legal/judicial community, wished to continue his efforts in a private capacity. Prior to his passing in 2013, he appointed Julie Opperman as the sole controller of his self-funded charitable foundation.

“The Opperman Foundation’s support will help transform the way visitors experience our national library, and we are grateful,” said Librarian of Congress Carla Hayden. “Future visitors to the Library of Congress will discover the many treasures held here to document our nation’s history and creativity.”

After half a century of supporting legal education, institutions and the American judiciary, as well as establishing the Devitt Award 38 year ago – the nation's highest honor that is bestowed upon an Article III federal judge – Julie Opperman has extended that mission to the creation of the Justice Ruth Bader Ginsburg Woman of Leadership Award in early 2020. A decades-long friend of Dwight Opperman, Ginsburg had personally asked Julie to establish and carry out her sole legacy award. Honored to fulfill the request, she has selected the Library of Congress as the permanent home of the annual ceremony and gala. Dwight and Julie Opperman had been long-term donors of the Library and are delighted that this latest donation will further help the Library to be far more reaching and responsive to the public.

Celebrating its 220th year as a center of knowledge and preservation of the nation’s cultural heritage, the Library aims to bring more of its collections out of the vaults and into public spaces and online presentations.

Three core components are central to the visitor experience plan. These include a new ground-level orientation gallery in the Thomas Jefferson Building to help visitors navigate the Library and understand its history, a new learning lab to engage and inspire visitors and new exhibitions to feature the Library’s treasures.

The Opperman gift will build on the significant investments of Congress and private philanthropy in the Library’s infrastructure. Earlier in 2020, philanthropist David Rubenstein announced a lead gift of $10 million to support the visitor experience plan, and the Annenberg Foundation donated $1 million, as well as a collection of photographic prints. Design work is now underway for the project.

The visitor experience project has continued to receive support from Congress, with $20 million appropriated so far as part of this public-private partnership.

While Congress has invested generously in the Library over its history since 1800, private philanthropy also has played an important role in the development of the Library and other cultural institutions. Private sector donors have funded exhibitions and programs, including the creation of the Library’s John W. Kluge Center and Kluge Prize for Achievement in the Study of Humanity, which is currently honoring political theorist Danielle Allen, as well as creation of the Library’s Packard Campus for Audio-Visual Conservation in Culpeper, Virginia.