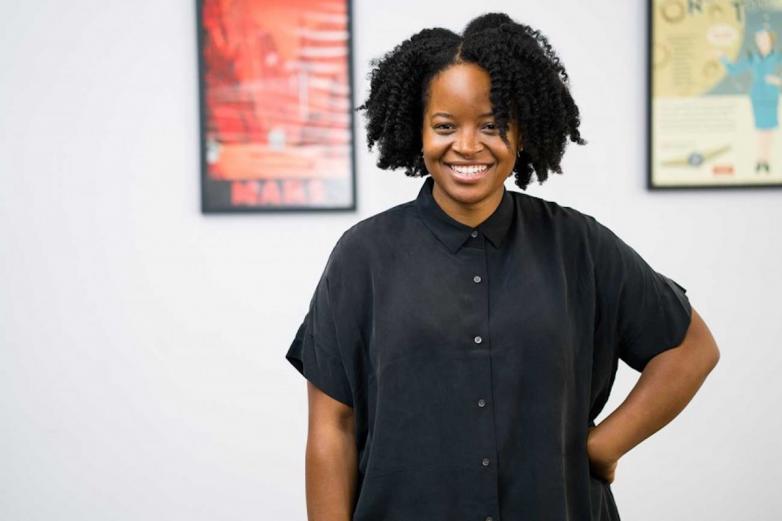 Alyssa Collins, assistant professor of English Language and Literature and African American Studies at the University of South Carolina.

San Marino, CA — The Huntington Library, Art Museum, and Botanical Gardens announced today that it has awarded Alyssa Collins, assistant professor of English Language and Literature and African American Studies at the University of South Carolina, a yearlong Octavia E. Butler Fellowship for the study of the renowned science fiction writer. Butler (1947–2006) was the first science fiction writer to receive a MacArthur “genius” award and the first African American woman to win widespread recognition writing in that genre. The Huntington holds Butler’s archives.

The research grant provides support for a scholar to spend a full academic year working with Butler’s literary archive, which, over the past seven years, has become the most frequently requested collection at The Huntington.

Collins’ project is titled “Cellular Blackness: Octavia E. Butler’s Posthuman Ontologies.” Her project treats Butler’s Xenogenesis trilogy of novels as a central touchstone and explores Butler’s interest in genetics, evolution, and cellularity. Collins uses “cellularity” to refer to Butler’s engagement with the story of Henrietta Lacks, a Black woman whose cancer cells were harvested without consent in 1951 for medical research and became known as the HeLa immortal cell line, and Butler’s representation of cellular replication as a mode of Black feminist survival.

“There are four areas in the Butler archive that are fundamental to my research: subject files and research materials, commonplace notebooks and notecards, drafts, and correspondence,” said Collins. “Each category offers a different, discrete moment of development for Butler’s frameworks on cellularity and evolution. Given the ambivalent presentation and voice of some of Butler’s novels and characters, Butler’s notations—information stowed in newspaper margins, on notecards, and as floating ideas on commonplace notebook pages—offer keys to how we might think about the intersections of her work and that of the scientific discourse of the period in which she wrote.”

Collins will join a cohort of 14 long-term fellows who will be coming into residence at The Huntington for the full 2021–22 academic year. Five of the incoming research fellows are trained in history, another five in literature, two in art history, one in philosophy, and one in Chicano studies. Ten of the fellows are either postdoctoral students or assistant professors; 11 are female; and six are people of color.

“The peer review committees met their obligation to make awards where they would make most difference, recognizing in particular the needs of junior scholars from institutions with heavy teaching loads, of postdoctoral students coming to the end of their fellowships, and to faculty from backgrounds that are historically underrepresented in the academy,” said Steve Hindle, the W.M. Keck Foundation Director of Research at The Huntington. “Inclusive excellence of this kind is critical to the program,” said Hindle.

The fellowship program experienced a steep increase in the number of applications this year, rising by 57 percent from 114 in 2019–20 to 179 in 2020–21. The success rate for applications for long-term fellowships is generally around 10%-11%, but competition was so intense this year that the proportion dropped to less than 8%.

When the 14 scholars come into residence, they will be joining the single largest long-term fellowship cohort in the history of The Huntington’s research program: 29 in all (including six scholars who deferred their awards from last year). Seven of these scholars are Distinguished Fellows by invitation, several are joint appointments in The Huntington’s various programmatic collaborations with Caltech, and three are assistant professors at UCLA, UC Riverside, and UC San Diego appointed through the Early Career Faculty Program for the Advancement of the Humanities, funded by the Fletcher Jones Foundation.

In addition to conducting research in The Huntington’s collections, the cohort will have frequent opportunities to share and discuss their work with each other—one of the key benefits of the residency.

Octavia E. Butler, a Pasadena native, began writing at the age of 10 and turned to science fiction by the time she was 12. She often cited the 1954 movie Devil Girl from Mars as her inspiration: “I thought, I can write a better story than that.” Despite being told repeatedly by family and friends that writing science fiction was not a career for a Black person, Butler pursued creative writing courses at Pasadena City College and there won a student short story writing contest.

In 1969, Butler attended a screenwriting workshop where she caught the attention of Harlan Ellison, a prolific and influential author of speculative fiction. Ellison encouraged Butler to attend the Clarion Science Fiction and Fantasy Writers’ Workshop in Pennsylvania, where she made lifelong connections and sold two stories.

For the next five years, Butler wrote and supported herself with menial jobs but did not sell any of her writing. Finally, in 1976, Doubleday published Butler’s first novel, Patternmaster. Her best-known work, Kindred, appeared in 1979. A standard in many high school and college curricula, the novel follows a Black woman who travels back in time to a plantation in antebellum Maryland to confront her history.

In 1993, Butler published Parable of the Sower, a near-future dystopian novel that continues to resonate with contemporary readers. The sequel, Parable of the Talents, followed in 1998. Butler moved to Washington state in 2000 and died in 2006 after a fall outside her home. She was 58 years old. In all, Butler published 12 novels and one volume of short works, earning two Hugo and two Nebula awards along the way. Her pioneering work explored themes of identity, community, power, climate, sexuality, and class, as well as race.

Butler bequeathed her papers to The Huntington. The collection includes extensive drafts, notes, and research materials for her novels, short stories, and essays, as well as correspondence and ephemera from throughout her life. In all, the rich trove of materials now fills 386 boxes.