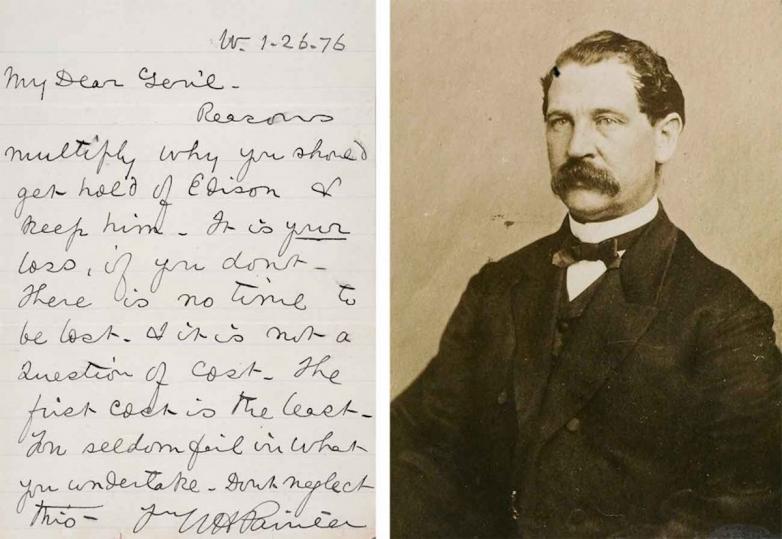 Left: “…get hold of Edison & keep him,” urged a promoter of Thomas Edison’s quadruplex telegraph to Thomas Eckert, president of the Atlantic and Pacific Telegraph Co., in 1876. Thomas T. Eckert Papers. Right: Thomas T. Eckert, circa 1862.

San Marino, California — In a move that deepens its collections in the history of science and technology as well as its American Civil War holdings, The Huntington Library, Art Museum, and Botanical Gardens has acquired the personal papers of Thomas T. Eckert (1825–1910), head of the United States Military Telegraph (USMT) under Pres. Abraham Lincoln and later the president of Western Union. The archive includes materials related to inventor Thomas Edison’s first great electrical invention: the quadruplex telegraph, which allowed users to send four telegraph messages simultaneously. Original documents detail the drama and machinations that unfolded in the early days of telecommunication, when rival railroad barons vied for control of the lucrative telegraph business.

The archive also contains new information that highlights the USMT’s role in the 1862 campaigns of the Civil War, especially those in Virginia and Maryland, including the battle of Antietam.

This is The Huntington’s second acquisition of Eckert’s papers: In 2012, the institution made headlines with its purchase of the official telegraph ledgers of the USMT office in Washington that was headed by Eckert. The ledgers, spanning the years 1862–67, recorded nearly 16,000 Civil War telegrams, including exchanges between Lincoln, members of his cabinet, and officers of the Union Army. Roughly one-third of the messages were written in code. The 2012 acquisition also included the cipher books used for encrypting and decoding telegrams. (A crowdsourcing project was launched in 2016 to transcribe the coded telegrams. The digitized ledgers and accompanying transcripts can be viewed on the Huntington Digital Library. Full decryption of the encoded telegrams is a future project.)

The newly acquired papers comprise Eckert’s own personal files: correspondence from his early Civil War work (Eckert was in charge of all telegraphic communications for Gen. George B. McClellan’s Army of the Potomac from February to September 1862) as well as a previously unknown archive from his post-war career. The collection includes 217 items—letters, telegrams, photographs, receipts, and other materials—that trace the growth, economics, and politics of the U.S. telegraph network as it spread across the nation with the railroads.

A key historical figure in the collection is Union Pacific railroad magnate Jay Gould, who employed Eckert in the 1870s to head his Atlantic and Pacific Telegraph Co. (and who, coincidentally, was a colleague of Collis Huntington, uncle of The Huntington’s founder, Henry Edwards Huntington). Gould’s bitter rival, William Henry Vanderbilt, controlled Western Union, and the archive sheds light on the telegraph wars between the two. Gould ultimately gained a controlling interest in Western Union in 1881; Eckert worked for both men at different times and served as president of Western Union from 1893 to 1900.

“As society has come to rely increasingly on electronic communications, especially during the pandemic, this collection seems particularly relevant,” said Sandra Ludig Brooke, Avery Director of the Library. “This acquisition has great research potential, and it dovetails beautifully with the Library’s existing holdings, particularly in American technology and business enterprise.”

Daniel Lewis, Dibner Senior Curator for the History of Science and Technology at The Huntington, noted that the Thomas Edison materials in this newly acquired collection are particularly significant in the history of telecommunications. “As a young inventor, Edison had telegraphic interests that aligned neatly with his ideas on electricity and electrical transmission,” Lewis said. “In 1874, Edison developed the quadruplex telegraph—his greatest telegraphic invention. It’s hard to overstate the importance of the quadruplex. It allowed four messages to be transmitted simultaneously over the same wire. This was like going from dial-up to broadband in the telegraphic age.”

The papers reveal the behind-the-scenes machinations and struggles for control over the new technology. Given its game-changing importance, the question of ownership of the quadruplex was a critical one. Edison, who had incurred substantial debts from his other undertakings, at first hoped to sell the rights to Western Union, which was controlled at that time by industrialist W. H. Vanderbilt.

“But Western Union tried to lowball Edison, so he offered the quadruplex instead to Jay Gould, who owned the Atlantic and Pacific Telegraph Co.,” said Lewis. “The financier wanted to dominate both the railroad and telegraph business, and he’d bought up a number of companies in both fields. Getting hold of the quadruplex would pose a major threat to Western Union, which was simultaneously one of his archrivals and potential partners.”

Edison did end up selling the quadruplex to Gould, who paid him in cash and stock—a total of $10,000. This led to a squabble between Gould and Western Union, which thought it had already secured the rights. Gould then reneged on paying Edison, who sued Gould. The battle raged on for years in court. Gould ultimately prevailed over his rival by taking over control of Western Union, and Edison was finally paid for his invention.

In addition to the Edison documents, the archive includes Civil War materials that touch on military engagements during the Virginia and Maryland campaigns of 1862. Correspondence between field operators, supervisors, and the War Dept. underscore the challenges that surrounded a commercial communications service under the government contract in war time and provide valuable documentation of the work of telegraph operators and cipher men, many of whom risked their lives sending messages from the front lines. A poignant record notes the death of D. Brainard Lathrop, the first telegraphist killed in action.

“The telegraph really proved its value as a tactical and strategic communication medium during the Civil War,” said Olga Tsapina, The Huntington’s Norris Curator of American Historical Manuscripts. She cites as an example a telegram dated June 16, 1862, containing a request for a telegraph operator to work with aeronaut Thaddeus Lowe, who was conducting operations involving enemy surveillance via hot air balloon.

Many day-to-day details of telegraphic work are documented: construction and maintenance of telegraph lines; recruitment and assignment of operators; military logistics and supply lines; and the USMT operators’ relationship with the high-level military officers in command. In addition, the archive highlights the often contentious relationship between the USMT’s civilian operators and the military Signal Corps. The USMT was established in 1861 as a Western Union affiliate, an expressly civilian service that reported directly to the Secretary of War and the President—despite several attempts by the Army Signal Corps to subordinate it to the military’s command.

“The USMT handled some 6.5 million messages during the war and built 15,000 miles of telegraph lines,” Tsapina noted. “The Union Army’s use of the telegraph as a key military tool allowed it to coordinate a war effort in ‘real time’ for the first time, which ultimately contributed to the North’s victory.”

The Eckert Papers, which had been in private hands until recently, were purchased through the David Zeidberg Library Acquisition Fund and the Donald Duke Acquisition and Cataloging Endowment. Zeidberg, former Avery Director of the Library at The Huntington, had been instrumental in the 2012 Eckert acquisition.

The newly acquired Eckert archive will be available for research after processing and cataloging. The papers acquired in 2012 have been cataloged and digitized, and the online catalog entry includes a link to the digital library. Because of COVID-19 restrictions, the Library’s reading rooms are closed for in-person research.