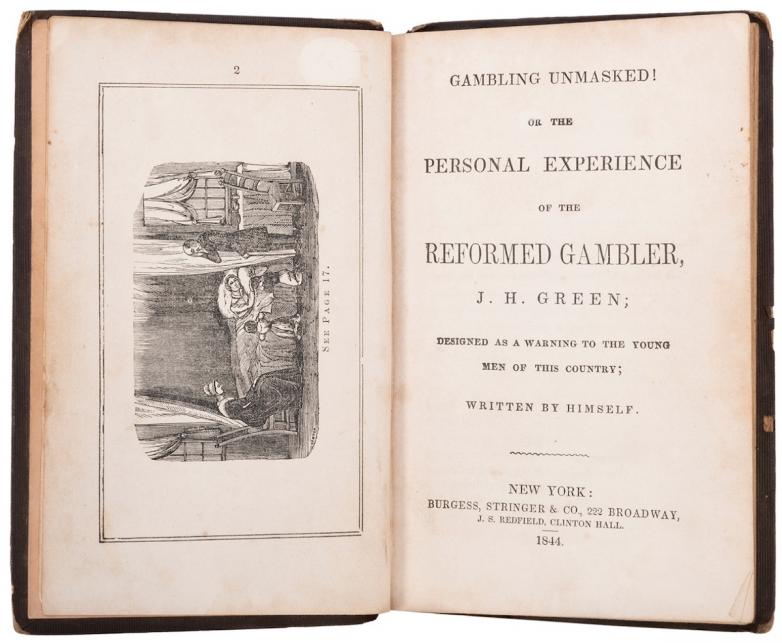 A first edition of Gambling Unmasked! Or, the Personal Experience of the Reformed Gambler (1844) by Jonathan H. Green. Estimate: $800-1,200

Chicago — Potter & Potter Auctions is pleased to announce this 700+ lot sale to be held on Saturday, January 30th starting at 10am CST. Given current public health regulations, the event will be held online and live streamed from the company's gallery. All bidding will take place through the company's website at www.potterauctions.com. Phone and absentee bids are also welcome. All items are available for in-person preview now, by appointment only.

Remarkable antique gambling accessories and devices represent many of the top lots in this auction. Some also include amazing provenance or celebrity association.

This can't miss auction also has the upper hand in the playing card category, with over 160 examples on offer.

This sale's comprehensive offering of unusual, century spanning poker chips is certain to catch the attention of collectors worldwide.

Outstanding antique publications on poker, playing cards, and cheating are well represented in this signatures sale.

Also of note in this sale are a number of fine antique gaming apparatus and coin op machines.

Antiques, ephemera, and rarities that defy standard auction categories round out this robust sale.

According to Gabe Fajuri, President at Potter & Potter Auctions, "This, our tenth annual auction of gambling memorabilia, is remarkable in that while the category is certainly not new to us, much of the merchandise in the auction most definitely is. Robert Eisenstadt had what was arguably the best collection of poker chips in America, and paging through our catalog proves it - over and over again. I expect the bidding will be fast and furious on January 30th."