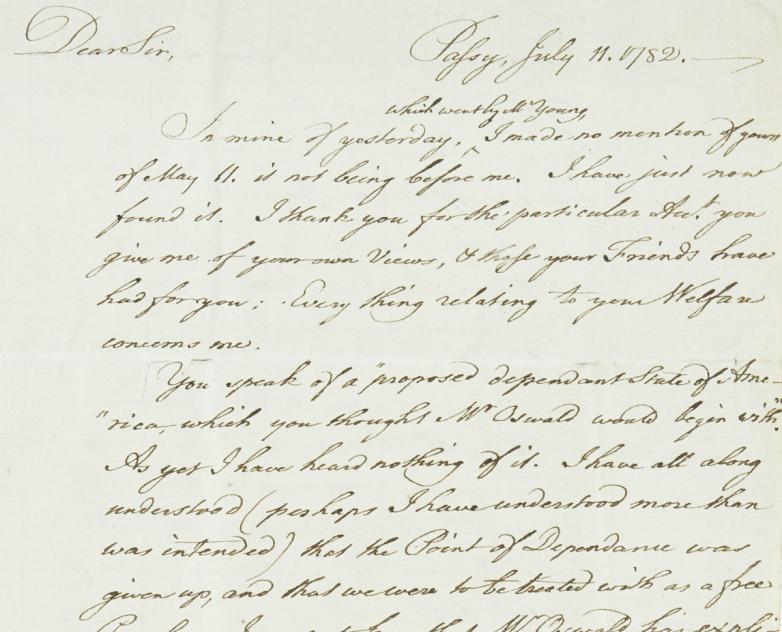 New York – In the world of international diplomacy, it is often the backstairs conversations that smooth the path to agreement. The peace talks in Paris from April 1782-September 1783 at the end of the American War of Independence were no exception, as demonstrated by two important letters from Benjamin Franklin to be offered in Bonhams Fine Books and Manuscripts sale in New York on December 15.

Franklin--one of the towering figures of the 18th century, and a key member of the American negotiating team--wrote the first letter in July 1782 as the talks were getting underway. It was addressed to his friend, Englishman Benjamin Vaughan, a close associate of British PM and lead negotiator Lord Shelburne. Asserting the primacy of American independence with delicacy but firmness, Franklin uses Vaughan as a go-between to squash the notion–dear to the heart of George III–of the UK retaining some future sovereignty in America. Franklin wrote: "If this be really his [Shelburne's] Project, our Negociation for Peace will not go very far; the thing is impracticable and impossible, being inconsistent with the Faith we have pledg'd, to say nothing of the general Disposition of our People." Shortly afterwards, Shelburne abandoned the idea. Estimate: $80,000-120,000.

The second letter, dating from June 1784, was written in response to one from David Hartley, a close friend of many years and a member of the British negotiating team. By this stage, the Independence Treaty had been agreed and signed – both Franklin and Hartley were signatories – but had yet to be ratified. Hartley had raised some last-minute minor points challenging the validity of the American ratification documents to which Franklin patiently replied with the good humour that characterised their friendship, thereby removing the final obstacles to assent. Franklin and Hartley had exchanged warm letters throughout the Revolution trying to find common ground which might bring peace, and this one represents Franklin’s final word on the subject between the two friends and negotiators, and provides a book end to a nine-year negotiation of American independence. Estimate: $70,000-100,000.

Ian Ehling, Bonhams Director of Books & Manuscripts, said: “These amazing historically important letters tell us much about Franklin’s personality, his clarity of thought and purpose, his statesmanship and his great diplomatic skills. As they show, he had a capacity for friendship which went beyond national borders – he was also of course a very successful ambassador to France – and he was able to draw on these personal relationships to nudge proceedings in the right direction behind the scenes.”

The pair of Franklin letters recently emerged from a private collection and have not been seen publicly in more than 25 years. They front an impressive section of Americana in a sale which features two more fantastic collections: Highlights from the Abraham Lincoln Collection of Louise Taper, and a collection of Pre-Raphaelite material centered on Christina and Dante Gabriel Rossetti and their family.

Highlights include:
•    The Rossetti Family at Home, an original albumen print photograph by Charles Dodgson better known as Lewis Carroll. This rarely seen image was taken in the garden of Dante Gabriel Rossetti's house on Cheyne Walk, Chelsea, London on October 7, 1863. It depicts, left to right: Christina Rossetti, Maria Francesca Rossetti, Frances Livinia Rossetti and Dante Rossetti, the latter two seated at table playing chess. Dodgson had been introduced to the Rossettis the day before the photograph was taken and he and Christina Rossetti would remain in contact over the years, with Dodgson presenting Rossetti with Alice's Adventures in Wonderland and The Nursery Alice. She, in turn, gave him a copy of her Pageant and Other Poems. The image is extremely rare – of the three known complete images of this photograph, only this and one other are in private hands. Estimate: US$50,000-70,000.
•    Portrait of Edwin Booth as Hamlet at 30 years of age was painted in 1894, a year after the actor’s death, by Gabriel Harrison, an actor, theater manager, and painter who founded the Brooklyn Dramatic Academy in 1853 and during the Civil War, launched the first American Opera Company. Booth was the most famous American actor of the age, but became more famous as the brother of John Wilkes Booth. Estimate: US$4,000-6,000.
•    Lincoln Seated. Patinated bronze, signed by Charles Keck, 1950. Height: 25-1/2 x 65 in (64.5 cm). Keck, a prominent American sculptor, produced two sculptures of a seated Lincoln: one, a youthful, clean-shaven figure pondering his future, and this version, an older, wiser figured weighed down by his many responsibilities. Estimate: US$10,000-15,000.
•    Christina Rossetti. Verses ... Dedicated to Her Mother. London: Privately Printed at G. Polidori, 1847. The Rossetti family copy of Christina’s first work published by her grandfather when she was 16 years old. With a presentation inscription from her brother Michael to his daughter, “To my very dear daughter Mary I give this, one of the few remaining copies of her Aunt's early Verses / W.M. Rossetti 22 June/95." Estimate: US$15,000-20,000.
•    Contemporary Manuscript Map of the Mason Dixon Survey, titled in cartouche, "A Map of that Part of AMERICA where a degree of LATITUDE was measured for the ROYAL SOCIETY, by Chas Mason & Jer: Dixon," c.1768. Estimate: US$8,000-12,000.