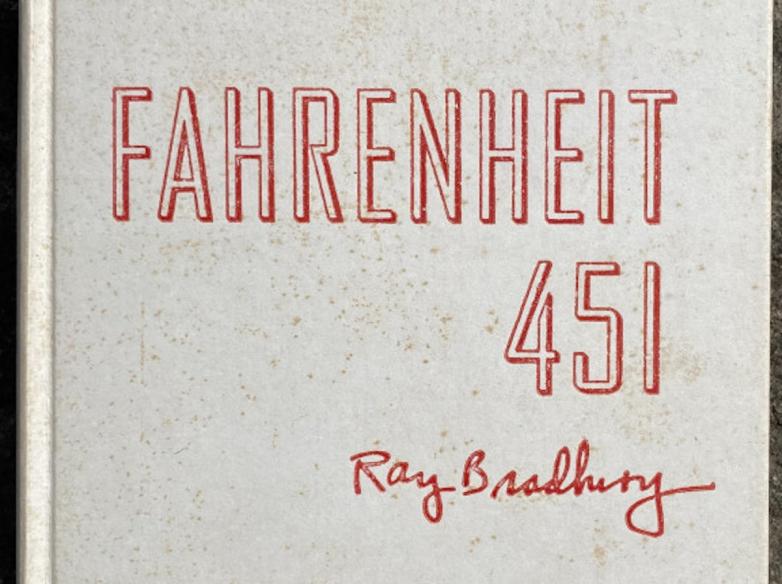 South Africa — AntiquarianAuctions.com has a new sale of Rare Books, Photographs and Original Artwork: the preview is on now and the auction will be open for bids from 12.30pm eastern time on 4th May, closing on the 11th May at the same time, 12.30pm eastern time.

The sale starts with flourish: lot 1 is the best available copy of the signed limited edition of Ray Bradbury’s Fahrenheit 451 (NY: 1953), bound in ‘Johns-Manville Quinterra an asbestos material with exceptional resistance to pyrolysis’ it is estimated at $13000 to 18000, but has a reserve at just $10,000. This is accompanied by 14 other lots of similar works, including 2 others from Bradbury (Dark Carnival [Sauk City: Arkham, 1947], and an excellent copy of the 1st paperback edition of 451 [NY: Ballantine; 1953]). These are accompanied by works from Science-Fiction and Fantasy greats such as L. Ron Hubbard (Slaves of Sleep [Chicago: Shasta, 1948, signed), Robert Bloch, Lord Dunsany, William Golding, H.P. Lovecraft, Brian Moore, Evangeline Walton, Philip Jose Farmer and A.E. Van Vogt.

A selection of modern literature follows, lot 16 is particularly notable, a huge run of one of the most important literary and critical journals of the early 20th-century: 175 issues of The Smart Set published between 1908 and 1923, and including work from a pantheon of pioneering authors, including but not limited to F. Scott Fitzgerald, Edna St. Vincent Millay, Dashiell Hammett, Sherwood Anderson, Dorothy Parker, Sean O’Casey, Ezra Pound, Damon Runyan, Jack London, Eugene O'Neill, and James Joyce. There is an excellent (but dust-jacket-less) copy of E.M. Forster’s Passage to India and an exceptional copy of a work by native American author, Dr. Charles Eastman, fully inscribed to a fellow doctor, and with a tipped-in inscribed photographic portrait of the author in traditional dress (lot 33, reserve $900, estimate $1500-2000).

The descriptor ‘bound in leather’ is interpreted in its broadest sense with lot 44 a British Regency desk-top writing cabinet – ‘shabby-chic’ of the highest order and reserved at just $900 (estimate $1500-2000). This lot is accompanied by a number of more traditional leather-bound lots, including a large-scale 3-volume Bible (Cambridge, UK: 1830) whose visual appeal is arguably outdone by the family record of vaccinations it contains (in addition to the more usual births, marriages and deaths).

The search for the unique is a perennial quest: the sale includes at least 30 lots which fit the bill. From a 9-year old boy’s scrapbook of the election where FDR trounced Hoover, to a large ‘Spencerian’ calligraphic artwork / advertisement, from 1860 or shortly afterwards; from a signed manuscript poem by Verlaine (in a signed, limited copy of his ‘Dedicaces’) to a folio of original designed by an Oxford graduate for a Dramatic Society production of Ibsen’s The Pretenders (Lot 50, by William Gaunt, with a reserve at $750, and an estimate of $1200-1800). There is also a wide-ranging business archive featuring the Driggs family and their various companies (lot 49, reserve $750, estimate $1500-3000), which can be contrasted with Venetia Stanley’s transcriptions of some of Herbert Asquith’s letters to her, when he was Prime Minister of Great Britain, and covering  just over 2 weeks in July 1914, just before the outbreak of WW I – one of the most resonant quotes “So we are within measurable distance of a real Armageddon” (Reserve $700 est.: 1000-1500).

Speaking of Armageddon: lot 52 is Film Director Cecil B. De Mille’s copy of John Martin’s visionary Biblical landscapes (res. $600 est.: $800-1200), including Moses arranging for God to inundate the Pharoah and the Egyptian host – a scene which the director lifted and recreated almost exactly with Charlton Heston standing in for Moses.

Lot 171 is both a beautiful collection in its own rite and a demonstration of the working methods of the innovative Dover Publications enterprise: see the catalogue for more details, but it includes a full set of the plates from Henri Matisse’s Dessins, Themes et Variations (Paris: Martin Fabiani, 1943) – reserve 750, est: $2000-4000).

From about lot 187 onwards the focus shifts onto photographs, albums-full and single examples, as well as books on photographs and on photographers and their work – lot 188 is a prime example: Edward Weston’s My Camera on Point Lobos (Boston, etc: 1950. Reserve $600 estimate $800-1000), aspiral bound and with the rare original box.