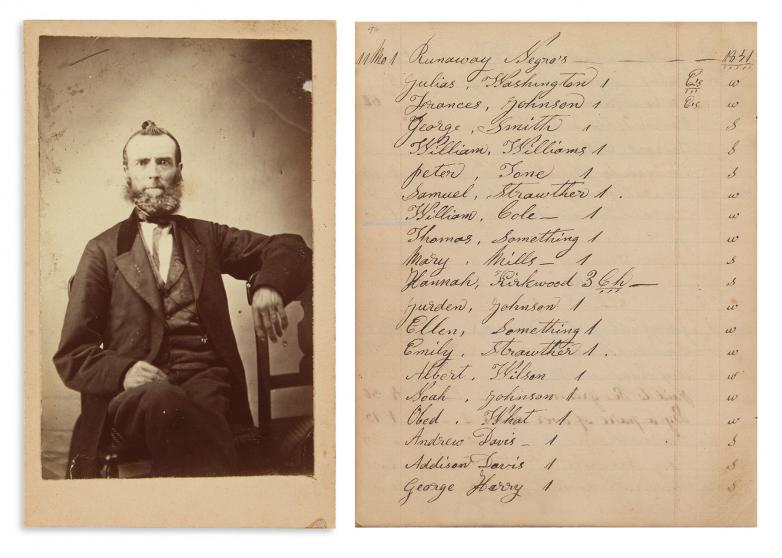 New York -- Covering five centuries and the entire Western Hemisphere, Swann Galleries’ sale of Printed & Manuscript Americana is set to come across the block on September 26. Highlights include archives documenting slavery and abolition, printings of the Declaration of Independence, Civil War diaries, quality Utah and Mormon material, as well as Latin Americana.

An extensive and detailed record of the Underground Railroad is set to come across the block in an archive that once belonged to the Shugart family. Zachariah Taylor Shugart was a known agent of the Underground Railroad circa 1840-51. The documents include his account book listing 107 passengers Shugart helped from 1841-43. Early entries in the log give complete names, such as Samuel Strawther, while others are incomplete or more evocative, including “Ellen Something” and “North Star.” Additional material includes letters from Shugart’s son during the Civil War and a pocket diary kept by Shugart. The archive, containing 63 items, is estimated at $30,000 to $40,000.

Substantial business records from the Dickinson & Shewsbury salt works in West Virginia are also featured in the sale. The archive contains more than 2,000 items, documenting numerous enslaved people who aided in the salt production. Most notably are records of family members of Booker T. Washington, who lived in the area after abolition. The historic lot is expected to bring $80,000 to $120,000, a testament of its potential for scholarship.

Manuscript diaries from Civil War soldiers in various parts of the country paint a picture of the war from February 1862 to September 1863. Samuel Walker’s diary, dated February 8, 1862 to September 1, 1863, chronicles his time as a Navy seaman during the entire first cruise of the USS Kineo. Walker recounts the battles he encountered as the gunboat sailed down the Mississippi: the battle of April 24, 1862 as the USS Kineo made its way past Confederate’s Fort Jackson en route to New Orleans and the Battle of Baton Rouge. The lot also includes an additional manuscript account book and memoranda pages dating as early as 1854 ($10,000-15,000). Also of note is Adam Reinoehl’s lively recordings of his time in the 76th Pennsylvania Infantry, also known as the Keystone Zouaves, from February 6, 1862 to September 6, 1863 in Georgia and South Carolina. In the rear pages of the volume Reinoehl sketched Fort Pulaski before and after its reduction by the Union artillery in April 1862, as well as small churches in Legreeville, SC and his camp headquarters at Hilton Head, SC ($2,500-3,500).

From the Western Americana Collection of Herbert S. Auerbach, the heir to a successful Salt Lake City department store and notable collector of early Mormon and Utah history, comes a choice offering. An 1845 Nauvoo Legion Association stock certificate signed by Brigham Young is present at $8,000 to $12,000; an early imprint of the First Annual Message of the Governor to the Legislative Assembly of Utah Territory, from Young’s time as Governor in 1851, is present at $3,000 to $4,000; and a first edition of The Pearl of Great Price, 1851—one of the cornerstone works published by the early Latter Day Saints and the only edition in English until 1878—compiled by Franklin D. Richards, is estimated at $4,000 to $6,000.

Exhibition opening in New York City September 21. The complete catalogue and bidding information is available at www.swanngalleries.com and on the Swann Galleries app.