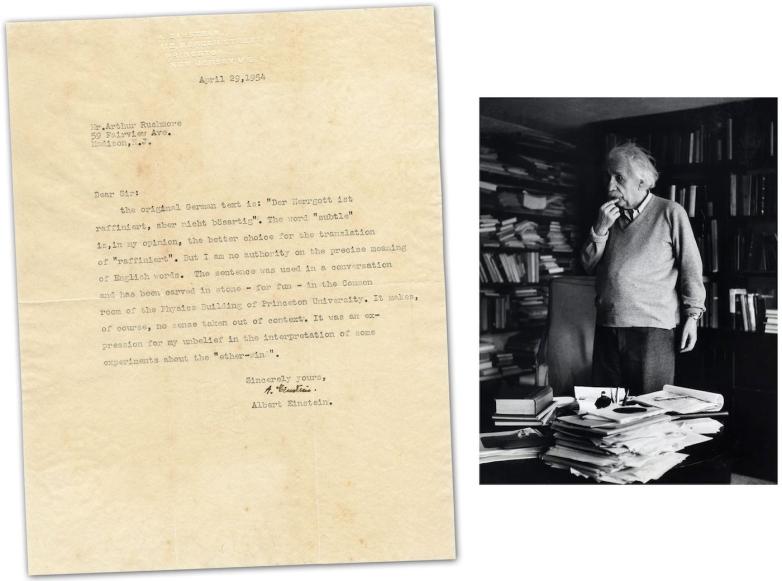 Typed letter signed by Albert Einstein concerning God and science and pertaining to one of his most famous quotes, “Subtle is the Lord, but not malicious.” Estimate: $60,000-70,000

Wilton, CT – Extensive and historically significant archives pertaining to Civil War generals (one for the Union, one for the Confederacy), a typed letter signed by Albert Einstein concerning God and science and pertaining to one of his most famous quotes, and Bob Dylan’s handwritten lyrics to the timeless classic The Times They Are A-Changin’ are just a few of the highlights in University Archives’ next big online-only auction, slated for Wednesday, June 22nd.

The Rare Autographs, Manuscripts & Books auction, starting promptly at 10:30 am Eastern time, features historical material from multiple collecting categories. All 481 lots are up for viewing and bidding now (on the University Archives website www.UniversityArchives.com), as well as LiveAuctioneers.com, Invaluable.com and Auctionzip.com. Phone and absentee bids accepted.

“The June 22nd auction is particularly rich in presidential, science, Civil War, art and music autographs and memorabilia,” said John Reznikoff, the president and owner of University Archives. “Collectors of aviation/space, sports, early American, literature, and international will also have ample opportunity to enrich and expand existing collections. It’ll be a great sale.”

In a typed letter in English, signed and dated April 29, 1954, Albert Einstein explains the origins of his scientific motto, “Subtle is the Lord, but not malicious,” which encapsulates his personal attitude towards God and spirituality. Einstein first used the motto when responding to another scientist’s claims to have disproved relativity by discovering “ether-drift” (est. $60,000-$70,000).

In another Einstein-related item, a signed a first edition copy of his German language book Mein Weltbild (or The World As I See It) contains an inscription in which Einstein refers to the “Fall of the German Goyim.” It is the only instance known where Einstein employs the controversial Hebrew / Yiddish word for Goyim, or “non-Jew” (est. $12,000-$14,000). The book is from 1934.

Bob Dylan wrote The Times They Are A-Changin’ in the fall of 1963, shortly after Martin Luther King Jr.'s March on Washington, wanting to create an anthem for social justice. The singer’s handwritten lyrics, penned on one page in 2013 on “The Dorchester” stationery from London, is accompanied by a full LOA from JSA (est. $50,000-$60,000).

America’s most famous presidents will be represented in the sale by the following offerings, among many more:

A large archive of notes and drafts of speeches pertaining to Black Panther Eldridge Cleaver, plus more routine notes, spanning a dozen years (1976-1988), comprising 42 pages and more than 2,000 words, should realize $15,000-$20,000; while a 1790 U.S. Treasury Department circular handwritten and signed by Alexander Hamilton (as “A. Hamilton”), regarding the documentation of tonnage of imports and exports, is expected to make $12,000-$15,000.