Contemporary Illustrators and Their Childhood Art Online at the Carle Museum 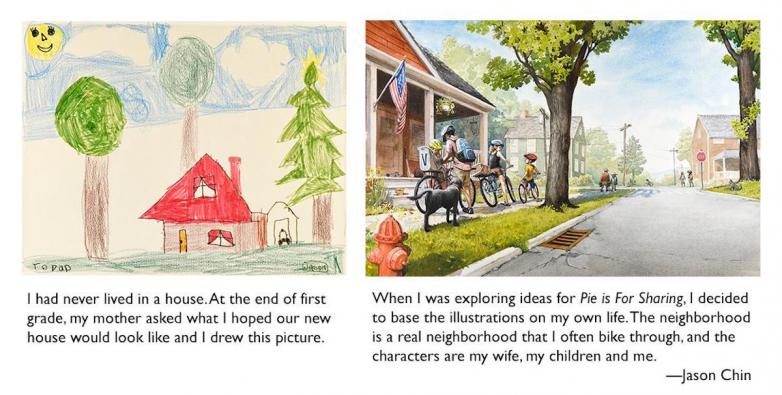 Amherst, MA – The Eric Carle Museum of Picture Book Art launched its second online exhibition today, September 30, 2020. Now & Then: Contemporary Illustrators and their Childhood Art debuted last year at The Carle, but closed early due to the pandemic. The Museum is now pleased to offer this popular exhibition online.

What can the art of childhood reveal? Does it show burgeoning talent, exciting potential or, perhaps, simply the beginning of a love to create? These are some of the questions explored in an exhibition co-curated by award-winning illustrators Grace Lin and Jarrett J. Krosoczka. Together, with 17 other artists, they honor childhood creativity in Now & Then: Contemporary Illustrators and Their Childhood Art. Viewers see examples of each artists’ childhood drawings and how they foreshadow their current artistic interests. From stick drawings and crayon animals to beautiful watercolors and digital illustrations, the pairings inspire young viewers to make connections to their own creations--and their future potential.

In addition to Lin and Krosoczka’s own work, the featured artists include Cece Bell, Nidhi Chanani, Jason Chin, The Fan Brothers, Julie Flett, Jeff Kinney, Elisa Kleven, Barbara Lehman, Rafael López, Oge Mora, Juana Martinez-Neal, Raúl the Third, Shadra Strickland, Don Tate, Evan Turk, and Tillie Walden. Lin and Krosoczka selected artists working in myriad formats—picture books, chapter books, and graphic novels—and chose contemporary artists since “one of the purposes of the exhibition is to show kids where their own artistic journey could take them, and if the artists are familiar to them, then the pairings of childhood and professional artwork becomes much more resonant,” notes Lin, “That said, I also hope the exhibition introduces people to some new favorite illustrators too.”

Despite the different book forms and artistic styles, certain similarities among the artists soon became evident to the curators. Lin observes that many of the artists made books as children. “As someone who was folding and stapling sheets together for a book as a child,” she said, “I find it charming that so many of us were already in love with bookmaking.” Krosoczka makes another connection: “It’s amazing how much work from childhood was archived by these artists and their families.”

Planning for the exhibition proved a trip down memory lane for several of the featured artists. Oge Mora, author and illustrator of Thank You, Omu!, recipient of a 2019 Caldecott Honor Award, pairs a cut-paper collage from the book with a self-portrait completed in first grade. Mora recalls how proud she felt seeing her six-year-old brown face on the page: “My skin, my story, were things to be celebrated,” she observes. “It is interesting looking back at this early class project and reflecting on how much a later class project [in college] became my very first picture book, Thank You, Omu!”

Jeff Kinney, best known for his cartoon-style illustrations in the popular Diary of a Wimpy Kid series, may have the most dramatic change from childhood. Kinney submitted a hyper-realistic graphite drawing of Bedouins that he made at age 11, although it looks executed by a much older artist. He pairs it with a humorous, frenetic scene from Diary of a Wimpy Kid: The Meltdown, in which Kinney deliberately adopts a childlike style.

Brothers Terry and Eric Fan illustrated their dinosaur story, Many Years Ago, when they were ages four and five. Their mother helped them spell out the text and staple the book together. “Mom always encouraged us to tell stories, even as kids. She was our biggest champion as far as our art,” said Terry in a Publisher's Weekly interview. Terry and Eric include a facsimile of Many Years Ago in the exhibition paired with an artwork depicting dinosaur topiary from The Night Gardener, their first published picture book. “A lot of time has passed between the two books, but I like to think they share a common thread,” says Eric.

Elisa Kleven’s childhood artwork, done at age eight, is a birthday card for her mother. It shows a pastoral landscape of farms and horse-drawn wagons. Kleven says, “Growing up in sprawling, smoggy, 1960s L.A., I often wished I could live in the worlds of the books I loved, where animals talked, humans were closely intertwined with nature, cars had not yet been invented, and seasons changed. Because I couldn’t live in these places, I created them in my drawings.” Kleven’s adult illustration, from her recent publication Hiro’s Hats, is a masterful, textural collage of snow monkeys frolicking in cherry blossom trees. She observes, “A visual echo of my mother’s birthday card can be seen in the top right corner, where a mother snow monkey and her child sit happily in a blossoming tree.”

Lin and Krosoczka are former classmates at the Rhode Island School of Design (RISD). As alumnae, they curated two shows at RISD, including one on the same premise. “Every artist has their own journey to travel and there is no way to know where the path will go,” say the artists. “But by connecting these childhood works to those made in adulthood, we hope to show young artists what is possible, and what could be just beyond the horizon.”

The Carle’s chief curator Ellen Keiter says, “The pandemic has forced us to rethink the ways we present exhibitions like Now & Then. We were disappointed to close the show early, but this virtual version is evergreen and will be able to engage many more people over time. We are grateful to the artists for their enthusiasm and support to re-envision the exhibition in a digital format.”