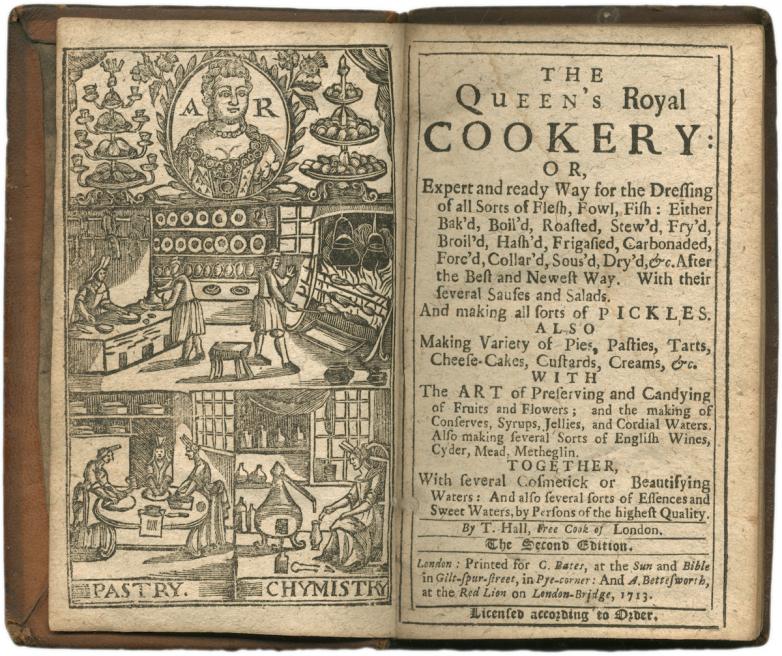 London — If we think that eating healthily and economically are modern preoccupations, we should perhaps think again. A stunning, and historically important, collection of antiquarian cookery books and manuscripts, to be sold at Bonhams Fine Books and Manuscripts sale in London on Wednesday 19th August, shows our forebears were just as concerned as we are about their diets and how to manage on a budget.

The collection was put together over many years by Ruth Watson, who with her husband David, ran Hintlesham Hall in Suffolk for many years and is now the owner of the newly opened Watson and Walpole restaurant in Framlingham. Ruth is also well-known for presenting the television programmes, The Hotel Inspector and Country House Rescue.

In an introduction to the sale, Ruth recalls the appeal of old cookery books. “I already owned several hundred modern cookery books, but I think it was the time I was spending in antique shops, buying paintings and furniture, that was the catalyst to collecting antiquarian volumes. I grew to love the feel of a worn calf-bound volume with its tobacco-dry pages and happily wondered about the authors of the myriad inscriptions and amendments.”

Bonhams senior book specialist Simon Roberts said, “Time and again while I was cataloguing this wonderful historic collection, I was struck by the number of refences to economy, frugality and health and the parallels with our own times. The role of food, not only in keeping well but also in warding off disease and aiding recovery, is a constant theme. Some of the suggestions may strike us as outlandish, but others are a good deal more sensible than the fad diets of today.”

In addition to copies of works by well-known writers such as Mrs Beaton and Eliza Acton, and early books on Indian and Chinese cuisine, the many highlights include:

•    A handwritten recipe and household book kept by the Croft family of Stillington Hall, North Yorkshire, from the mid-18th to the mid-19th centuries written in several hands, including French and Indian recipes. The Crofts were part of the famous wine-shipping dynasty and the book contains some wonderful recipes including "Mrs Haslers receipt for a thick cream cheese" ("...take the mornings milk of 7 cows & the night’s cream of 7 cows...")  which would not sit well with the government’s anti-obesity campaign, and a recipe for raisin wine that involves a hundred weight of Raisins, twenty gallons of Water and one gallon of French Brandy. No wonder someone wrote ‘excellent!’ in the margins. The novelist and local vicar Laurence Sterne was a good friend of the Crofts and often dined with them, sampling perhaps some of the dishes in the recipe book. Thomas Croft is widely recognised as having saved the manuscript of Sterne’s masterpiece, Tristram Shandy from certain destruction. After a fine dinner at Stillington, Sterne read an early draft of his novel to the assembled company. Replete with food and wine, the audience started to fall asleep and Sterne – never the most even tempered of men -- threw the manuscript on the fire from which it was rescued for posterity by the quick-witted Thomas Croft. Estimate: £2,000-3,000.

•    The Closet of the Eminently Learned Sir Kenelme Digby Kt. Published in 1677, the book by Sir Kenelm Digby contains instructions on cooking methods, making alcoholic drinks and a warning against leaving tea to stand too long. 'The water is to remain upon it no longer than whiles you can say the Miserere Psalm very leisurely.' Estimate: £500-700.

•    The Farmer's Wife; or the Complete Country Housewife attributed to Richard Harvey.  This scarce manual of husbandry, brewing, beekeeping and cookery belonged to the famous English poet William Cowper (1731-1800) who revolutionised the poetry of his time by writing about everyday scenes of English country life.  Estimate: £400-600

•    The Castell of Health, Corrected, and in Some Places Augmented by the First Author thereof, by Thomas Elyot.  This 1595 edition of  Elyot's Castel of Helth, first published in 1539, completed the trilogy of his major works, providing advice as to the uses and effects of different foods and diets "so that English men and women may understand and regulate their health accordingly.’ Estimate: £2,000-3,000

•    An 18th century collection of handwritten recipes including advice on making Everton toffee, making a strong broth when in haste – the stock cube of its day  -  and, at the end of the book some pages devoted to medicinal recipes, including  "Powder for the teeth to fasten them and make them white", and a concoction of herbs and spices, mithridate, treacle and aquavita, - "...good against the common plague, but also against the sweating sickness, the small pox, measles and surfeits.” Estimate: £1,000-2,000.

•    Professed Cookery by the aptly named Ann Cook. The author devotes the 78-page preface to a vitriolic attack on The Art of Cookery by her great rival Hannah Glasse’s, demonstrating that spats between celebrity chefs are nothing new.  Estimate: £400-600.

A link to the online catalogue to the book sale can be found here: https://www.bonhams.com/auctions/26014/