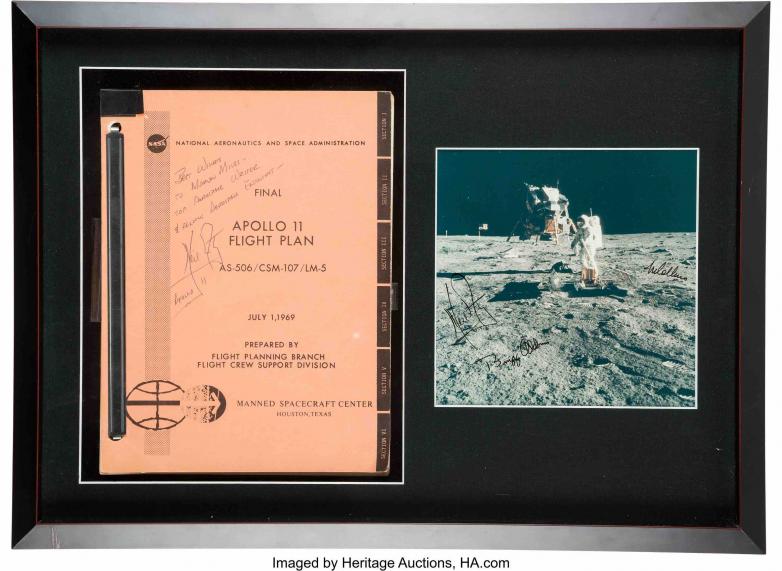 Dallas – For years, countless people wondered whether humans could reach and land on the moon. Now a copy of the flight plan for the mission that answered that question once and for all – a copy signed by the first man to set foot on the moon – will be featured in Heritage Auctions’ Space Exploration Auction June 5 in Dallas, Texas.

Apollo 11: NASA "Final Apollo 11 Flight Plan AS-506 / CSM-107 / LM-5" July 1, 1969-dated Book Signed by Neil Armstrong to Los Angeles Times Aerospace Editor Marvin Miles, with Crew-Signed Lunar Surface Color Photo, in Framed Display (estimate: $40,000+) is an absolute rarity that Armstrong signed and gave to Miles, who as one of the country’s top space journalists was something of a celebrity in his own right. Miles, who died in 1994, was described in his obituary in the Times as someone who “...flew with Howard Hughes, was on a first-name basis with such aviation pioneers as Donald Douglas and the Lockheed brothers and was among the first reporters to witness both atomic and hydrogen bomb explosions..."

Any Flight Plan is a blueprint for a mission. This 8-by-10-1/2-inch copy laid out is signed neatly in 1974 on the front cover in black ink: “Best Wishes/ to Marvin Miles--/ Top Aerospace Writer/ & Fellow Aerospace Enthusiast/ Neil Armstrong/ Apollo 11.” This book is housed in a 20-by-15-inch matted shadow box that also includes a color photo of Buzz Aldrin on the moon, setting up an experiment with the Lunar Module Eagle visible in the background. The photo is signed: “Neil Armstrong,” “Buzz Aldrin” and “M Collins.”

“The significance of this Flight Plan is impossible to overstate,” Heritage Auctions Space Exploration Director Michael Riley said. “This is a copy of the flight plan for the most important space flight ever flown, and signed by Armstrong, who took the first steps on the moon. This is the plan that proved travel to the moon was possible, and became the blueprint for future trips into space.

“This is a copy of a Flight Plan with huge historical importance, a museum-worthy lot that can be the centerpiece of the most serious of collections.”

In 2014, Heritage Auctions sold a 1974-dated Neil Armstrong Typed Letter Signed that was originally sent with this signed Flight Plan. A printed copy of that letter is included with this lot. The letter read: “Dear Marvin: It is a pleasure for me to hear from you and return the Flight Plan cover with signature. It appears that aviation is alive and reasonably well out your way; at least well enough to keep you busy. Sorry we missed each other recently, but I certainly would much rather fly the Concorde than sit around in a TV studio. Maybe next time. All the best.
[signed] Neil
Neil A. Armstrong Professor of Aerospace Engineering.”