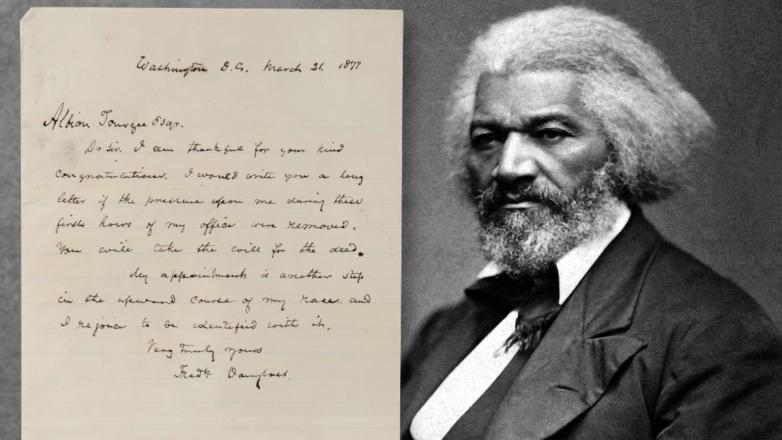 Boston — RR Auction's first sale of the New Year is led by leaders: icons of the Civil Rights movement, political powerhouses, and social activists that brought about positive change with online bidding through January 13.

Among them is a Frederick Douglass one-page handwritten letter to attorney and pioneering civil rights activist Albion Tourgee, who would later litigate the landmark Plessy v. Ferguson case. In part: "My appointment is another step in the upward course of my race and I rejoice to be identified with it."

At this time, President Rutherford B. Hayes had just assumed office and appointed Douglass as United States Marshal for the District of Columbia—the highest political office to be held by an African American at that point. Douglass accepted the commission and became the first African American confirmed for a presidential appointment by the US Senate. Recognizing it not just as a personal achievement but "another step in the upward course of my race," Douglass remained in the position until 1881, when he was made recorder of deeds for the District of Columbia. (Estimate: $15,000+)

A Martin Luther King, Jr. typed one-page letter on Dexter Avenue Baptist Church letterhead, dated January 12, 1959. Letter to Mrs. Edmund Mahon, in full: "Thanks for your very kind letter and your encouraging words concerning my book, Stride Toward Freedom. This book is simply my humble attempt to bring Christian principles to bear on the difficult problem of racial injustice which confronts our nation. I hope that in some way it will contribute to a peaceful solution to this problem. It is certainly gratifying to know that you found the book helpful. I was especially happy to know that you are from Alabama and that your views are so thoroughly Christian on this issue. Let us continue to hope and pray that the Spirit of Christ may reign in our midst, and that we will be able to rise from the darkness of man's inhumanity to man to the bright daybreak of Freedom and Justice for all."

Published in 1958, King's first book, Stride Toward Freedom: The Montgomery Story, chronicles the planning, events, and aftermath of the first successful large-scale application of nonviolent resistance, the year-long bus boycott in Montgomery, Alabama. A comprehensive and insightful account, the book traces the journey of a community and highlighted King's transformative devotion to equality and non-violence. Addressed to an Alabama native and eloquently outlining the religious ideals that informed King's activism, this is an outstanding early letter by the revered Civil Rights leader. (Estimate: $12,000+)

Also featured is a Malcolm X four-page typed letter signed "Malcolm X," dated March 25, 1959. Letter to his prophet and teacher Elijah Muhammad, touching on deeply private subjects relating to his wife and marriage. Addressing the topic of his "down hill marriage," Malcolm recounts the dispassionate atmosphere surrounding his engagement to Betty Shabazz, the revelation that he may not have been ready for such a domestic partnership, and the frank disclosure of intimate marital problems: "The main source of our trouble was based upon SEX." Discussing feelings of inadequacy after her accusations of impotence, a tiring pregnancy, and worried that problems at home will have an effect on his work, Malcolm X looks to Elijah Muhammad for guidance and hopes that he will be able to speak with Betty.

This letter makes plain the type of confessional relationship Malcolm had with Muhammad, and communicates the level of discipleship he held for the man and the cause of the Nation of Islam. This tone is all the more notable given that in a few short years, Malcolm would lose faith in Muhammad—based in part on accusations of sexual misbehavior against Muhammad made by young NOI secretaries—and very publicly remove himself from the association, ultimately prompting his own death by assassination. Thanks to his uncompromising stand for social justice, Malcolm X now stands as a mythic figure of the Civil Rights Movement; this letter stands as a testament and reminder of the very human identity behind the icon. (Estimate: $40,000+)

Other top lots include an important F. Scott Fitzgerald letter about This Side of Paradise, a first edition of Herman Melville's Moby-Dick, a rare Al Capone Document, a fully signed example of Nirvana's breakthrough 'Nevermind' album, and an exceedingly rare check signed twice by Nikola Tesla.

Online bidding for the Fine Autograph and Artifacts sale from RR Auction began on December 18 and will conclude on January 13.

Join us as we make history selling history in January 2021.