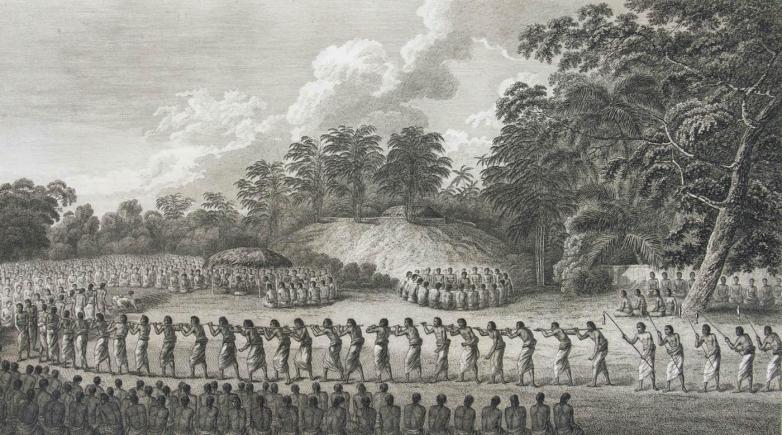 At the CA book fair, Shapero Rare Books will offer The Voyages of Captain Cook, a complete set of Cook’s three voyages through the Southern Hemisphere by John Hawkesworth. Printed in 1773, 1777 and 1784.

Oakland, CA – After a two-year pandemic hiatus, the 54th California International Antiquarian Book Fair returns to the Bay Area on Friday, February 11 through Sunday, February 13, 2022, at the Oakland Marriott City Center with collections and treasures from over 100 booksellers. Among the rich selection of thousands of books, maps, manuscripts and ephemera are some extraordinary items that tell fascinating stories or offer nuanced glimpses into our history. These include a collection of hundreds of works tracing the history of climate change; a 438-year-old copy of the world’s first modern atlas; and an early edition of the complete works of Geoffrey Chaucer complete with readers’ notes and an erotic illustration in the margins. For those who cannot attend in person, the ABAA California Virtual Fair will take place from 9 a.m. (PST) February 12 until 5 p.m. (PST) February 14 and will be accessible at abaa.org/vbf.

Sponsored by the Antiquarian Booksellers’ Association of America (ABAA) and the International League of Antiquarian Booksellers (ILAB), the three-day Book Fair offers a rich selection of manuscripts, early American and European literature, modern first editions, children’s books, maps and autographs, as well as antiquarian books on history, science, law, architecture, cooking, wine and a wide range of other topics. Some of the notable items include:

·         One Hundred Seconds to Midnight – A seminal collection of original works charting the history of climate change curated by Peter Harrington. Featuring more than 800 first edition books and maps, photographs, artwork and more, the collection charts the terminology, science and observations that have shaped our understanding of the modern environmental movement and climate change. (Offered at $2.2 million by Peter Harrington, London)

·         The Voyages of Captain Cook – A complete set of Cook’s three voyages through the Southern Hemisphere by John Hawkesworth. Describes voyages made in the Dolphin, Endeavour and Swallow. Printed in 1773, 1777 and 1784. (Offered at $47,000 by Shapero Books)

·         Big Rock Candy Mountain – Perhaps fueled by an evening of cocktails, Wallace Stegner and his best friend Bernard DeVoto “inscribed” Stegner’s monumental, semi-autobiographical novel with the autographs of Wally DeVoto and Benny Stegner, a mash-up of their names. (Offered by Carpe Diem Books)

·         My First Summer in the Sierra – John Muir’s love-at-first-sight memoir of his 1869
mountain adventure based on his journals and drawings. Includes an extraordinary collection of wood engravings depicting the Sierra from the Coulterville foothills to Tuolumne Meadows. (Offered by Carpe Diem Books)

·         Theatrum Orbis Terrarum – Four centuries before the first Google Map, Abraham Ortelius created one of the earliest modern world atlases, featuring the first Western map of Japan and China and the first appearance of maps of Florida, Peru and Northeastern Mexico. Published in 1584, and exquisitely colored and highlighted in silver and gold in a luxury publisher’s binding. (Offered at $265,000 by Sokol Books)

·         Desengano Dos Peccadores – A gruesome how-to from 1765 depicting the Jesuit torture of Brazilian natives in their quest to convert them to Christianism. The depictions were so appalling (and accurate) that the powers-that-be tried to censor the book and destroy all copies. (Offered by the new Italian bookseller Orsi Libri)

·         British Spy Archive – An original, first-person espionage archive from British Brigadier General Frederick William Henry Walshe from when he was a Major in the Indian Army Intelligence. The archive provides a window into pre-WWI British intelligence as it relates to colonial policy at the intersection of China/India/Burma/Afghanistan. (Offered by Geographicus Rare Antique Maps)

·         The Republic of Dreams by Bruno Schulz – One of just 36 copies of the book by the celebrated Polish writer and artist, translated by Madeline Levine with etchings by Thomas Wood.  (Offered by Swan’s Fine Books)

·         Le debat du vin & de l’eaue (The Debate of Wine and Water) - A remarkably fine copy of the first book published on wine in French from 1515. At its beginning, the debate between wine and water was in Latin and it was one of the popular poems from the Goliards, wandering medieval scholars who were famous for spending as much time in taverns as they were in the classroom. Their poems were part of a popular oral tradition that included everything from songs about women, wine, and gambling to satires about society, mortality, and the church. (Offered at $60,000 by Ben Kinmont, Sebastopol)

This year’s Book Fair will also include a major historical exhibit on wine and viticulture, courtesy of the library at the Shields Library, University of California, Davis. In addition to books and journals, the Shields Library collection includes maps, pamphlets, wine labels, wine merchant and wine auction catalogs, menus and manuscripts from renown grape and wine scientists, papers of wine writers and the archives of the Bureau of Alcohol, Tobacco and Firearms (BATF) and the Wine Institute. A selection from the collections will be on display at the Book Fair in Oakland, along with book-related lectures and displays.

In recognition of the next generation of bibliophiles, the California Book Fair is pleased to host the collection of Stacy Shirk, the winner of this year’s California Young Book Collectors’ Prize. The competition was open to collectors living in California aged 35 and under. Ms. Shirk’s collection features books of fairy tales as “cultural and historical touchstones," reflecting transformations in society, such as Jewish tales published in the traumatic 1940s, or new twists on old standards that appeared after the rise of second-wave feminism.

To provide the safest and most positive experience possible the California International Antiquarian Book Fair organizers are strictly following the most current Covid-19 capacity rules and guidelines from the State of California, Alameda County, and the CDC. Show management will continue to monitor these recommendations and reserves the right to modify the Attendance Procedures and Guidelines for the fair accordingly. You can find the Book Fair’s Covid-19 protocols on their website. 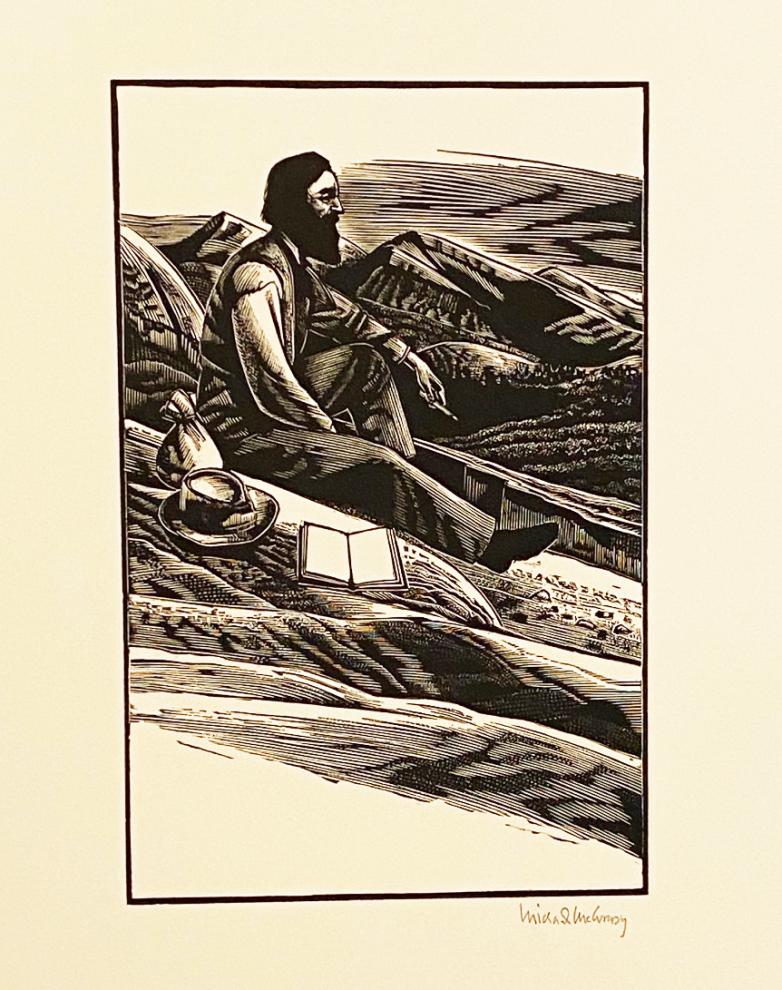 Carpe Diem Books will offer a woodcut-illustrated edition of John Muir's My First Summer in the Sierra.

The Book Fair’s schedule will include the following events and special exhibits, free with Fair admission:

In 2018, the UC Davis Library began to expand its Wine Writers Collection, which includes the papers and digital files of people who have written or podcasted about California wine from the 1950s to the present. The writers' archives extend the literary works in the library’s circulating and rare wine book and manuscript collections, which date to the start of the twelfth century. UC Davis's wine library documents the evolution of a genre and of a drink that's both agricultural product and art. This lecture is jointly sponsored by the Bibliographical Society of America and the Antiquarian Booksellers' Association of America.

Jullianne Ballou As the first Warren Winiarski Fellow at the UC Davis Library, Jullianne Ballou curates the library’s Wine Writers Collection. Previously, she was a librarian at the Harry Ransom Center, and before that, worked with writers as an editor of the Oxford American magazine and books published by The University of Texas Press.

The grape and wine collections at the UC Davis Library are widely regarded as the finest in the world. Drawing on rare books and items featured in the special exhibit, Axel Borg, Bibliographer Emeritus, will talk about the breadth and depth of the wine collections at UC Davis as well as how the collections were built. Christine Cheng, Instruction and Outreach Librarian, will discuss the materiality of items and how they are used in the context of instruction.

Christine Cheng is the Instruction and Outreach Librarian for Archives and Special Collections at the University of California, Davis. She designs library services and education programs that enhance access to and understanding of rare books, manuscripts, and archival materials. Her interests are promoting and developing skills in primary source literacy.

Axel Borg After graduating from Pomona College in 1976, Axel was commissioned in the United States Army as an Armor Officer. In 1983 he left the Army to become a librarian. Axel earned his MLIS at UC Berkeley and served as an agriculture librarian at Berkeley. In 1986 Axel took a position as a general science librarian at UC Santa Cruz and in 1988 he began his service at UC Davis as the Wine and Food Science Bibliographer. While at UC Davis, Axel worked with Professor Maynard A. Amerine and was co-author on his last book, A Bibliography On Grapes, Wines, Other Alcoholic Beverages, And Temperance Published In The United States Before 1901, published by UC Press. Axel retired from UC Davis after 37 years of service as a librarian in the UC System.

The speakers will feature a selection of original ephemera from Oakland’s many historical social movements, discussing how these materials bring alive the people and events of the past while highlighting their continuing relevance to contemporary society. When working with the relatively recent ephemeral materials of social movements, why do we collect, how do we collect, what do such collections mean for our understanding of the past - and how can a budding collector get started?

Lisbet Tellefsen, former publisher of the Black lesbian journal Aché, has become a noted archivist of materials from the Black Panther Party and other activist organizations. Many items from her collection are now at the Smithsonian National Museum of African American History and Culture, and her papers now reside at Yale University’s Beinecke Library. The recent book “Seize the Time” is based on her extensive archive of materials related to the activist Angela Davis.

Alexander Akin, co-owner of Bolerium Books, has gone from producing and distributing material as an activist, to collecting it as a historian (he received his PhD in East Asian Languages and Civilizations from Harvard University in 2009), to selling it as a dealer. His recent projects include an emphasis on Asian American activism in the Bay Area.

Sherlock Holmes first appeared in 1887 during the 50th year of the reign of Queen Victoria. No 19th century reader would have thought that this literary juggernaut would be just as alive for 21st century readers as it was for them. This durability is in no small part a result of how profoundly the Great Detective has permeated popular culture. In this presentation, Grolier Club member Glen S. Miranker will explore how Holmes has left his mark on popular culture over the last 135 years in books, radio, movies, advertising and our language.

Glen S. Miranker After co-founding and/or serving in executive positions at several Silicon Valley start-ups, Glen Miranker was invited by Steve Jobs to join Next Computer in 1990 and Apple Computer in 1996. For most of his tenure at Apple, he ran hardware development and served as Apple’s Chief Technology Oﬃcer (Hardware), retiring in 2004. Long a bibliophile, Miranker now devotes himself to book collecting, lecturing and assisting special-collections departments and boards at such institutions as the Houghton Library of Harvard University, the Toronto Reference Library (Toronto), the Harry Ransom Center (University of Texas, Austin) and the Newberry Library (Chicago), among others. He also collects and lectures on the history of cryptography and is a director of the National Cryptologic Foundation (Ft. Meade, Maryland).

The Book Fair is BARTable! The event’s venue in downtown Oakland is an added convenience for bibliophiles. The Oakland Marriott City Center is just steps away from the 12th Street BART Station, making it easily accessible to attendees from San Francisco and all over the East Bay. Out-of-town visitors will appreciate staying onsite at the Marriott, plus fair visitors arriving at both Oakland and San Francisco airports can take BART directly to the new venue.

Sponsors for the Book Fair include KQED, ABC7, The San Francisco Chronicle and BART.