The Shakespeare Society of America struggles to preserve its historic collection 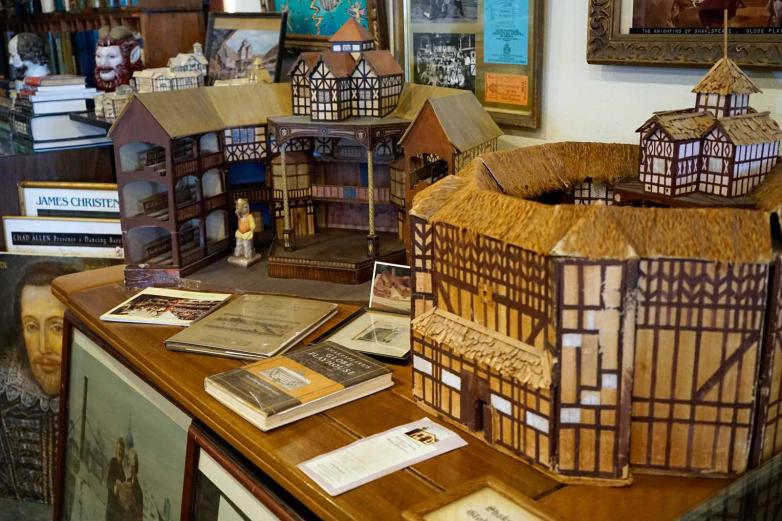 A replica of London’s Globe Theatre and a handful of related ephemera on display at the Shakespeare Society of America in California.

William Shakespeare made some rounds in his time, and many, many more rounds after his time. The humorist in him would have appreciated that the Shakespeare Society of America (SSA), which began in a Tudor mansion off the Sunset Strip in West Hollywood more than fifty years ago—and which included a one half–scale replica of the 1599 Globe Theatre interior—is now housed in a small building in the tiny, central-coast harbor town of Moss Landing, California.

And that building’s content comprises an eclectic and expansive trove of Shakespeareana: costumes, masks, busts, playbills, figurines, posters, props, furnishings, and an assemblage of odd and whimsical artifacts. Among those worthies are many seventeenth- and eighteenth-century volumes of the Bard’s collected plays, some enhanced by crisp prints from copperplate engravings that might hold the key to another fifty years of the SSA’s thriving.

But before we continue, the prologue: The SSA was founded by theater producer/director Robert Thaddeus (Thad) Taylor in 1968. Between 1976 and 1979, the SSA staged the full Shakespeare canon, thirty-eight plays in all, in succession, and then repeated that feat between 1981 and 1984. Over time, they amassed its 3,000-strong rare book and reference collection, its 10,000-item theater arts archive, and a weighty assortment of museum documents, memorabilia, and miscellany. 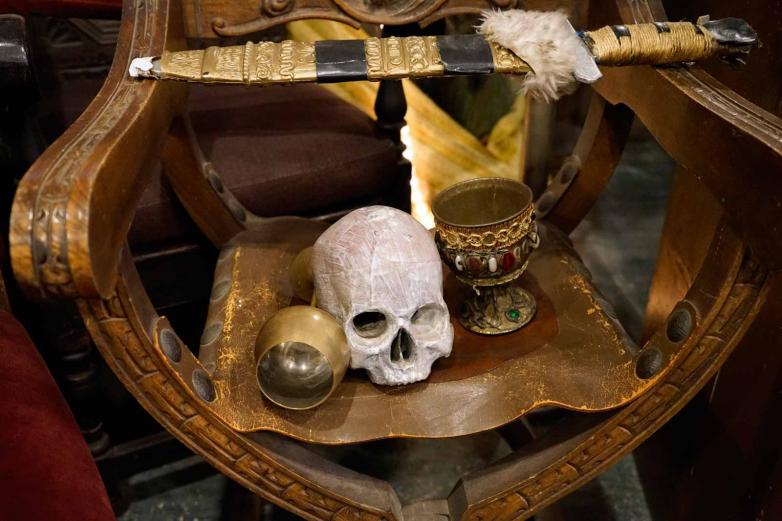 Theater memorabilia in the SSA’s collection, including Yorick’s skull.

When Thad Taylor died in 2006, the nonprofit was forced to relocate to smaller quarters but tried to stay true to his original goals. “The mission of the Shakespeare Society of America has always been about bringing the brilliance of the material out to the public, so they can actually see what was in original books, the original material from back then, and how important Shakespeare has been in that whole process,” said Terry Taylor, Thad’s nephew and current president of the SSA. “We have over a thousand books from earlier than 1900, and four hundred earlier than 1800. For various reasons, no one has seen every item in the collection. It’s beyond control on one level, but we’re preserving it for the future.”

One could understand the difficulties trying to control vast resources in a small space, especially when the resources keep expanding. A recent donation from the estate of a high school English teacher from Pennsylvania filled a tabletop during a recent visit. Shakespeare-themed plates, books, buttons, keychains, and a hoard of pewter finger puppets from the plays—in all, thirty boxes of items, many still in those boxes.

Taylor displayed a set of Shakespeare’s complete works from 1805 that was owned by the first John Barrymore, given to the SSA by John Barrymore II when his son, John Barrymore III, was playing Hamlet in nearby Carmel-by-the-Sea. Close at hand is a three-volume set of The National Shakespeare, a faithful reproduction of the first folio of 1623, produced with the Royal Society of Art in 1888–1889.

But it’s the giant Collection of Prints, from pictures painted for the purpose of Illustrating the Dramatic Works of Shakespeare published by John Boydell in 1803, that really catches the eye. Boydell, an engraver himself, engaged a host of other master artists and engravers to paint lavishly detailed scenes from the plays, which he displayed in a gallery. He had the engravers cast the scenes on copper plates, and then used a reverse printing process to emblazon the scenes on folio-sized paper. The ninety images are magnificent—a moonlight-on-water scene from The Merchant of Venice is mesmerizing, and Caliban has never been more vividly fiendish than in Boydell’s print illustrating The Tempest. 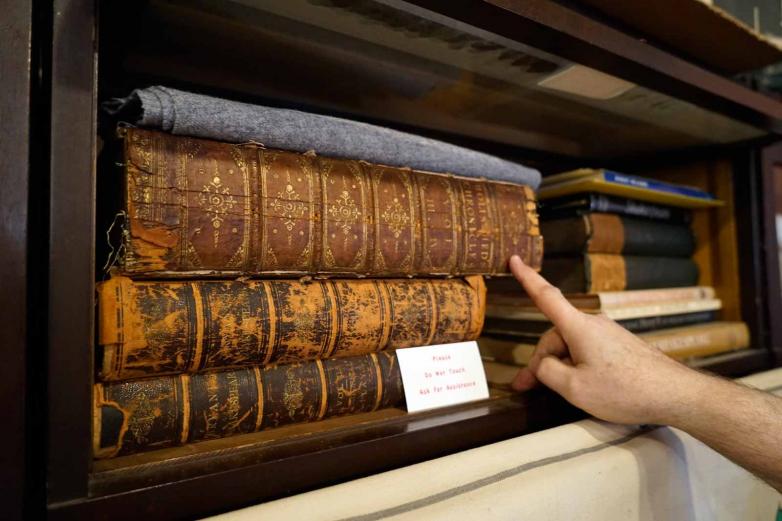 Editions of Holinshed’s Chronicles and The Bryant Shakespeare on the SSA’s shelves.

Because copyright on these items has expired, Taylor intends to have a selection of the images printed on fine paper to sell online and at the SSA. “We have about thirty in high-definition film at the printer,” he said. “I can call and have these produced in just about any size, shape, or color. But I just can’t afford it.”

The organization also has a license to reproduce and sell artful notecards and playing cards depicting all 181 flowers and other flora mentioned in Shakespeare’s works, and he plans to branch out into SSA-branded merchandise.

At this point, Taylor can’t meet the expense to properly catalogue the holdings of the SSA, much less optimally exhibit them. He’s only had intermittent part-time help since the Moss Landing enterprise opened, and many promises of help and financing have fallen through. He’s done a great deal of outreach to local schools and other institutions and suggested educational programs related to his archives, but in a time of restricted budgets and insurance concerns, it’s a rare thing for a school district to fund field trips, he said. He is hopeful that a revamped website will bring more attention.

Taylor browsed the collection, pointing to and selecting at random volumes from his shelves, including a 1938 edition of Shakespeare: Twenty-three Plays and the Sonnets, published by the United States Armed Forces Institute, and the 1999 book, Shakespeare on Management, possibly advising on how to manage manic dreams on a midsummer’s night. “Here’s Dining with William Shakespeare,” Taylor announced, and then picked up a copy of Hamlet in German, another donation.

“And my all-time favorite, The Medical Mind of Shakespeare,” he said. “Wow. So he wrote thirty-eight plays with a quill, giving people medical conditions, describing them with descriptions that a doctor uses now to describe your condition when you go in to get checked out.”

Shakespeare gave us nothing if not infinite variety, and that gift lives on, in a thousand guises, in Moss Landing, California.