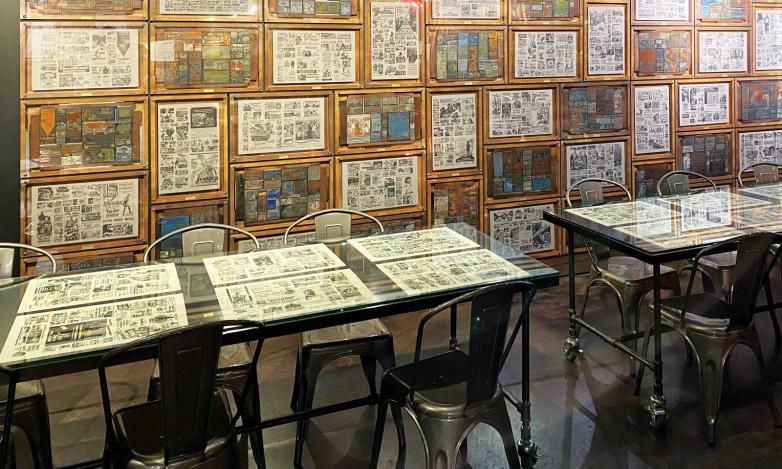 The Press Room at Manhattan’s new Alamo Drafthouse Cinemas houses a collection of original printing plates that can be pulled off the wall and used to print vintage film ads and posters.

Recently, the Alamo arrived in Manhattan, bringing its trademark creativity—and a major collection of printing plates. Located at 28 Liberty Street, the Press Room at the Alamo Drafthouse Lower Manhattan is a museum, letterpress print shop, and bar housing a “one-of-a-kind collection of over 60,000 original printing plates … spanning the 1930s to the 1980s.” These plates were once used by newspapers to print weekly advertisements for first-run feature films. 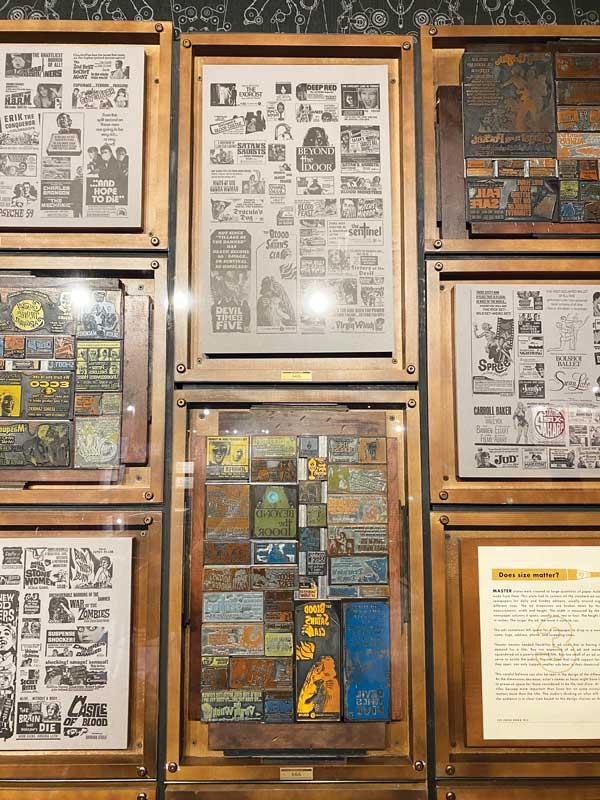 Thousands of movie-related printing plates adorn the walls at the Press Room.

The original idea for the Press Room came to Tim League, cofounder and executive chairman of the Drafthouse, while watching a documentary. “I watched Adam Roffman’s short film The Collection at South by Southwest 2017, and my mind was blown. Within the hour after having seen the film, I made contact with Roffman, who put me in touch with DJ and Marilyn [the owners of the printing plate collection]. I made an offer for the collection and pitched them on what the Press Room now is, a museum of printing, a functioning print shop, and a bar all rolled into one.”

At the Press Room, the printing plate collection is used by Brooklyn master printer Jes Hughes, who operates a Vandercook SP-15 proof press in the center of the lobby, surrounded by typecases and other tools of the trade. Hughes described the organization of the collection of printing plates at the Press Room, which is housed on the walls of the lobby and bar: “The collection has been arranged into 12" x 18" forms and put on the walls in a random assortment. There are prints pulled from those lock-ups next to each one, so guests can see the translation. These prints are for sale for $25, and when the inventory gets low, I pull the whole lock-up off the wall, put it on the printing press, and print more copies.”

Since 2018, Hughes has worked as the sole printer at Brooklyn’s Sesame Letterpress. Of her initial talks with League and the Drafthouse about the Press Room, she said, “I could see what they had in mind, and I felt they were very sincere in wanting to execute a unique and authentic experience. I got the same sense when I met Tim League as well. He has a genuine passion for letterpress and its history, and it felt like a special opportunity to bring letterpress to a new audience, especially because Alamo Drafthouse already has such a strong fan following. I felt they were honoring the craft and the collection, and that isn’t always the case when a large company wants to be linked with letterpress.” 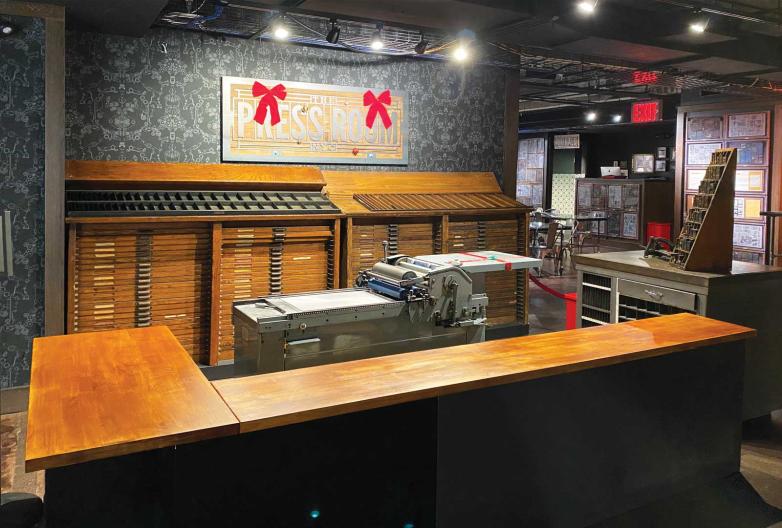 The ’scene’ at the Press Room, located at 28 Liberty Street, includes a working Vandercook SP-15 press.

Hughes works each Friday and Saturday evening at the Press Room, demonstrating the printing art and striking posters for patrons and also for various special events. For example, during the opening weekend of the Manhattan location in November 2021, Hughes, League, and the Reitmans (Ivan and Jason) printed posters as keepsakes for a special screening of Ghostbusters. Other products produced by the Press Room have so far included coasters, wrapping paper, and vinyl album sleeves, such as the one printed for Mondo’s soundtrack of the Tom Hanks movie, News of the World.

The Press Room appeals to both letterpress enthusiasts and film buffs and intends to play a role in introducing old-school printing to new audiences. “We have casters for the press and love taking it out on the road,” League said. “It’s especially fun to have little kids set the paper and turn the crank to print. We’ll be doing a lot more outreach.”

Speaking of which, for those in town for the New York Antiquarian Book Fair in April, the Press Room is planning an event tailored to bibliophiles. Stay tuned.