A rare manuscript page from Sherlock Holmes, plus letters from Albert Einstein, George Washington, the royal family, and more at an upcoming sale in California. 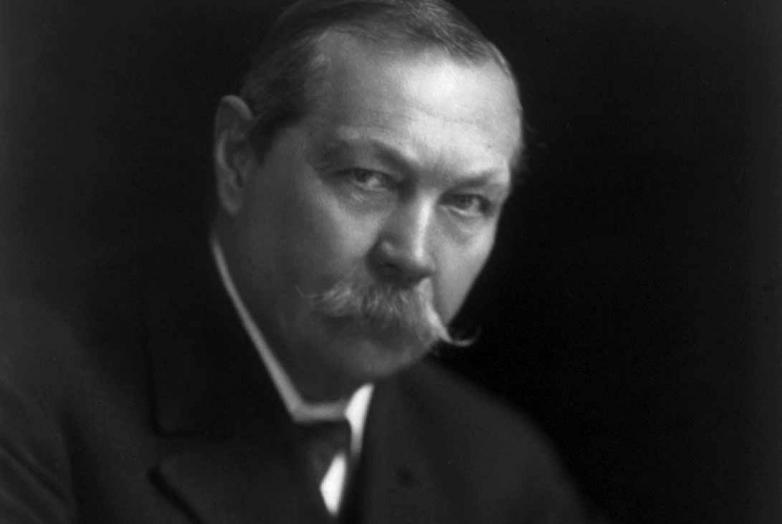 Sponsored by Profiles in History.

In 1901, Sir Arthur Conan Doyle wrote a prequel to his Sherlock Holmes series, marking the return of the famed character nearly eight years after the detective’s apparent demise in Doyle’s 1893 story “The Final Problem.” The Hound of the Baskervilles became one of the most popular books in the series, and in subsequent stories, the author eventually revealed that Holmes had in fact faked his death and was still very much alive and well. 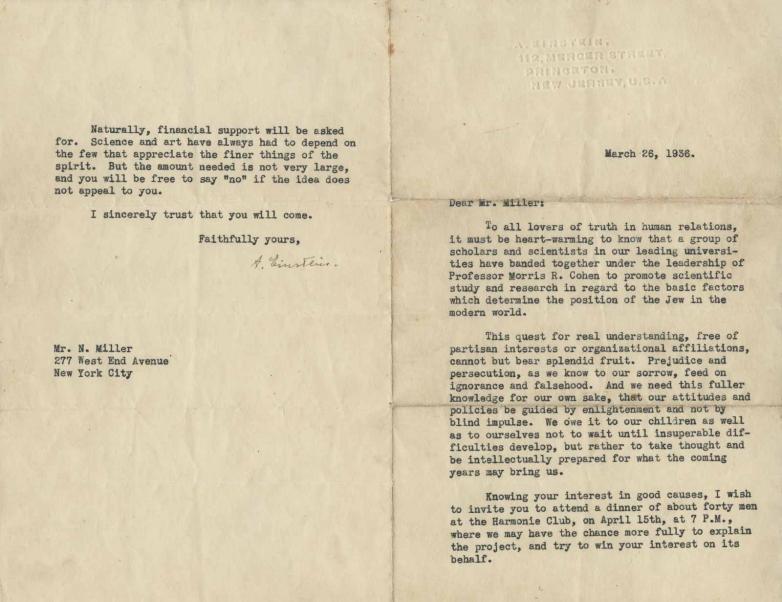 A 2-page letter written by Albert Einstein shortly after the enactment of the Nuremberg Laws in Germany, 1936.

To promote the Baskersvilles book, the American publishing house McClure, Phillips, and Co. asked Doyle for the original manuscript, and they developed a publicity campaign in which individual book dealers each received one of the pages written in Doyle’s hand. Few of those pages survive today, however one will be available for sale at an upcoming Calabasas, California auction from Profiles in History.

“This particular manuscript page is highly desirable among the surviving pages,” said director of acquisitions Brian Chanes. “It is in very clean condition and is the beginning of a chapter called ‘Fixing the Nets.’ The scene depicts one of the quintessential dialogues of the series, in which Holmes converses with Watson about a mysterious murder on the moor.” 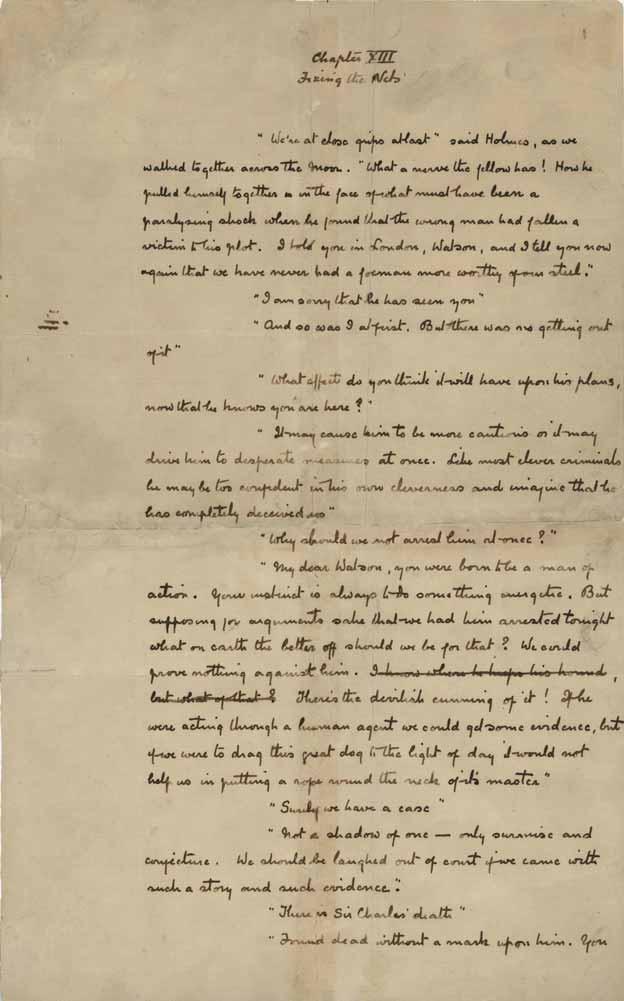 A page from the original manuscript of The Hound of the Baskervilles, handwritten by the author Sir Arthur Conan Doyle, 1902.

Housed in a custom quarter Morocco clamshell case, this piece is estimated to sell at $120,000 to $150,000. Profiles in History, which specializes in historical works on paper—including autographs, letters, manuscripts, documents, and signed photographs—will also feature a large variety of other significant works from literature, history, and the entertainment industry at its Historical and Pop Culture Auction, to be held July 11.

There will be more than 200 total lots, including a significant two-page letter written by Albert Einstein and dated March 26, 1936—as well as a large, matted color photograph of Elvis Presley inscribed in Presley’s handwriting to Ed Sullivan, and a number of Christmas cards sent from Prince Charles and Princess Diana to a Mrs. Pearce.

“The Einstein letter was written six months after Germany passed the Nuremberg Laws,” Chanes said. “Addressed to Mr. Miller, who had invited Einstein to an academic meeting of the minds to pontificate on what should be done, the renowned physicist discusses the importance of studying Jews in the modern world.” 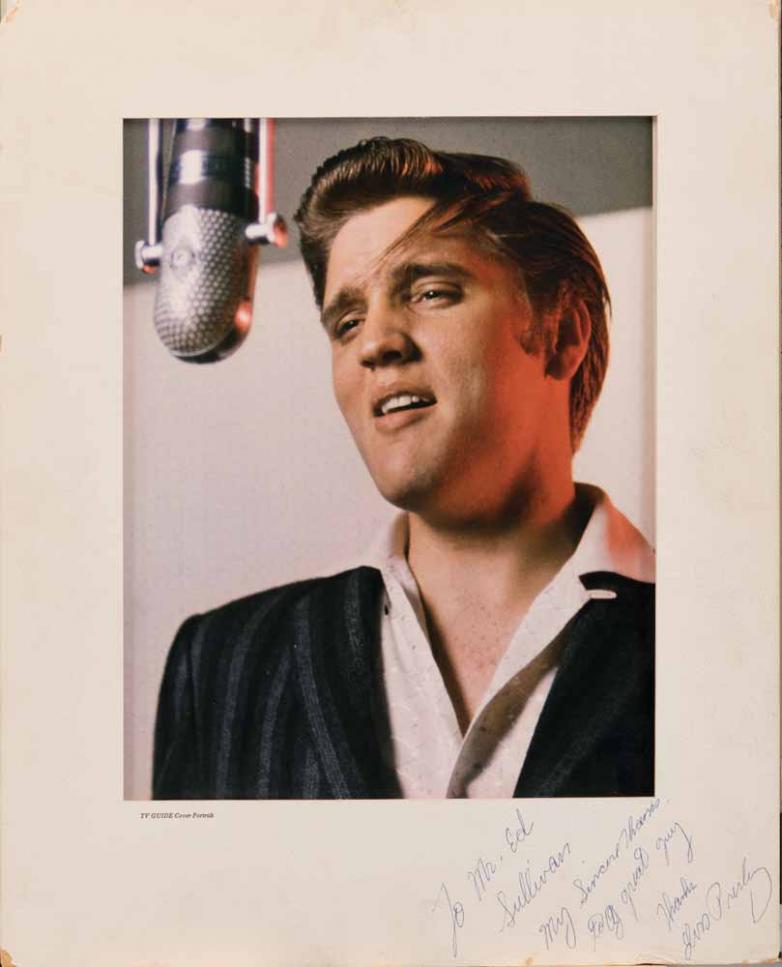 The letter reads: This quest for real understanding, free of partisan interests or organizational affiliations, cannot but bear splendid fruit. Prejudice and persecution, as we know to our sorrow, feed on ignorance and falsehood. And we need this fuller knowledge for our own sake, that our attitudes and policies be guided by enlightenment and not by blind impulse.

“This obviously foreshadows the atrocities that went on afterwards in Germany,” Chanes said.

Within a year of the date on Einstein’s letter, the Nurember laws had become the legal justification for systematic removal of Jews from public life in Germany. Einstein, who emigrated to the U.S. three years earlier, did not return. The letter is expected to sell between $15,000 and $20,000.

Click here to learn more about Profiles in History and to see additional upcoming sales. For more information about the Autographs and Pop Culture auction July 11, you may call (310) 859-7701 or visit profilesinhistory.com.