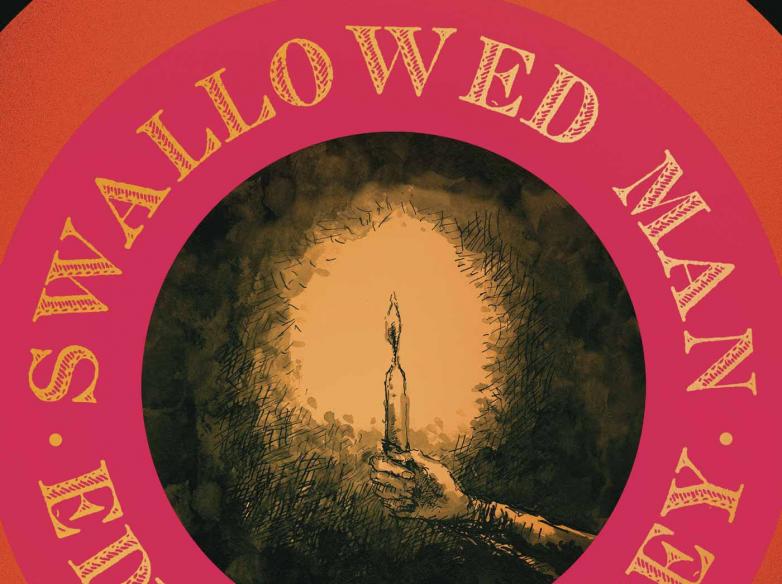 There really was never any doubt that Edward Carey, author of the new novel The Swallowed Man, was bound to become an illustrator.

“As a kid, I just endlessly drew,” recalled the novelist in a phone conversation from his home in Austin, Texas. “It’s all I wanted to do. I would start to draw characters and wonder what their stories would be, without actually writing them down.”

Carey, who was born and raised in England, has made his career combining writing and art. He made his literary debut in 2000 with Observatory Mansions, which, like all of his books, features his own illustrations.

“I’ll never do a book without doing some form of art with it,” he said. “It wouldn’t be satisfying to me.”

His books include a series for children called the Iremonger Trilogy, which follows a London family who live in a maze of discarded objects.

“Writing a kids’ trilogy gave me the permission to write stuff with huge imagination,” Carey said. “I [had] lost myself, because I felt like I couldn’t do that in so-called adult literature, which of course is absolutely nonsense. I gave myself permission to be as weird as I wanted to be.”

Carey held the launch party for the final book in the series, Lungdon, in an appropriately weird place: Austin’s Uncommon Objects, a sprawling antiques store that features an array of found treasures, some of which Carey used for inspiration for his latest book. Others he made himself.

“It’s like Star Wars, having those awful plastic figures that I absolutely adored; they were objects from the film,” he said. “I’m always making objects for my books so that one can actually have a tactile relationship with it.” 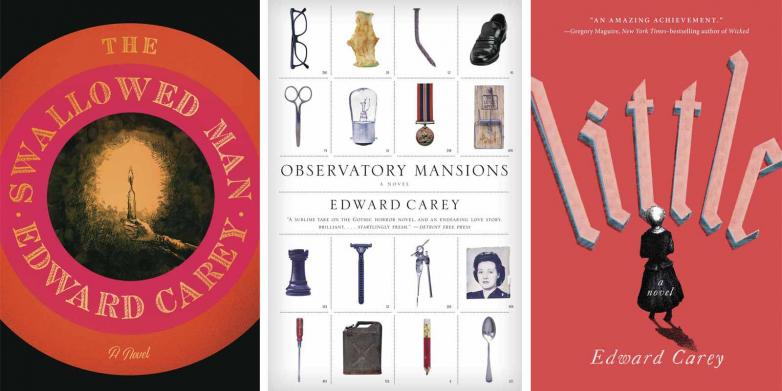 He took that even further for his latest book, The Swallowed Man. Inspired by Carlo Collodi’s The Adventures of Pinocchio, the novel follows puppeteer Geppetto during the two years he spent trapped in the belly of the Terrible Dogfish, a huge sea creature.

Carey tried to imagine how Geppetto might have occupied his time while living in the monster’s stomach. “What art would he make?” Carey recalled thinking. “He was an artist. He would have to make art for two years.”

Regular ink wouldn’t be readily available, Carey reasoned, so Geppetto would have had to improvise. And then the inspiration hit him: “Of course, squid ink! So I bought some squid ink and drew with it. And I can’t grow a beard, but I thought he would have a huge beard, and he would have to make his paint brushes out of beard hair. So I went to a hirsute friend and asked for some of his beard hair, and he was very obliging.” 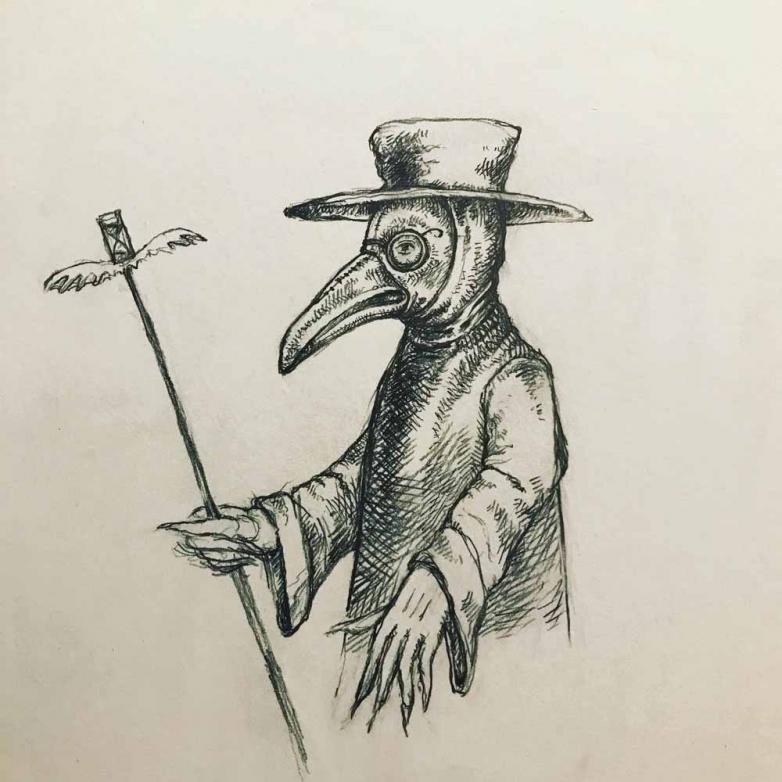 The author/illustrator’s other recent project is called A Drawing A Day, for which he has drawn a picture every day since the pandemic began in March 2020. Seen here is a plague doctor from April.

The resulting illustrations, initially commissioned by an Italian children’s hospital where Carey was writer-in-residence, formed the basis for The Swallowed Man. He was also inspired by a large bone he found at Uncommon Objects, as well as by items he found while “mudlarking” along the Thames River with his wife, the author Elizabeth McCracken, and their two children.

His kids have helped him with another project: A Drawing a Day, which he launched last March. Every day, Carey posts a new image to Instagram and Twitter, an illustration he composes with his favorite Tombow B pencils on Bristol board.

Carey conceived of the project during the early days of the Covid-19 pandemic. He’d been working on a book inspired by his time at the children’s hospital, but couldn’t stomach writing about ailing children while the coronavirus wreaked havoc across the world.

“I couldn’t do nothing, so I just said, ‘Right, that’s it!’ without even any forethought,” Carey said with a laugh. “So I’m going to do a drawing a day and post it until this is over.”

The subjects of the drawings vary widely: some are animals (a polar bear, a dormouse, a house sparrow), some are people (Tom Waits, Ada Lovelace, Joe Biden). He considered ending the project after 100 drawings, but was convinced to persist by his editor, Cal Morgan of Riverhead Books, and his friend, author Paul Lisicky. 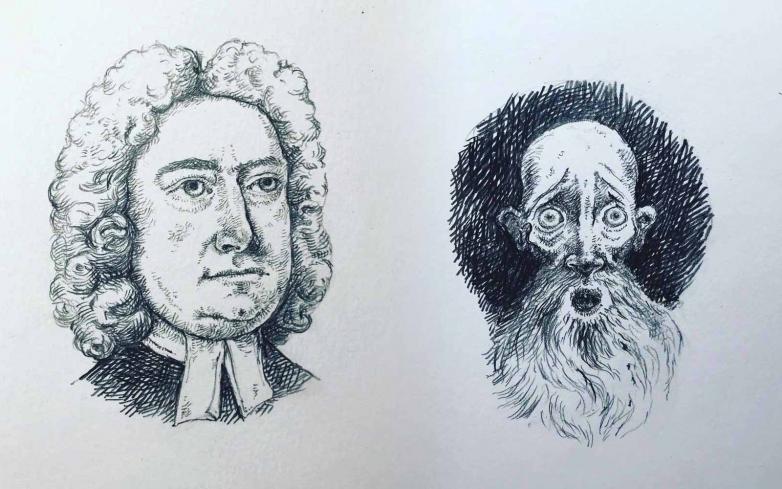 Carey’s drawing for day 257 was Jonathan Swift in honor of the author’s birthday (left) and his version of Geppetto from November (right).

“I have to say, it’s saved my sanity sometimes,” Carey said. “It’s been a way of marking time. I guess this is my pandemic diary.”

Carey has received suggestions from his kids for the project: his son requested one of the Yule Lads from Icelandic mythology, while his daughter asked for both a warthog and Guy Fawkes.

“I had to draw what was happening at the time, because nothing else would make sense, and it would be awful not to acknowledge it,” he said. “I can’t sit here and draw a chickadee, for crying out loud.”

Carey’s British publisher, Gallic Books, took notice of the project. They’ll be printing the drawings in a collection later this year, and an exhibition of the drawings will accompany its publication. “We’re going to put, ideally, all the drawings in one room,” Carey said. “Oh my God, if we can.”

In the meantime, the drawings remain at home with Carey. “I sort of stretch them out on the floor, every fifty pages,” he said. Then, noting that the pandemic is far from over, he added: “We’ll need a bigger house.”