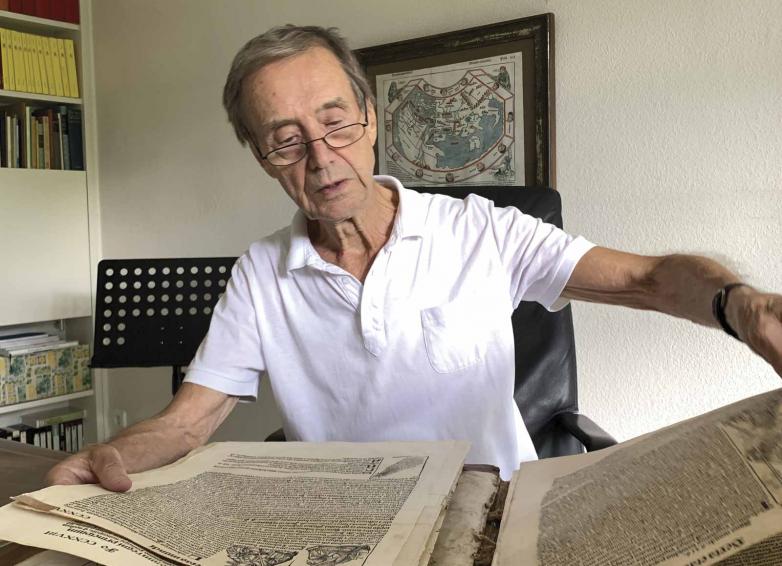 Wolf von Lojewski with the Nuremberg Chronicle he collected piecemeal.

Wolf von Lojewski spontaneously bought five leaves from the Nuremberg Chronicle at an antiquarian bookshop in London nearly forty years ago. The story could have ended there, but ten years later a chance find of further leaves at a book fair in Virginia prompted him to wonder whether it would be possible to assemble the Chronicle leaf by leaf—a question that kindled a passion that lasted for three decades. In his new book, Verstreute Blätter/Scattered Leaves, von Lojewski takes the reader on a bibliophilic journey, from fifteenth-century Germany into the world of the Chronicle, and from his first discovery of a Chronicle leaf to the recent arrival of the last from Escondido, Texas.

Compiled by the Nuremberg doctor Hartmann Schedel and first printed in Nuremberg by Anton Koberger in 1492–1493, the Liber chronicarum (as it is titled in Latin) provides a history of the Christian world from its beginning to the late fifteenth century. Its 326 folio leaves bear some 1,800 woodcuts, and while this lavish illustration ensured the survival of a large number of copies of the work in the following centuries, the individual leaves, particularly those with views of famous cities, also found an enthusiastic audience, leading to the further subdivision of fragmentary copies. It is a difficult chapter in the history of the book trade, as von Lojewski acknowledged. 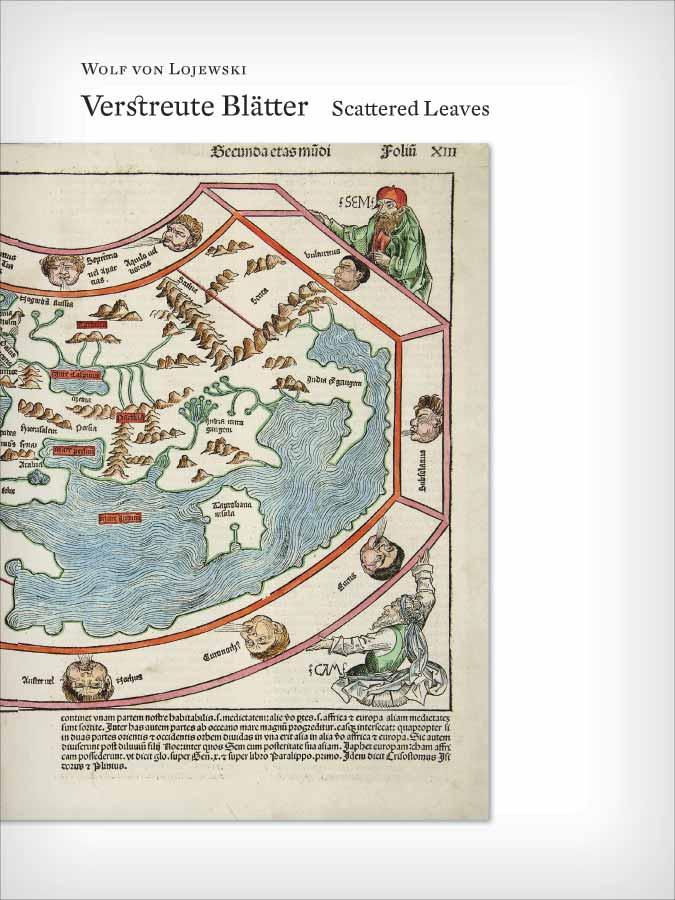 A renowned journalist and author, von Lojewski was the face of political and world news for a generation of Germans. He said he caught the “rare book bug” in 1977 in Washington D.C., where he was covering the presidential election. He had entered a bookshop to search for current political literature and emerged from it with a work on the Holy Land published in London in 1623. “I acquired it like a work of art, a message from a distant past, in order to immerse myself in it at leisure and learn what concerned our fellow humans 300 years ago,” he explained. In his even more intensive and protracted engagement with the Chronicle, he recognized, across the divide of half a millennium, the concerns, hopes, and fears of a world in flux.

Von Lojewski said that Germans generally consider his search for the 326 leaves “crazy,” and Detlef Thursch, the organizer of the Frankfurt Antiquarian Book Fair who encouraged von Lojewski to write about his collection, confirmed that, in his experience, leaf-by-leaf collecting is uncommon in Germany. Whether you consider his quest eccentric or ingenious, through his collection von Lojewski gained new insights into early printing. He writes about these engagingly in Verstreute Blätter/Scattered Leaves. Readers knowledgeable in German will derive much pleasure from the author’s elegant style (while the English translation tends to be literal at the expense of idiom), and the volume, like the work that inspired it, is beautifully illustrated. With this publication the ‘von Lojewski Chronicle’ establishes itself as an object in its own right, which is more than the sum of its parts: an act of reunification in a world at risk of fragmentation.