Collecting Feminism One Book (or Ribbon) at a Time 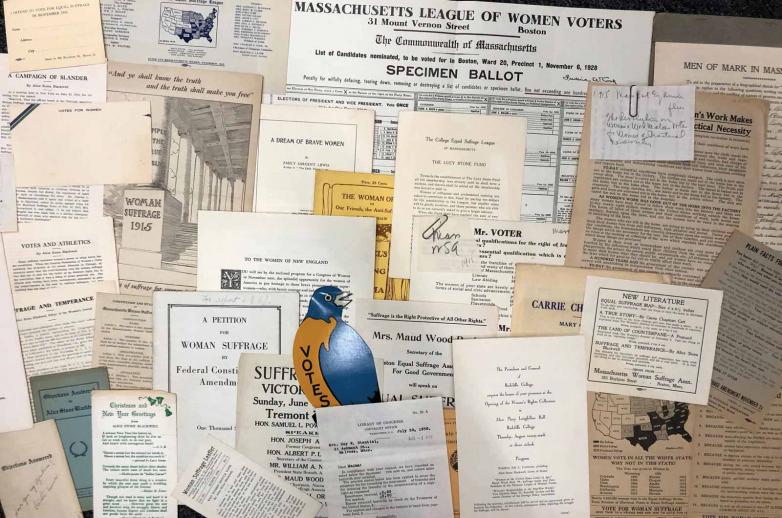 A small sampling of material related to Edna Stantial (1897–1985) from Barbara Dobkin’s collection. Stantial worked for many women’s rights organizations, including the National American Woman Suffrage Association, where she served as its archivist.

This year’s suffrage centennial puts the spotlight on women’s history, four centuries of which are preserved in the Dobkin Family Collection of Feminism. Its founder, the Manhattan-based philanthropist Barbara Dobkin, has devoted substantial time for three decades to acquiring tens of thousands of books and manuscripts related to women’s lives and works. In her office and storage rooms, binders and gilt-lettered boxes can be opened at random to reveal testimony of wrenching personal milestones and sweeping historical change.

Her holdings span from The Lawes Resolutions of Womens Rights—a 1632 treatise noting that only widowhood allowed women to be “free in libertie”—to twenty-first–century printouts of Margaret Atwood’s tweets. The writings produced or owned by celebrities and influencers, from Phillis Wheatley to Elizabeth Cady Stanton, Emma Lazarus, Amelia Earhart, Zora Neale Hurston, Carson McCullers, and Erica Jong, mingle with the published and unpublished musings of forgotten philanthropists, abolitionists, utopians, chefs, bicyclists, and hospital patients. 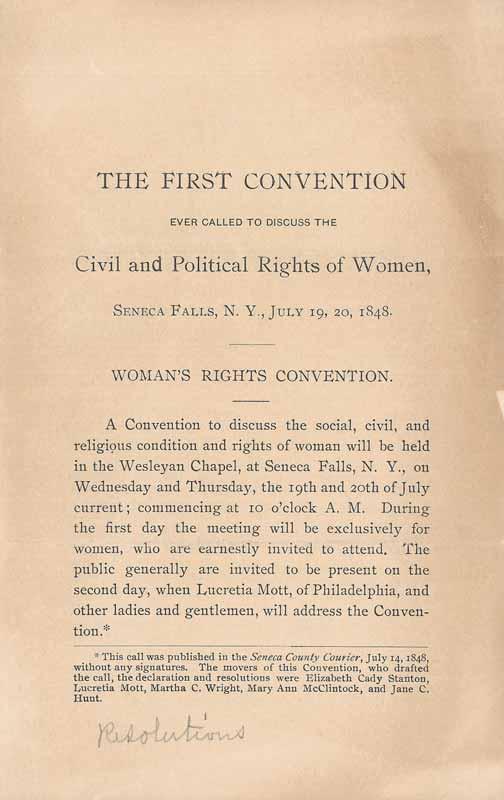 Courtesy of the Dobkin Family Collection of Feminism

A report on the proceedings of the 1848 convention for women’s rights in Seneca Falls, New York.

An 1820 edition of The Ladies’ Companion for Visiting the Poor, an unsigned sermon collection, gives suggestions for guiding “one who has led a careless Life, but who is not awakened to a Sense of her Danger.” In an 1853 letter mailed from an insane asylum in Utica, New York, an inmate named Lois Whittemore told her husband Albert about holding up despite the racket of “crying and mourning” and believing that “home and friends and kindness is all that I need to cure me.” And among the many historical texts in Dobkin’s hands that sound eerily contemporary, a 1930s memoir records an agonized mother’s support for her daughter’s determination to live as a boy, under a new name that “burned all our bridges behind us.”

“The way Dobkin has collected is bar none,” said Valerie Paley, director of the Center for Women’s History at the New-York Historical Society (N-YHS). “It gives all new meaning to the word ‘motherlode.’”

Dobkin said her voluminous evidence of women going about their daily rounds, while sometimes defying expectations, “is empowering.” She browses through the trove “when the mood hits me,” she added. She was interviewed at her apartment—her alpha bulldog Fanny snored at her feet much of the time—where the walls are hung with artworks by the likes of Faith Ringgold and Cindy Sherman. Through decades of accumulating books and manuscripts, she joked, “I kept saying, ‘I’m not a collector.’”

Her main supplier has been Glenn Horowitz (other dealers on the roster include Priscilla Juvelis and Sarah Baldwin). What Dobkin has bought, Horowitz said, “really serves almost as a corrective” to institutional holdings “neglectful of the contributions of women.” Horowitz would steadily send out faxes reminding the book world of his client’s niche. The determining factor for making purchases, he said, was whether the wares for sale could “tell a new story.”

Courtesy of the Dobkin Family Collection of Feminism

Belva Lockwood’s gold-fringed creamy campaign ribbon from 1888 will be on display in Women March, an exhibition at the New-York Historical Society through August 30, 2020.

Dobkin started “very innocently” in 1992, she recalled, by giving one of her daughters a graduation present of a signed copy of Virginia Woolf’s A Room of One’s Own. (Barbara and her husband Eric Dobkin, an investment banker, who married in 1965, have two daughters, Rachel, a librarian, and Jess, an artist.) Today, Dobkin’s shelves hold handsome, protective boxes of various heights in red, green, gray, taupe, lilac, and plum. Plush boxes have even been customized for fragile ephemera, such as a wire toy, the size of a flyswatter, with a spinning ring emblazoned “Votes for Women.”

Dobkin has often focused on works dealing with women’s suffrage, Jewish innovators, and battles for social justice, all of which relate to her longtime charitable interests. The Dobkin Family Foundation has helped found and given millions of dollars to nonprofit activist groups including the Jewish Women’s Archive, a Boston-area organization dedicated to documenting the stories of Jewish women and fostering social change. And yet Dobkin has never sought attention for her own accomplishments—her friend, author/activist Letty Cottin Pogrebin, has described her as “unassuming and almost maddeningly modest.”

The collection, meanwhile, is attracting cognoscenti. The searchable website dobkinfeminism.org notes some of the items that have been incorporated into scholarly presentations, publications, and exhibitions. The collection manager, Sarah Funke Butler, said she never tires of supplying transcripts and images of the material to a growing number of scholars. Butler added, “The power of having this all together is that they talk to each other in unexpected ways.”

Dobkin material appears in, for instance, recent volumes of collected letters by Dora Carrington, Sylvia Plath, and Willa Cather. High-profile institutions have come calling, sometimes year after year. In this year’s marking of the suffrage centennial, the N-YHS’s exhibition Women March, which runs through August 30, contains half a dozen of Dobkin’s election relics including Belva Lockwood’s gold-fringed creamy campaign ribbon from 1888. The candidate playfully rendered her name as a rebus of a handbell, a padlock, and a wooden log. The strip of fabric “feels so minor, yet it brings me so much delight,” Butler said. It humanizes a politician who maintained a sense of humor while pursuing a hopeless quest—and nevertheless, she persisted.

Dobkin stopped buying a few years ago. She has shifted her attention to finding an institutional home for the collection. “Tell interested parties they should call,” she said. Many people gasp, she added, upon seeing the laden shelves and realizing how many viewpoints she has assembled. And even after all her moments of reverently tucking some fresh discovery into its new gilt-embossed custom box, she still marvels at how many stories can only now be told through surviving papers: “It just amazes me, how much there is out there.”