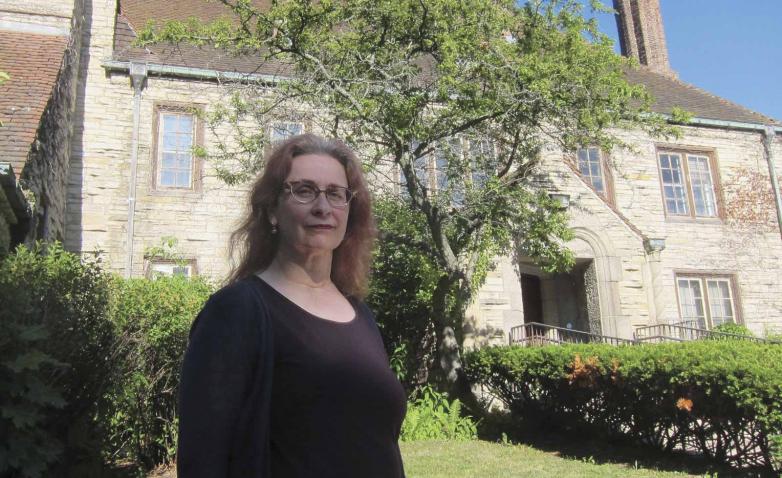 Artist and author Audrey Niffenegger pictured here in front of the Harley Clarke Mansion in Evanston, Illinois. The building will house a new book arts organization that she is spearheading.

Audrey Niffenegger was fifteen when she first entered the Harley Clarke Mansion, an English Tudor-style edifice that abuts a picturesque beach in Evanston, Illinois. At the time, in 1978, the city-owned mansion housed the Evanston Art Center, founded to increase community access to arts education. A teen with literary leanings, Niffenegger signed up for printmaking. She quickly fell in love with not only the classes but also the building, with all its quirks of an aging manor worn by a half-century of weather and sundry tenants.

“As a high school student, to me, the kind of run-down house with an art school in it was very glamorous,” she said, during a visit to the site earlier this summer. 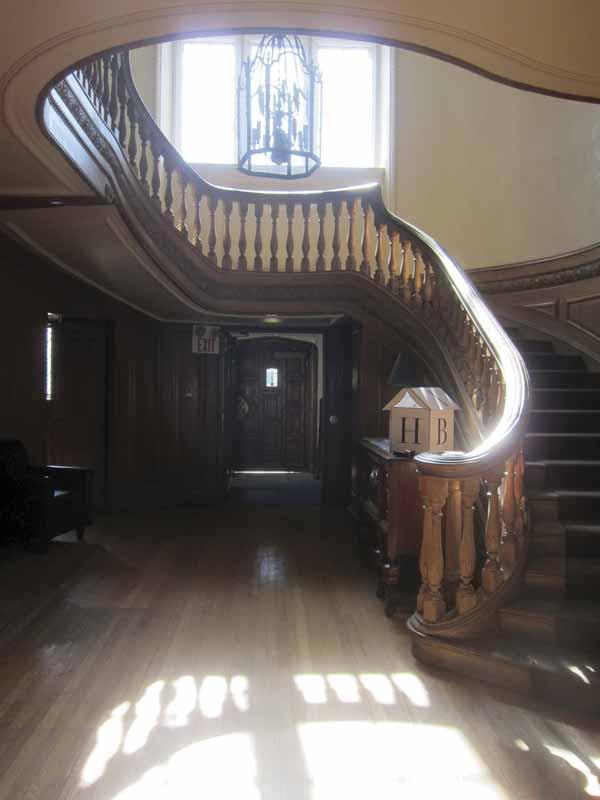 The mansion, built in 1927, retains some of its architectural charm but will require extensive restoration before Artists Book House can open its doors.

Niffenegger returned several years later, this time to teach. Now, she holds the keys to the Harley Clarke, having recently entered into a long-term lease with the city. The visual artist and writer, well known for her bestselling novel, The Time Traveler’s Wife (2003), is busy at work on something different, though no less personal: developing the Harley Clarke into a nonprofit center to teach and promote book and paper arts.

Called the Artists Book House, the arts hub will occupy the landmarked, 22,000-square-foot house, with studios, classrooms, and communal spaces spread across its four floors. The former main bedroom will host a bookbinding studio; the old living room, a bookstore; and the solarium, a cafe. Papermaking will occur in the conservatory, designed by Jens Jensen, the property’s original landscape architect, with pulp beating and cooking in the labyrinthine basement.

“We’re creating a place for people to be,” Niffenegger said. “The cafe means that you don’t have to take a class to be here. You can be in a beautiful building for the price of a cup of coffee.”

Though Niffenegger has a clear vision for the center’s programming—from a young poets club to workshops on letterpress printing and Ethiopian or Japanese bookbinding—it may be five years until Artists Book House officially opens. The Harley Clarke was built in 1927 for its namesake, a utilities tycoon, and was one of the last grand residences to be built along the lakeshore’s prime real estate before the Great Crash. But over its lifetime, the wood-framed and limestone-clad structure, designed by architect Richard Powers, has been neglected. It requires extensive repair, from its vine-covered exterior masonry to its cracked and water-damaged plaster walls, ceilings, and finishes.

With its lavish layout boasting a coach house and servants’ quarters, the Harley Clarke has historically worked well for group use rather than as a single-family residence. In 1950, the Clarkes sold the property to Sigma Chi to use as its national headquarters; the fraternity left in 1965 and sold it to the city, which leased it to the Evanston Art Center. In 2013, the Art Center relocated one mile west, and the Harley Clarke has since sat vacant. 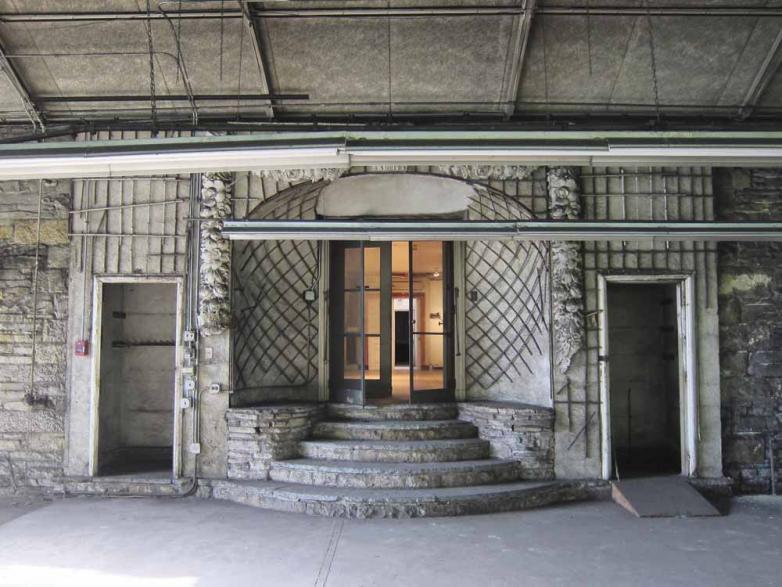 Vacant since 2013, the Harley Clarke was almost demolished before city officials issued a request for proposals by parties interested in maintaining and investing in the property.

At that time, Niffenegger was teaching at the Columbia College Chicago Center for Book and Paper Arts, which she co-founded in 1994. The center initially hosted community classes and collaborated with Chicago public schools until Columbia decided to focus its resources on the book and paper arts MFA program. Come 2018, it was “clear that the center was failing,” said Niffenegger, who left Columbia in 2015. “And then they announced it was going to close.”

“The good thing is, it lasted twenty-five years and it trained a lot of people. But it left a void.”

The Harley Clarke, too, was endangered. The city had explored possible ways to revive it but ultimately voted to raze it. Protests from local groups, however, led officials to issue a request for proposals by parties interested in maintaining and investing in the property.

For Niffenegger, it was a clear opportunity to return to her roots in community education. “I was like, all right, we’ve got this defunct center and these beautiful buildings, let’s try to put it together.” 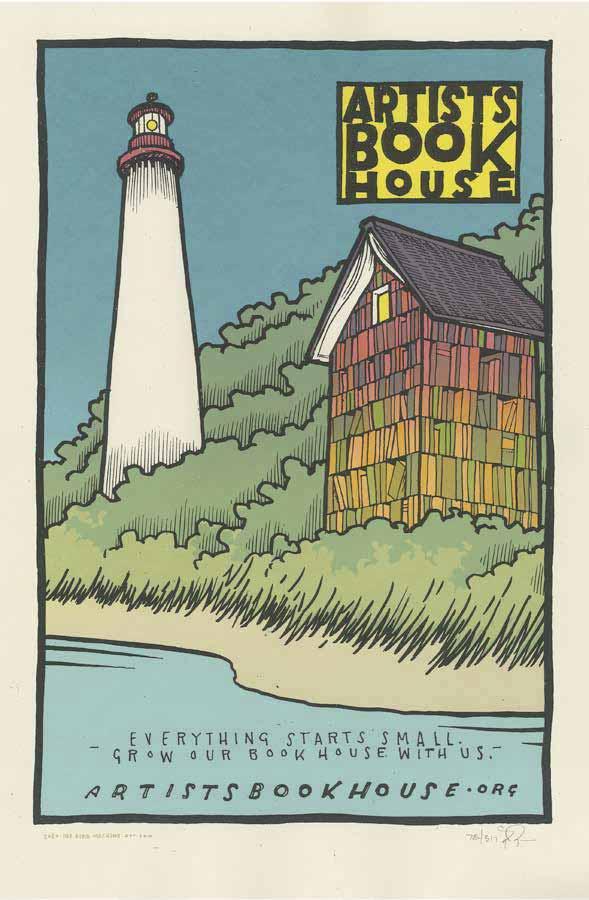 A silkscreen created for ABH by artist Jay Ryan.

In March 2021, after pandemic-related delays, city officials announced that they had selected Artists Book House’s proposal, citing the project’s likely positive impact on the neighborhood. “This is a totally new thing for us,” Evanston alderman Judy Fiske said at the time. “This is going to attract, I think, a lot of interest into Evanston.”

In May, Artists Book House received approval to enter into a forty-year lease, with $1 in monthly rent owed for the first decade. Its fourteen-member board has two years to fundraise an initial $4 million to cover renovations costs, estimated between $6.5 to $8.5 million. The center will also sublease the Harley Clarke coach house to the Jens Jensen Gardens in Evanston, which will maintain the landscape according to Jensen’s vision. Plant material will be used for papermaking, reinforcing the relationship between the house and its environs.

Ambitious, even utopian, as the project may be, Niffenegger is confident the funds will come. The center plans to sustain operations through affordable classes and workshops and to eventually offer scholarships, particularly considering the rising cost of higher education.

“I think a lot of people are rethinking the need for a degree,” Niffenegger said. “I had started to feel unethical by the time I left Columbia. The students are fantastic, but they’re going to be paying loans off forever. So to give people access to something they might not be able to pay for seems really important.”

Part of the fundraising process will be opening the Harley Clarke for tours. Niffenegger hopes this will help people visualize the entire house humming once again, this time with bookish things: a zine fest in the ballroom, a free demo in the paper studio, a gold-leaf class in the sleeping porch.

“If we’re lucky,” she said, “it’s not going to be quiet in this building.”