Houghton Library's new exhibition takes us to the moon 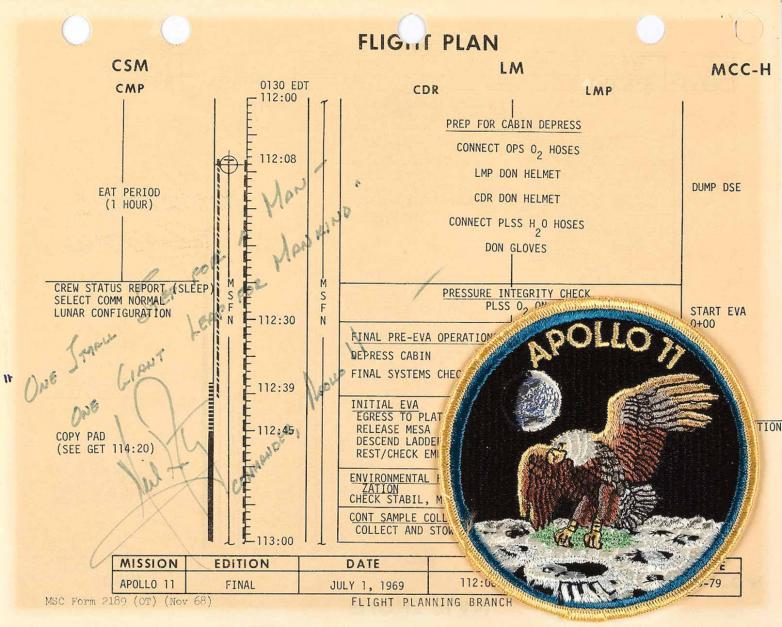 Apollo 11 crew patch and flight plan page inscribed by Neil Armstrong (perhaps for the first time) with his famous declaration, “That’s one small step for a man, one giant leap for mankind,” immediately after returning from space, while in protective quarantine, 1969. Loan, private collection.

A landmark anniversary calls for a landmark celebration. The Houghton Library at Harvard University delivers in grand fashion with Small Steps, Giant Leaps: Apollo 11 at Fifty, an exhibition that focuses on the first moon landing. The semi-chronological exhibit features sixty items: twenty-three from the library, and thirty-seven loaned by a collector of space memorabilia who wishes to remain anonymous.

The library places in context humankind’s stellar achievement by showing the centuries of scientific work and thought that preceded it. For Small Steps, Giant Leaps, the Houghton summoned three heavy-hitting first editions from its collection: De revolutionibus orbium coelestium [On the Revolutions of the Heavenly Spheres], released by Copernicus in 1543; Galileo’s 1610 tome, Sidereus Nuncius [Starry Messenger]; and Newton’s 1687 work, Philosophiæ Naturalis Principia Mathematica [Mathematical Principles of Natural Philosophy]. The Copernicus is open to the page with its sole diagram of the heliocentric model of the solar system. The Galileo is turned to the author’s sketches of the moon, and the Newton features his discussion of how the moon orbits the earth. John Overholt, curator of the Donald and Mary Hyde Collection of Dr. Samuel Johnson and early books and manuscripts at Houghton Library, said that he doesn’t believe all three rare books have appeared in the same exhibition since he arrived at the library in 2004. There’s an outside chance that the display might be a first.

“I wanted to show a particular idea over time, before the moon was visited by humans, when it was a blank slate for humans to imagine a different world, or a way to comment satirically about the way things are on Earth,” said Overholt. To that end, a display case devoted to the moon in the imagination features Jules Verne’s De La Terre a La Lune (1865), Robert Heinlein’s The Man Who Sold the Moon (1950), and an issue of the seminal science fiction magazine Amazing Stories from 1929. 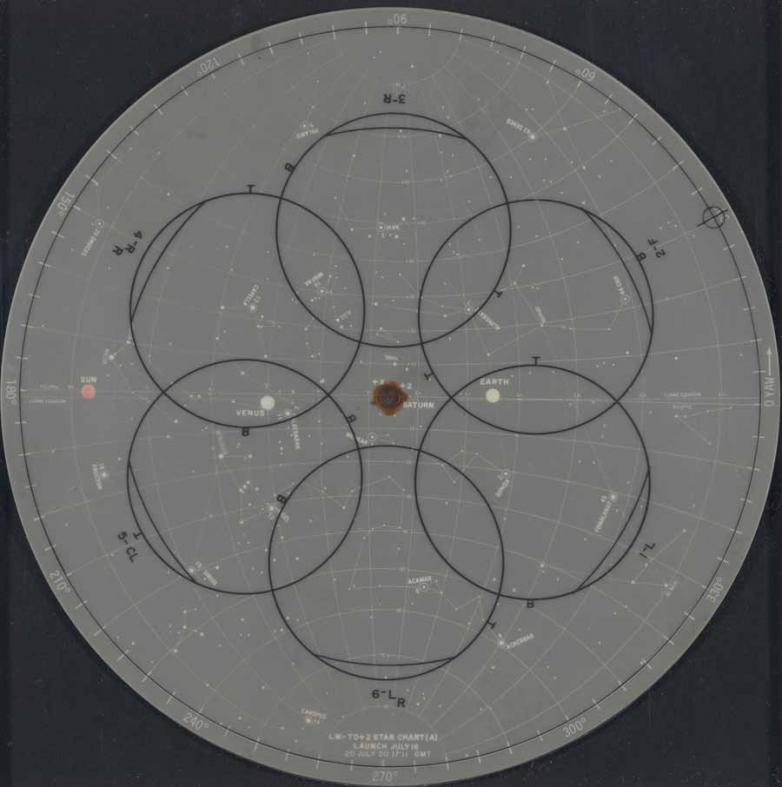 Neil Armstrong and Buzz Aldrin used this star chart on the lunar surface. Aldrin inscribed its underside in blue ink, above the square of Velcro that contains traces of moon dust.

Other sections of the exhibit include period coverage of the Wright brothers’ experiments with flight, a key discovery on the path to the Saturn V rocket and a successful lunar mission sixty-six years later. “The materials really demonstrate how much it took to put people on the moon, and how much time and scientific labor was required to make that possible,” Overholt said.

The flight plans and celestial navigation cards on exhibit illustrate the materiality of spaceflight and navigation, and one star chart even contains traces of moon dust. As Neil Armstrong and Buzz Aldrin walked on the moon and consulted the chart, a small square of Velcro passively gathered lunar dust; Aldrin later inscribed the chart’s underside in blue ink.

Overholt said he and the library staff followed the collector’s lead in choosing what loaned objects to display. “He’s extremely knowledgeable about the history of spaceflight, and of Apollo in particular,” he said, adding, “What I like about [the exhibition] is how many things were not just crucial to the mission, but were used in the mission—things that were in the capsule with them, things that they carried on the surface of the moon. I think people will be excited to see artifacts like that up close and in person.”

Small Steps, Giant Leaps will be on view until August 3. Just ten days later is the fiftieth anniversary of the day the Apollo 11 crew received the Presidential Medal of Freedom at a state dinner in Los Angeles. A menu from the dinner completes the exhibit.