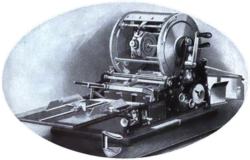 Falls Church, VA - On April 4, the Waverly Rare Books division of Quinn’s Auction Galleries will present a 262-lot catalog auction of rare and important books, prints and maps on the subject of travel, exploration and the natural world.

Titled “Exploring the Globe - Prints, Maps & Books,” the auction features the personal library of William E. Davies (1917-1990), a former U.S. Geological Survey geologist, polar explorer and recipient of the Antarctic Medal from the U.S. Congress. His collection of books from the Heroic Age of Arctic Exploration includes John Ross’ A Voyage of Discovery (1819).

The travel and exploration portion of the catalog will include works from the Middle East, the archive of author Jane Geniesse (with 70+ letters by British explorer Freya Stark), maps of early America, circa-1856 watercolors of Pacific species of fish, and the compass used during the Kantuta Raft expeditions. The auction will conclude with a group of rare natural history prints.

A strong candidate for the auction’s top lot is an Edition de Lux copy of Arctic Days, published by Andrew Melrose (London, 1913), written and signed by Sir Ernest Shackleton. Estimated at $3,000-$5,000, this book is an account of the Nimrod Expedition (1907-09). It includes sketches of polar life by two of Shackleton’s men, James Murray and George Marston, who also signed the book.

John Ross’s A Voyage of Discovery is a first-edition copy from 1819 and carries an estimate of $800-$1,200. Published by John Murray in London, the volume is quarter leather with marble boards. It is Ross’s first-hand account of how he led an expedition to find the Northwest Passage, only to turn around before what is now called the “Parry Passage” (named after W.E. Parry, the captain of the Alexander).

The archive of material from author Jane Geniesse, comprising 10 boxes, four tubs and a folder, relates mostly to her two books The American Priestess (2008) and Passionate Nomad: The Life of Freya Stark (1999), but also includes more than 70 signed letters, postcards and other items from Freya Stark to friends, including Lucy Beach, Sir Sydney Cockerell and others. The lot estimate is $1,000-$1,500.

A second-edition folio copy of Diaz Del Castillo’s Conquista de la Nueva-Espana, the most important recounting of the expeditions of Spanish explorer Hernan Cortez and the conquest of Mexico, published in Madrid in 1632, is estimated to reach $3,000-$4,000. Diaz participated in 120 battles during Cortez’s campaign through Central America and conquest of Mexico (1519-1521).

A double-page, hand-colored, engraved map of the Mid-Atlantic coast - to include Virginia, Carolina, Maryland and New Jersey - beautifully rendered by German cartographer Johann Baptiste Homann (1644-1724), should reach $1,000-$1,500. The map, housed in a 26½-inch by 30¼-inch frame, was published in Nuremberg circa 1720. It is both important and decorative.

A rare Viceroy Edition copy of Captain F. Brinkley’s The Oriental Series: Japan and China, published by J.B. Millet (Boston, 1901-1902), #26 of 50, is expected to make $800-$1,200. The 12-volume set is green-gilt-decorated morocco leather and includes silk doublures and endpapers, watercolor-on-silk frontispieces, and illustrations throughout (some colored and on silk or vellum).

A first U.S. edition (in English, translated from the original Norwegian) two-volume set of Roald Amundsen’s The South Pole, an account of his famous dash to the South Pole, arriving on Dec. 14, 1911, five weeks before Robert Falcon Scott’s British Expedition, has an estimate of $500-$700. A pencil inscription reads, “Compliments of Lee Keedick for R. Amundsen, July 1913.”

The actual compass used by explorer Eduard Ingris for the two Kantuta Expeditions, which followed in the footsteps of the legendary Kon-Tiki expedition led by Thor Heyerdahl, should easily change hands for $400-$600. Housed in a wooden case, the compass is believed to have been given to Ingris directly by Heyerdahl. Also included in the lot is Kon-Tiki and Kantuta-related material.

A group of four botanical plates from 1827 by Pierre Joseph Redoute (French, 1759-1840), each one an engraving of a flower, from Choix des Plus Belles Fleurs et des Plus Beaux Fruits, with engraving by Langlois (Paris), should hit $400-$600. The stipple engravings with original hand-coloring include plates for Mauve hibiscus trionum, Clematis Viticella, plus two other flowers.

Auction start time is 6 p.m. ET. All forms of bidding will be available, including absentee and live via the Internet through LiveAuctioneers. Preview at the gallery on Saturday, March 30 from 10-12, then Mon.-Thurs., April 1-4 inclusive from 10-6. For additional information about any item in the sale, call 703-532-5632, extension 575; or e-mail waverly@quinnsauction.com. View the online catalog and register to bid absentee or live online, at LiveAuctioneers.com. Visit Quinn’s and Waverly online at http://www.quinnsauction.com. Quinn’s is always accepting consignments for future auctions.