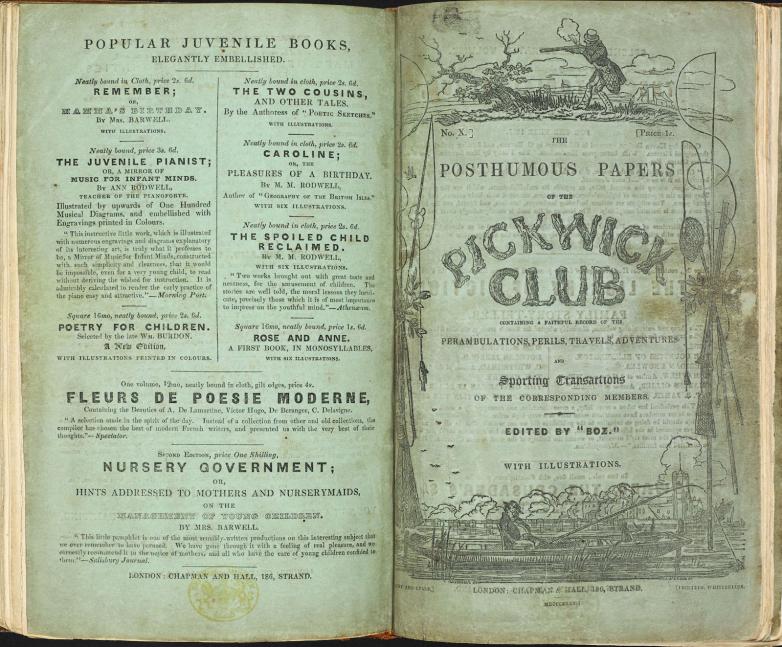 The British Library Board

The Pickwick Papers by Charles Dickens in serial format

One of the pleasures of collecting Charles Dickens' books in their original, serialized parts are the colorful ads inserted at the front and rear of each. These are ads you do not want to skip past, and they are so enchanting and quaint that you may find it difficult to go on to reading the actual text of the book.

Here, the world of 19th century consumer products opens up, the ads cascading out of a cornucopia of Victorian need. It's a strange world yet probably no stranger than the parade of sales pitches for the weird, must-have! gizmos and wacko thingamajigs that have curiously fallen to Earth from deep space and landed on 12midnight-4AM television.

Put these gotta-gets in your shopping cart - but you might want to consider wearing a bag over your head to avoid incredulous stares during check-out.

If you suffer from lordosis or kyphosis of this severity, forget about a spine supporter, invisible or otherwise, you need major surgery.


What's a peliss? Should kids be wearing them now?

Note the other fine products from Queen Victoria's "ovariotomist" and obstetrician:

With each of these fine over-the-counter nostrums loaded with morphine, they're absolutely guaranteed to make all your troubles go away; your illness, however, is another matter.


There are many more classic advertisements to be found within Dickens but, for my 19th century consumer shilling, none beats the following:

The Invisible Ventilating Heads of Hair

This, to me, sounds like an act that might have appeared on the old Ed Sullivan Show (cue Aram Khatchaturian's Sabre Dance, get the plate-spinners on-deck); a Las Vegas show along the lines of Blue Man Group; or any one of the New Vaudeville variety acts that emerged during the 1980s.

Yet it was a real product: wigs for ladies and gentlemen. But wigs are so boring. How do you market them?

What is noteworthy about the ads in Dickens' serial novels is that their very presence suggests that publishing has always been a low-margin business. At only one shilling each, the parts apparently needed the ad revenue to make them profitable. And, considering how popular Dickens was, Chapman and Hall, his publisher at the time, likely charged top rates for the ad space.

Images from David Copperfield, Parts 1 and 2 (May and June, 1849), and courtesy of David Brass Rare Books.