Is This an Unpublished Rackham Santa Claus? 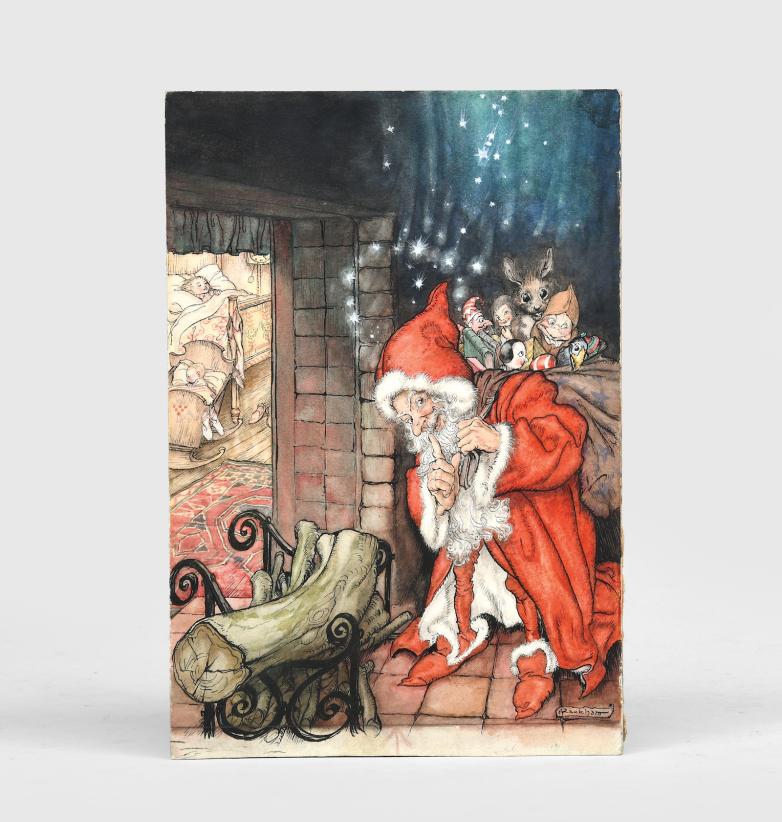 An apparently unpublished, original drawing by Arthur Rackham depicting Santa Claus from inside a chimney on Christmas Eve is included in Peter Harrington's new Christmas catalogue.

The fine ink and watercolor artwork drawing signed “Arthur Rackham” lower right, with “Santa Claus” and artist’s signature on reverse, was found in a private collection and has not have been publicly seen for more than 30 years.

According to the London-based rare bookseller, this original drawing - offered for £50,000 - is not published in any of the standard Rackham books and Rackham experts consulted about the piece are naturally intrigued. It has been suggested that the work, which appears finished as for publication, may have been a special commission or a one-off magazine illustration, perhaps meant for the American market where Rackham achieved significant popularity after he illustrated a special edition of Clement C. Moore’s The Night Before Christmas. Completely unknown work by Rackham, who died in 1939, is now very rare.

The anonymous collector whose collection it came from said: “I have been a collector of books and original illustrations for almost 60 years. My library has been mostly sold at auction, but my Lewis Carroll, Beatrix Potter, and Arthur Rackham books were sold through Peter Harrington. I have now decided for my original book illustrations to be dispersed to other collectors, including a number of pieces by Arthur Rackham, Kay Nielsen, Louis Wain, and others. This apparently unpublished drawing by Rackham of Santa Claus was acquired by me many years ago and has been one of my favourites. It has hung on the walls within my library room.”

Rackham famously provided illustrations to an edition of Clement C. Moore’s The Night Before Christmas in 1931. The present illustration is not one of the four coloured plates. “The style of this drawing is slightly different from that found in The Night Before Christmas," said Dr. Philip W. Errington, senior specialist at Peter Harrington, and a specialist in children’s literature. "Father Christmas has a longer beard here, for example. So, there’s no assumption it’s an abandoned plate.

“What is remarkable about the present drawing is it’s from within the fireplace and looking out into a room of sleeping children. It’s therefore from Father Christmas’s perspective and yet there’s a knowing look from the character. We can’t be in the chimney with Father Christmas… or can we? It’s part of the magic and, as if to stress this, note the stars and falling stardust above the character. As an artist, one of Rackham’s great abilities was to draw trees. And the fireplace in the drawing has chopped wood, thus allowing the artist to add in something of a trademark component of his compositions."