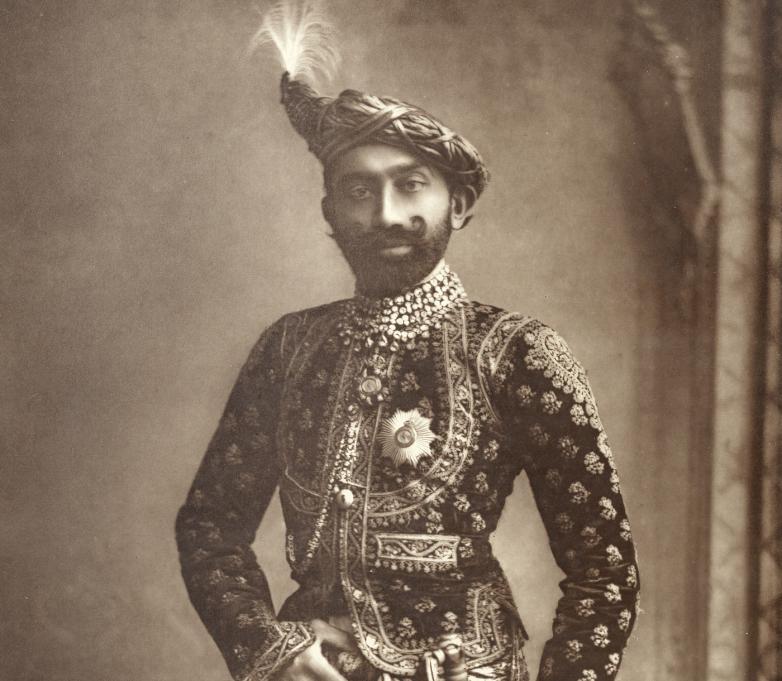 From a first edition of Sorabji Jenangir’s Representative Men of India (1889).

London – The peripatetic life of the 19th century Irish painter George Chinnery (1774-1852) took him from the Tipperary of his birth to London, then to Serampore in West Bengal via Madras, Calcutta and Dacca. Fleeing his creditors, he arrived in Macau in 1825 and made the island his home until his death in 1852. He became fascinated by the artistic possibilities of Macau’s shoreline and the local tradespeople going about their everyday lives. One of his paintings on this theme, A Tanka boat dwelling with Tanka boatwomen and pigs, Macau leads the Travel and Exploration sale in Knightsbridge on Wednesday 2 March. It is estimated at £15,000-20,000.

Rhyanon Demery, Bonhams Senior Picture Specialist, said: “A Tanka boat dwelling with Tanka boatwomen and pigs, Macau vividly depicts members of the Tanka people – a distinct and ancient ethnic group who lived along the shore of Macau. Often viewed as outcasts by the Chinese authorities Tankas lived on junks, tank being the Cantonese word for boat and ka the word for family. Today they are more usually known as Boat People and, although many have now built lives on dry land, they preserve the unique culture that so captivated George Chinnery nearly 200 years ago.”

•    Tibet and Lhasa. Photographs by J.C. White in a single volume. These rare images from Younghusband's Tibet mission of 1903-1904 on which White served as deputy were initially released individually or in albums, as half-tone or carbon prints. They were later issued in a two-volume set, dated 1907-08 and almost immediately withdrawn from circulation for fear that they would reveal classified information to the Chinese. As a result, they are very scarce as is the single volume offered in the sale which was issued a few months later. Estimate: £10,000-15,000.

•    A first edition of Sorabji Jenangir’s Representative Men of India. A Collection of Memoirs, with Portraits, of Indian Princes, Nobles, Statesmen..., and Eminent Citizens published in 1889. The book was intended as the first of a proposed series of coffee-table books of photographic portraits but, in the event, was the only one published. Of the 44 subjects depicted 32 were Indian, the remainder British. This copy comes in the original publisher’s binding and is estimated at £3,000-4,000

•    Views of Central India, an album of 53 prints by Lala Deen Dayal, dating from the 1880s. Subjects include the fort and palace of Gwalior; the Maharaja of Rewa with sirdars; the mausoleum of Chatersal at Mau and temples at Bijawar and Khajraha. Estimate: £3,000-5,000

•    Rare views of India taken in the 1850s by John Murray including The Ladies Tower in the Fort at Agra (estimate: £1,500-3,000) and Simla (estimate: £300-500). Murray was the first photographer to attempt a systematic record of Indian’s great monuments and buildings.

Elsewhere in the sale there is a wealth of interesting lots associated with polar exploration.