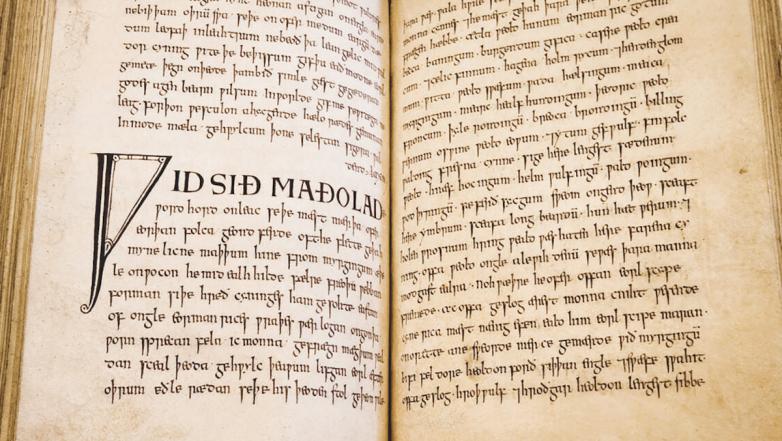 One of the oldest books of English literature in the world – possibly the oldest – is now available to read and enjoy online.

The Exeter Book is a tenth-century anthology of poetry in Old English and one of four manuscript books containing virtually all the English literature that has survived from the Anglo-Saxon period, along with the Beowulf manuscript in the British Library, the Junius manuscript in Oxford, and the Vercelli Book in Italy. It is likely that it predates the other three.

Written by a single unknown scribe around 960-980 in the southwest of England, it has been in the care of Exeter Cathedral since the eleventh century. Five years ago, it was added to the UNESCO Memory of the World Register as an example of documentary heritage of outstanding global significance.

Though incomplete and damaged in a few places (over the last millennium it has been used as a cutting board and glue stand), its 123 written leaves are generally very well preserved. The bulk of the content is made up of 95 poetic riddles and 40 poems and elegies, two of which – Juliana and Christ II (The Ascension) – are signed by one of the very few named Anglo-Saxon poets, Cynewulf. Other poems include The Ruin, The Wanderer, and The Wife’s Lament. It also features considerable contemporary Anglo-Saxon imagery marginalia, virtually invisible until revealed by digitization process.

“These drypoint images made with a pen nib or fine wooden point but no ink have become like an etching,” said professor James Clark, from the University of Exeter, who has led the research alongside digital specialists based in the university’s digital humanities lab. “They are only visible under very bright light, and high resolution imaging shows them clearly for the first time. We think these drawings would have been more visible when the book was newer, but grease and discoloration have made them harder to see.”

This digital copy also enables readers to see how the original parchment was made from different animal skins, home in on individual letterforms including runes, as well as corrections and editorial additions.

“The Exeter Book has been the jewel in the crown of Exeter Cathedral for nearly a thousand years,” said Ann Barwood, canon librarian of Exeter Cathedral. “The cathedral’s challenge has always been to keep it safe, while also finding ways to share it with the world.”