The Story Behind a Set of Beatles Signatures 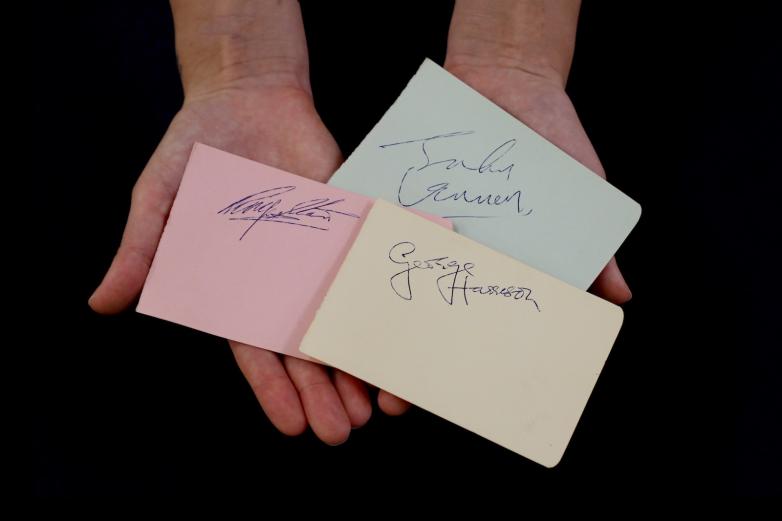 Signatures from the peak of Beatlemania

Memories of the Fab Four come to Sworders this month. The Design sale on January 17 includes autographs of all four members of The Beatles taken in January 1965 at the Hammersmith Odeon.

The vendor is the nephew of the writer and broadcaster Ludovic Kennedy and his wife the ballerina Moira Shearer – the celebrity couple who enabled backstage access to John, Paul, George and Ringo at the peak of Beatlemania.

“My aunt and uncle had met Paul McCartney at a Christmas party. When they told him they were coming to the concert with two daughters and two nephews (me and my younger brother), he invited us all backstage”. I was just 13 at the time and wore a shirt with a tab collar which was all the rage!”

The vendor remembers very little of the music “because of the screaming”. The band, playing a run of 20 near consecutive nights at the west London venue, had played 11 songs, opening with Twist and Shout and closing with a rendition of Long Tall Sally. However, he still has vivid recall of the backstage meeting.

“I shall never forget it. The dressing room was small and cramped. John was sitting on the floor deep in conversation with a man he introduced as ‘my intellectual friend – he’s a teacher’. George and Ringo sat silently smoking - the washbasin was full of cigarette butts – but Paul was the friendliest. He stood chatting to Moira and Ludovic while we passed our autograph books around.” The signatures of John Lennon, Paul McCartney, George Harrison and Ringo Starr signed across three autograph book pages are expected to bring £1,000-1,500.