Boston — This month RR Auction’s December specialty sale is a curated Apple auction that boasts a historic array of early Apple-related material that will be auctioned on December 17. 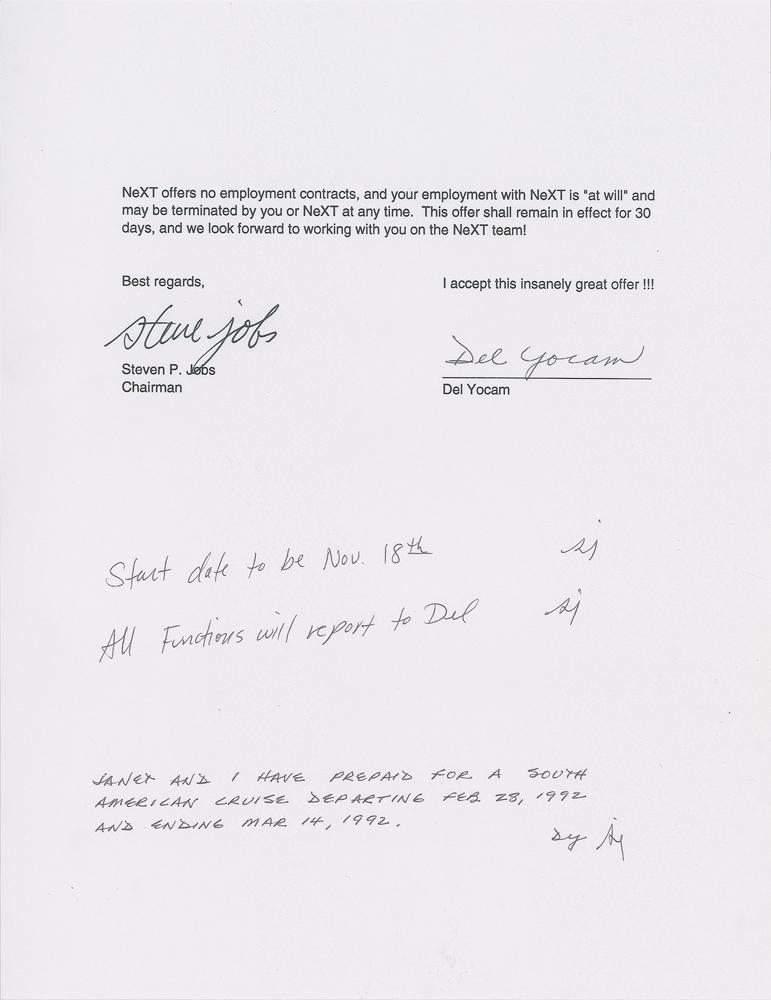 The two-page typed letter signed “steve jobs,” NeXT letterhead, November 14, 1991. Letter to Del Yocam, former COO of Apple who was then serving on the board of directors at Adobe Systems. In part: "NeXT is pleased to offer you employment on the following terms: - The title of President of Chief Operating Officer. - A salary of $250,000 per year, paid monthly in advance. - Participation in NeXT's great employee health plan, which includes major medical, dental, vision and prenatal benefits. In addition, NeXT is a smoking-free work environment. - You will be entitled to purchase Six Hundred and Sixty Thousand (660,000) shares of NeXT's common stock under the terms of NeXT's 1990 stock option plan… - I will support your election to NeXT's Board of Directors. NeXT offers no employment contracts, and your employment with NeXT is 'at will' and may be terminated by you or NeXT at any time."

Above the signature line is typed: "I accept this insanely great offer !!!"—"insanely great" being a famous Jobs-ism used to introduce the Macintosh.

The offer letter is signed at the conclusion by both Jobs and Yocam, with Jobs adding two handwritten amendments—"Start date to be Nov. 18th" and "All Functions will report to Del"—both initialed "sj." Jobs also initials a handwritten statement by Yocam, "Janet and I have prepaid for a South American cruise departing Feb. 28, 1992, and ending Mar 14, 1992."

"Letters signed by Steve Jobs are ultra-rare—we've been in business for more than 40 years, and this is the first that we have seen," said Bobby Livingston, Executive VP at RR Auction.

Having been ousted from Apple in the fall of 1985, Jobs founded the innovative NeXT project, a computer and software company aimed at the markets of business and higher education. The first NeXT Computer was introduced in 1988 with great fanfare thanks to Jobs's marketing strategy. At NeXT, Jobs helped to develop a pioneering 'fingerless' automated manufacturing line right in Silicon Valley. He believed that keeping the design, development, and manufacturing in close proximity—all in a single plant, rather than outsourced overseas—would help NeXT out-innovate its competitors by allowing continuous improvement of their products. Although their computers encountered subpar sales, the NeXTSTEP operating system and development environment proved highly influential, forming the basis for Mac OS X. Apple purchased NeXT in 1997 for $429 million and 1.5 million shares of Apple stock, with Jobs, as part of the agreement, returning to the company he had co-founded in 1976.

Despite signing this job offer, Yocam never served as NeXT Corporation's COO and retained the offer letter.

Also featured is a fully operational Apple-1 Computer with its exceedingly rare original box, signed by designer Steve Wozniak; an Apple keyboard signed by Steve Jobs and Steve Wozniak with a great backstory.

Online bidding for the Steve Jobs + Apple Auction from RR Auction began Dec 10 and will conclude Dec 17. For more information, go to www.rrauction.com.