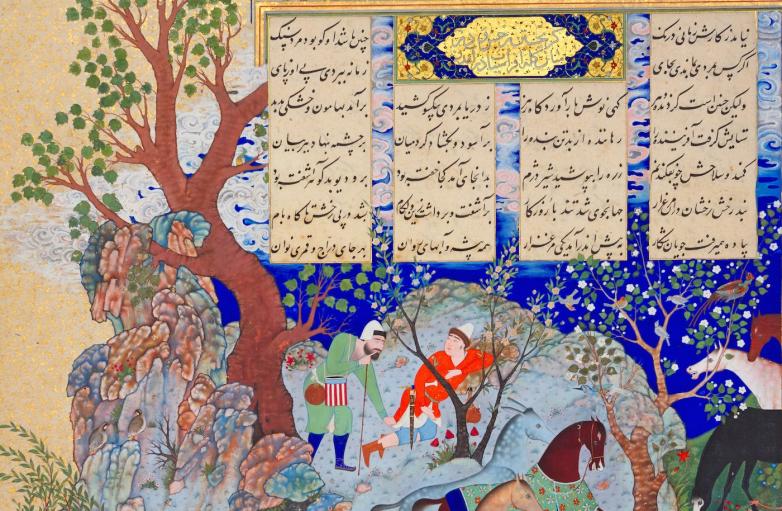 London — The Shahnameh – or ‘Book of Kings’ – made for Shah Tahmasp of Persia (r.1524-76) is one of the finest illustrated manuscripts in existence. The monumental tome covers the greatest epic of Persian literature, containing 50,000 rhyming couplets and tells the history of all Persia’s rulers from the country’s ancient mythical beginnings. The most lavishly illustrated copy of the 10th-century poem in existence, it was illustrated over the course of two decades from 1520 to 1540 by the greatest artists in the royal atelier. It is thought that no other Persian work of art, save architecture, has involved such enormous expense or taken so much artists' time. The result was an unparalleled achievement and stands as one of the greatest works of art in the world.

This October, a magnificent folio from the Shah Tahmasp Shahnameh will make a rare appearance at auction, as part of Sotheby’s bi-annual Arts of the Islamic World & India auction, offered with an estimate of £4,000,000 – 6,000,000. The scene depicts the great hero Rustam recovering his horse Rakhsh – named the Persian word for lightning – two of the main figures over the course of the tale.

The manuscript boasts a glittering provenance from the moment it was commissioned, to the present day. It was commissioned by one emperor, Shah Ismail (the first of the Safavids), completed by another, his son and successor Shah Tahmasp, gifted to a third, Sultan Selim II of the Ottoman Empire, and was later owned by one of the great bibliophilic families of the modern era, the Barons de Rothschild, whose collections included such masterpieces as the Belles Heures of the Duc de Berry and the Hours of Catherine of Cleves. Today, folios from the Shahnameh are treasured in museum collections internationally, including New York’s Metropolitan Museum of Art; The Smithsonian Institution in Washington D.C; The Aga Khan Museum, Toronto; The David Collection, Copenhagen; The Nasser D. Khalili Collection of Islamic Art, London; The Museum of Islamic Art, Doha, and The Museum of Contemporary Art, Tehran.

“The Shahnameh of Shah Tahmasp is a perfect encapsulation of artistic skill, patronage and beauty – universally acknowledged as one of the supreme illustrated manuscripts of any period or culture and ranking among the greatest works of art in the world. The record for any Islamic work on paper is held by a folio from the same manuscript, sold at Sotheby’s in 2011, and so the rare appearance of another at auction represents a great opportunity for collectors in this field and beyond.” --Benedict Carter, Head of Department, Sotheby’s Islamic & Indian Art