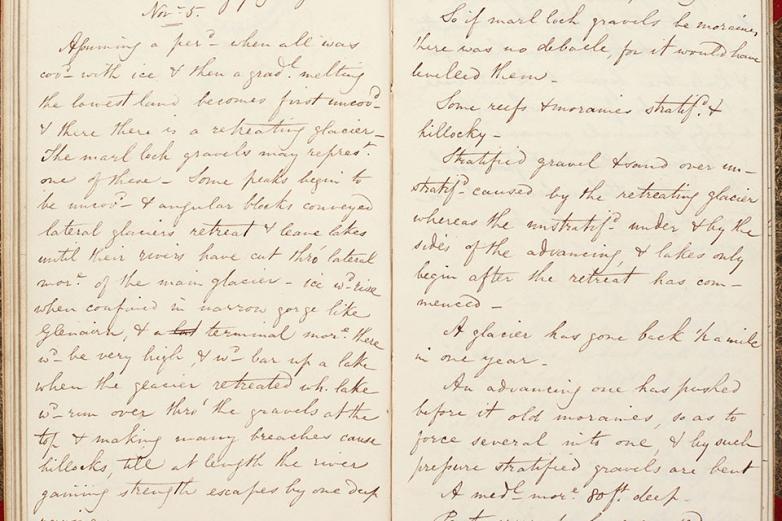 Sir Charles Lyell's notebooks are currently under a UK export ban in the hope that sufficient funds can be raised to keep them from disappearing abroad.

Earlier this year the UK’s Department for Digital, Culture, Media & Sport announced an export ban on the notebooks of nineteenth-century geologist Sir Charles Lyell, Charles Darwin’s mentor. A total of 294 notebooks and manuscripts, which had been kept in the family until now, contain Lyell’s field notes, conversations with fellow scientists, and his transcribed correspondence with Darwin himself. They are in danger of being sold abroad and/or being sold piecemeal unless £966,000 (revised from £1.4 million) can be raised before October 15.

“This archive reveals the workings of one of the most influential scientists of the last 200 years and provides us with an extraordinary insight into a time when science was changing long-held beliefs about the world,” commented Arts Minister Michael Ellis.

Working to keep the notebooks together and 'in country,' the University of Edinburgh launched a pledge drive this past July in which the university and nearly 1,000 other supporters collectively promised £600,000+ toward the goal. That amount convinced Ellis to give the university a three-month extension for fundraising, but the October deadline is fast approaching. At this point, they are still short about £296,000.

Lyell, who died in 1875, is best known for his Principles of Geology (1830-33), a work that is credited with establishing a firm footing for the study of earth sciences. His influence on Darwin—and on science in general—was vast; as Darwin wrote, “I always feel as if my books came half from Lyell’s brains.”

If the university’s appeal is successful, it intends to make the Lyell collection accessible to the public through conservation and digitization.