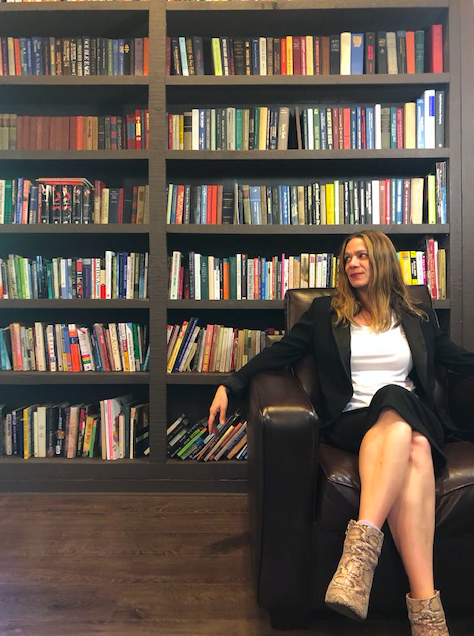 Sara Gran's latest mystery novel, The Infinite Blacktop, was released last year. It's the third book in the excellent Claire DeWitt series, which began with Claire deWitt and the Bohemian Highway, and Claire deWitt and the City of Dead. (We interviewed Gran on this blog in 2013 after the publication of Claire deWitt and the Bohemian Highway). Gran formerly worked in used and rare books, for places like The Strand and Shakespeare and Co, as well and on her own as an independent bookseller. Books - real and imaginary - play significant roles in her novels.  Her private eye, Claire deWitt, is profoundly influenced by an elusive French book of detection from 1959, entitled Détection, which guides - and haunts - her actions throughout the novels.  In one of the three major storylines in The Infinite Blacktop, Claire is trying to track down an elusive Cynthia Silverton comic. As a result, comic book print culture of the 1970s ends up playing a critical role in the mystery. I recently interviewed Gran over e-mail:

One of my favorite things about the Claire DeWitt novels is the deep influence of books unique to Claire's world that make such an impact on her, such as Silette's Detection and the Cynthia Silverton comic books. In The Infinite Blacktop, the final issue of the Cynthia Silverton comics becomes a major plot point. Could you tell us a bit about why that is / making that decision as a novelist?

I think the books we read as children take on such a huge, outsized significance to us, whether we recognize it or not, that it makes a kind of poetic sense for our favorite childhood books to hold the solutions to some of life's mysteries. I've found it deeply fruitful psychologically and creatively to re-read my favorite books from childhood. Childhood is a land that everyone passes through and almost no one remembers; by re-rereading, you will open some strange, long-closed doors.

Are the Cynthia Silverton comics inspired by anything in particular from your own reading / our world?

Yes, lots of things: Nancy Drew (obviously!); Archie Comics; Choose Your Own Adventure books; procedural TV shows like Murder, She Wrote; Dell Mapbacks and other pulp fiction of the nineteen-thirties through the nineteen-eighties; esoteric texts.

Tracking down that comic involves Claire visiting a variety of low-end printers around Las Vegas in an attempt to find the printer of the comic books. Did you become something of an expert on comic book print culture of the 1970s?  What was the research process like for that?

Well, the comic was a short-run so I wasn't exactly looking into comic book culture so much as workaday short-run printing. It was a fun world to dive into and one I've always been interested in. Here's another little print story related to the book and a little mystery: a big clue in the book revolves around the dating of a specific envelope a note was jotted down on. I did some research online about envelopes, particularly security envelopes, and didn't find too much, but enough to make the story work. When on tour for the hardcover, I stopped in a little bookstore in Scottsdale, AZ, that I always visit when I'm town (Alcuin Books). For an unrelated project, I was looking for books on postal and stamp history. I was talking to someone in the bookstore, and she said they had a book on the history of envelopes, but couldn't find it at the moment. Has anyone ever seen this book? Does it exist? Readers, I'm counting on you!

Are you a comic book collector yourself?

I am not, and what collections I do have, I am trying to shave down. Real estate is too expensive.

I personally would love to see a publisher actually produce the Cynthia Silverton comics... is that a possibility?

I would absolutely love that and if any publisher reads this and wants to do me, drop me a note!

This is the first novel in the series to not using the naming convention of "Claire DeWitt and the..." What was the origin of that decision?

My publisher made that decision, for better or worse.

What's next for you? For Claire?

What's next for me is two or three non-Claire-DeWitt books, then hopefully Claire DeWitt book 4, plus the usual assortment of film and TV nonsense. I'm lucky to be busy and love my work.