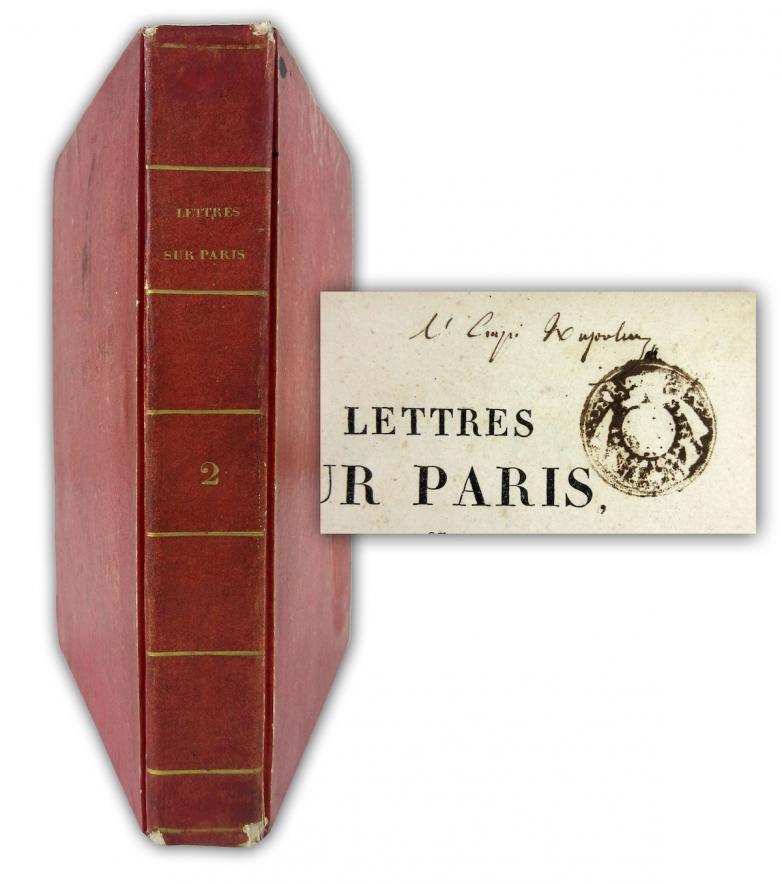 Book on contemporary French politics from Napoleon Bonaparte’s St. Helena library, stamped and inscribed by his librarian on the title page. Estimate: $3,000-4,000

Westport, CT – A black and white photograph of Marilyn Monroe signed and inscribed “to Joe” (possibly Joe DiMaggio), a one-page letter written in 1796 and signed by George Washington on the eve of his retirement, and 25 lots relating to Napoleon Bonaparte (mostly from an important single-owner collection) are all part of University Archives’ next online-only auction slated for Wednesday, November 11th. The auction will begin at 10:30 am Eastern time.

The full catalog, showing all 289 lots, is up for bidding and viewing now, at the newly revamped University Archives website (www.UniversityArchives.com), as well as the online platforms LiveAuctioneers.com, Invaluable.com and Auctionzip.com. Phone and absentee bids will also be accepted. The sale contains rare and highly collectible items from multiple specialty categories.

“Nearly 300 lot of rare and outstanding pieces will cross the block, representing the very best of Kennedyiana, Napoleoniana and the Jack Kerouac estate, as well as exceptional items from the early American, presidential and Civil War categories,” said John Reznikoff, the president of University Archives. “The November sale is not to be missed. We hope everyone can join us.”

The sultry black and white photo of blonde bombshell Marilyn Monroe, signed and inscribed by her as “To Joe / Love & Kisses / Marilyn Monroe” is significant, not only because of its unusually large size (11 inches by 14 inches), but also because it may have been dedicated to Monroe’s second husband, Joe DiMaggio. The photo has a pre-sale estimate of $20,000-$25,000.

The one-page letter signed by George Washington just a few months prior to his retirement from his second presidential term, on Oct. 12, 1796, is expected to bring $13,000-$14,000. Written from his Mount Vernon home in northeastern Virginia, the letter conveys Washington’s thanks to well-wishers from a West Virginia town that had once competed to be named the nation’s capital.

The 25 lots relating to Napoleon Bonaparte (mostly from the Nicholson Napoleon Collection) include a book on contemporary French politics from Napoleon’s St. Helena library, stamped and inscribed by his librarian on the title page (est. $3,000-$4,000); a piece of his trousers associated with the Moscow campaign of 1812 (est. $2,200-$2,400); and a velvet swatch from the “assist strap” of Napoleon’s carriage abandoned after the famed Battle of Waterloo (est. $3,000-$4,000).

A fine example of the rare full signature of the Swedish diplomat and humanitarian Raoul Wallenberg, dated Sept. 26, 1944 and documenting his efforts to help Ungar Imrene Urno to survive the Holocaust, should breeze to $9,000-$10,000. This Official Schultz-Pass document, issued in Budapest, Hungary, bears the original ink stamp of the Royal Swedish Legation.

An attractive document signed by Benjamin Franklin as President of the Supreme Executive Council of the Commonwealth of Pennsylvania, authorizes the sale of land near the Alleghany River to the two sons of Colonel James Burd, Sr., a French & Indian War veteran (est. $8,000-$9,000). Also sold will be a sepia-colored silver gelatin photo of the Austrian psychoanalyst Sigmund Freud boasting a signature measuring over four inches in length (est. $8,000-$9,000).

A military appointment signed by Abraham Lincoln on August 17, 1861, promoting an Irish-born officer named Patrick Collins, who would later fight in the Battles of Second Bull Run and Antietam, should fetch $4,000-$5,000; while a sizable (over 8” x 10”) fragment of an American flag that decorated Lincoln’s funeral train as it traveled between Indiana and Springfield, Illinois, with direct provenance from an Indiana farm family, has a pre-sale estimate of $2,400-$2,600.

An autograph letter signed with rank by the flamboyant Confederate cavalry commander J.E.B. Stuart, penned just two months before his death at the Battle of Yellow Tavern in April 1864, is addressed to Charles Lownes. In the letter, Stuart seeks Lownes’ assistance in helping his wife purchase a home, and commends Lownes on his active military service (est. $10,000-$12,000).

November will see more items from the estate of Father Ronald Hoskins (1949-2020), the noted assassinologist and collector of JFK memorabilia, with 40 lots relating to JFK and Jackie Kennedy, JFK Jr., Lee Harvey Oswald, Jack Ruby and others. John F. Kennedy, Jr.’s signed Manhattan District Attorney’s office badge will be sold (est. $500-$600), as will his personally owned "Piper" brand baseball cap recovered from his Saab in the days following his plane crash.

Also from the Hoskins collection is a 1962 letter signed by Lee Harvey Oswald, sent to his mother from the Soviet Union, discussing the upcoming Texas gubernatorial election that would place Oswald’s unintended Dallas motorcade victim John Connally in office (est. $4,000-$5,000); and two lots of Jack Ruby signed colorful and mesmerizing geometrical drawings, sketched by him while incarcerated at the Dallas County Jail in Texas (each est. $1,000-$1,200).

A fascinating and enormous archive documenting the journalist Arthur Ruhl’s incredible career from 1898-1934, totaling nearly 1,000 pages and ranging in subject matter from early aviation and the Wright Brothers to World Wars I and II, is estimated to reach $6,000-$7,000. Also, literary aficionados will enjoy a lengthy autograph letter written in Italian (and translated in full), signed by British author Mary Wollstonecraft (Frankenstein), writing of her travels in Europe in the 1840s (est. $4,000-$5,000).

A single-page letter written by Oliver Cromwell, signed “Oliver P” as the Lord Protector of the Commonwealth, dated Jan. 27, 1654, in which he readies the Summer Guard to defend British shipping from Barbary pirates, should garner $4,000-$5,000. Also, four pieces of dishware from the World Trade Center’s “Windows on the World” restaurant (a salad plate, a dinner plate, a dessert plate and charger), spared the September 11th attack, carry an estimate of $1,000-$2,000.

A one-page handwritten letter signed by actor William Shatner (no place or date), in which he offers his recollections on the bumpy release of the first Star Trek movie in 1979, saying “it went on a little too long,” is estimated to go for $2,000-$3,000; and a book club edition copy of the book First on the Moon (Little, Brown and Company, Boston, 1970), boldly signed on the half title page by astronaut Neil Armstrong, with a letter of authenticity, should bring $1,800-$2,000.

A collection of 37 books, all of them signed by former President Richard Nixon – including hardcovers and softcovers, some of them inscribed – with “Library of Lawrence E. Miller” blindstamps to the rear pages, should sell for $3,000-$3,500. Also, a drawing by the legendary cartoonist Charles Schulz of Snoopy as the Flying Ace, with a scarf around his neck and goggles on his forehead, signed by Schulz on Christmas stationery, is estimated to sell for $800-$900.