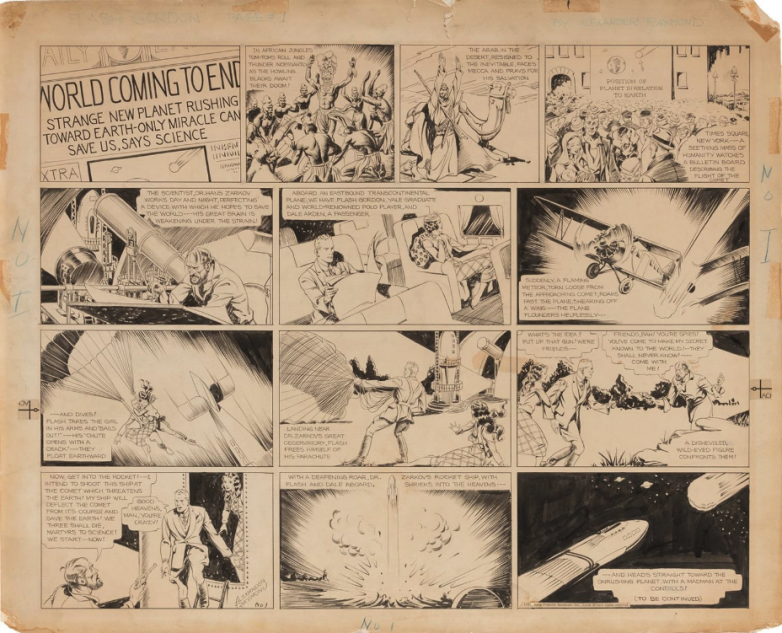 The original pencil and ink drawing for "Flash Gordon No. 1" (1934), offered at Profiles in History this week.

On Tuesday, March 31, Books and Works on Paper including Autographs and Memorabilia at Chiswick Auctions. The 413 lots include an original Arthur Rackham pen, ink, and watercolor drawing, "The Old Hag Standing Outside a Cottage," estimated at £10,000–15,000. A large seventeenth-century Spanish antiphonal manuscript could sell for £4,000–6,000; the same estimate has been assigned to a near-complete run of the Almanach de Gotha.

The Spring Auction at Alexander Historical Auctions ends on Wednesday, April 1. The 1,422 lots include a pair of early autograph poems by Australian poet Adam Lindsay Gordon ($10,000–15,000). There are a number of lots that will be of interest to the WWII collector in this one.

Arader Galleries will hold their April Auction on Saturday, April 4. The 221 lots include an impressive array of Audubon plates, as well as a third edition of John Mitchell's "Map of the British and French Dominions in North America" (1755), estimated at $250,000–350,000. A Ferdinand Verbiest world map, printed around 1860 at Seoul, could sell for $100,000–150,000; the same estimate has been given to a copy of Juan Gonzales de Mendoza's Historie of the great and mightie kingdome of China, translated by Robert Parke and published at London in 1588.