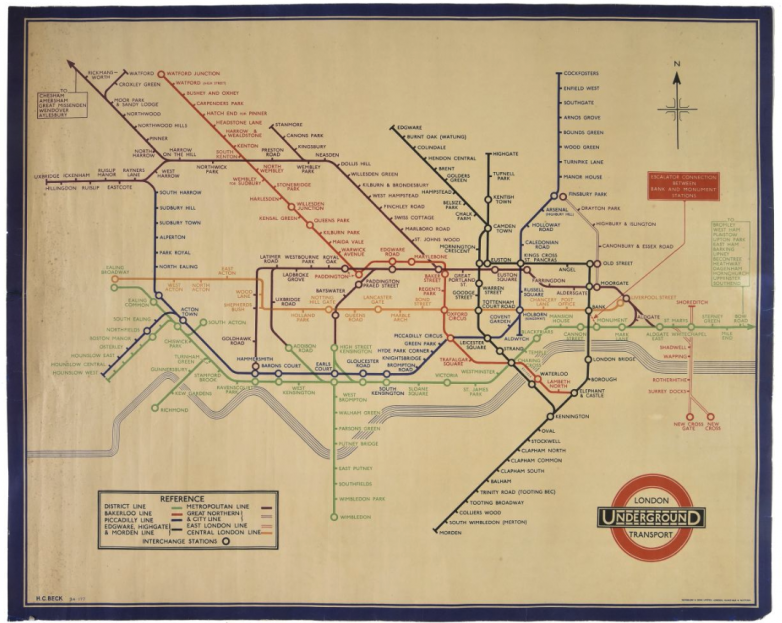 A 1934 map of the London Underground, offered at Dominic Winter Auctioneers this week.

At Dominic Winter Auctioneers on Wednesday, March 4, Printed Books, Maps & Documents, Books from the Library of Dawson Turner, and the John Lawson Reference Library. The 434 lots include a 1934 London Underground map, estimated at £20,000–30,000. An illustrated manuscript account of Dawson Turner's 1815 tour from London to Paris could sell for £7,000–10,000. A later issue copy of George Edwards' Natural History of Uncommon Birds is estimated at £3,000–5,000.

Heritage Auctions holds their Rare Books sale in New York on Wednesday, in 455 lots. A first book edition of The Federalist, given by James Madison to diplomat James Maury, has a reserve of $250,000. A first printing of Leaves of Grass with the second-state copyright page is reserved at $55,000. A first edition of Emma Smith's Collection of Sacred Hymns Nauvoo hymnal will sell for at least $50,000. Seven original parts from the octavo edition of Audubon's Birds of America will fetch at minimum $1,550.

Also on Thursday, 447 lots of Rare Photography: Books & Images – The Robert Enteen Collection. With Illustration & Fine Books at PBA Galleries. An album of 76 Albertypes from photographs by William Henry Jackson, taken on the 1871 Hayden Geological Survey of the Yellowstone region, is estimated at $20,000–30,000. Just five sets of these Albertypes are known, with this copy containing some images not known in the other copies. A copy of Photographs by Man Ray (1934) could sell for $10,000–15,000. These both are part of the Robert Enteen collection, documenting the first century of photography (Lots 1–238 in this sale). Lots 382–416 are related to Patti Smith, and Lots 417–466 are being sold without reserve.

At Bonhams New York on Friday, 6 March, Fine Books and Manuscripts, in 114 lots. The original engrossed copy of the first impeachment resolution against Andrew Johnson, which failed in December 1867, is estimated at $120,000–180,000. This document was compiled by House engrossing clerk Isaac Strohm. An Isaac Newton autograph manuscript in English from around 1710, in which Newton explored the nature of God, is estimated at $100,000–150,000. Bonhams calls this the "most important Newton manuscript on theology to be offered at auction during the last 50 years." Also at Bonhams, several handwritten Elton John lyrics and a number of Shel Silverstein illustrations.