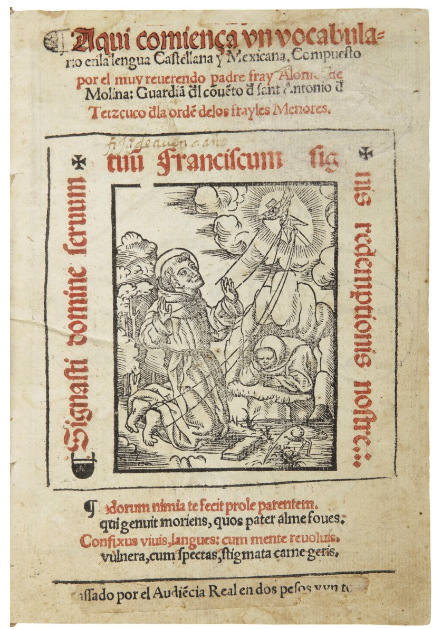 Lots to watch in the auction rooms this week:

As part of Americana Week, Sotheby's New York will sell Fine Manuscript and Printed Americana on Monday, January 27. The 169 lots include some material from the stock of Joe Rubinfine (see Rebecca's recent post about him for more). A letter announcing the adoption of the Declaration of Independence, signed by John Hancock, is expected to lead the way, with an estimate of $600,000–800,000. A first edition, third issue of John Smith's Generall Historie of Virginia (1627) once in the libraries of the Calvert family and of famed collector Jay Snider, could fetch $220,000–260,000. A book printed in Mexico City in 1555, Alonso de Molina's Vocabulario, which contains the first vocabulary of Nahuatl, is estimated at $200,000–300,000. Only one other copy has been documented at auction. Anyone keen on Americana will want to have a thorough look through this catalogue.

On Tuesday, January 28, Chiswick Auctions will hold two sales: Books & Works on Paper and Autographs & Memorabilia. The first features 235 lots, among them a copy of the 1517 edition of the Malermi Bible in Italian, estimated at £8,000–12,000. The autographs and memorabilia sale includes 299 lots, with a photograph of the 1944 Commonwealth Prime Ministers Conference signed by the participants rating the top estimate at £8,000–12,000.

On Thursday, 30 January, there will be an online sale of Books and Works on Paper at Forum Auctions (online) on 30 January. The 202 lots include a first edition in Latin of Yosef Gikatilla's Portae lucis (Augsburg, 1516), with some leaves supplied in facsimile, estimated at £800–1,200. A 1915 edition of Dickens' A Christmas Carol, illustrated and signed by Arthur Rackham, could sell for £600–800.

Freeman's afternoon sale includes 414 lots. Several framed Audubon birds are expected to lead the auction, but some of the notable manuscript lots include a collection of correspondence between the Comte d'Artois (later Charles X) to the Comte Vaudreuill, 1789–1805, estimated at $30,000–50,000. At the same estimate is a 1634 Dutch municipal bond on parchment, believed to be the second oldest bond still paying interest.