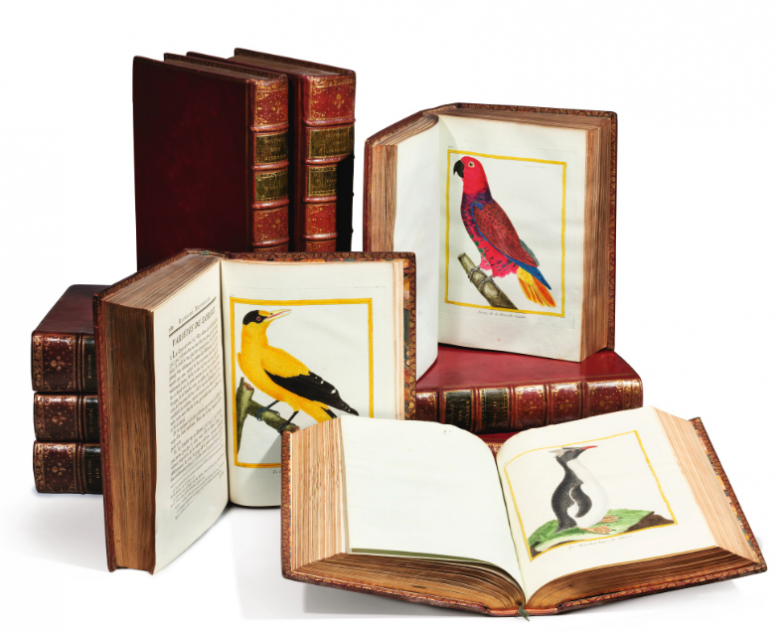 At Sotheby's Paris on Monday, November 18, Bibliothèque Jean-François Chaponnière : Une collection Genevoise, in 285 lots. A 1772 Mozart manuscript of two complete minuets is expected to lead the way, estimated at €150,000–200,000. Buffon's Histoire Naturelle des Oiseaux (1770–1786), from the library of Abel Smith of Woodhall Park, could sell for €40,000–60,000. They will also sell 47 lots of Artistes et Relieurs: Livres et Manuscrits, including Delaunay and Cendrars' La Prose du Transsibérien et de la Petite Jehanne de France (1913), one of 28 copies on Japan paper (€200,000–300,000). There are some truly fabulous bindings in this one, so do have a look through the catalogue.

Sotheby's London sells the Cottesloe Military Library on Tuesday, November 19. Leading lots are expected to be a copy of the first edition of Galileo's Discorsi e dimostrazioni matematiche (Leiden, 1638) from the library of Cardinal Carlo Massimo (£30,000–40,000); and Caxton's 1489 edition of The boke of the fayt of armes and of Chyvalrye, the first continental military book to be printed in English. A presentation copy to Charles II of Henry Hexham's Principles of the Art Militarie could sell for £20,000–30,000.

Another tranche of Aristophil auctions will also be held this week in Paris:

At Aguttes on Monday, November 18, Britannica – Americana (Aristophil 22), in 200 lots. The Charlotte Brontë "little book" Second Series of the Young Men's Magazines rates the top estimate by a mile, at €600,000–800,000. Also on Monday at Aguttes, Aristophil 26 is Pages d'Histoire, in 112 lots, which will be of interest to the Napoleona collectors.