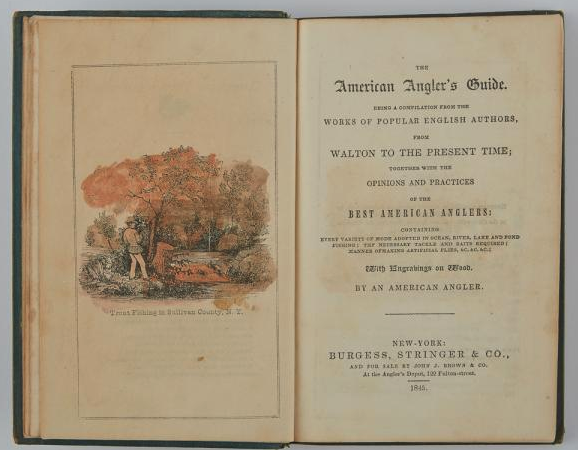 First edition of the first angling book written by an American, offered at Doyle New York on Tuesday.

Doyle New York holds an online sale of Angling & Miscellaneous Books from the Library of Arnold "Jake" Johnson, ending on Tuesday, August 13. The 365 lots include a copy of the 1866 Little, Brown edition of Izaak Walton's Complete Angler in a binding by the Philadelphia firm Pawson & Nicholson ($800–1,200). A photo album documenting a fishing trip on Quebec's Saguenay River around 1900 could fetch $500–800; a first edition of John Brown's The American Angler's Guide (1845), the first angling book written by an American, rates the same estimate.

Heritage Auctions sells The Glynn and Suzanne Crain Science Fiction Collection on Tuesday and Wednesday (August 13–14), in 461 lots. Several pieces of original cover art are expected to lead the way: they include James Allen St. John's 1922 oil on board painting used for the dust jacket of Edgar Rice Burroughs' At the Earth's Core (estimated at $75,000+). A full set of first U.S. editions of all seven Harry Potter books (the first four signed by Rowling) had been bid up to $12,500 as of Sunday afternoon.

Also on Wednesday, Dominic Winter Auctioneers sells 251 lots of Printed Books, Maps & Documents. A 64-volume set of Pevsner's The Buildings of England, Wales & Scotland is estimated at £400–600, or you could buy a 72-volume lot of bindings (£300–500). Several large lots of Folio Society publications are also up for grabs.