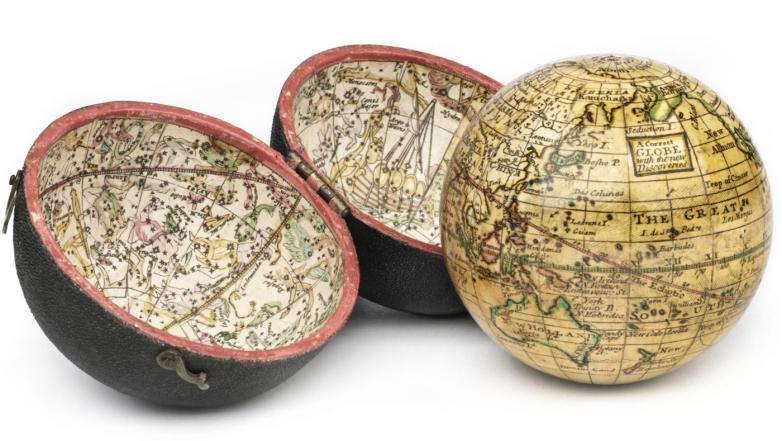 A pocket globe, made around 1785, offered at Dominic Winter Auctioneers this week.

A busy week on tap in the auction rooms:

Aguttes sells 230 lots of Manuscrits & Lettres Autographes on Tuesday, January 25. A 25-page Georges Bizet autograph music manuscript is expected to lead the sale at €28,000–30,000. Fifty letters from Sacha Guitry to Yvonne Printemps are estimated at €10,000–15,000, and a large collection of journals, books, and offprints of Albert Einstein writings could sell for €8,000–12,000.

Sotheby's New York's sale of Fine Books and Manuscripts, Including Americana also ends on Tuesday. The 159 lots include a large portion of Audubon's draft description of the wild turkey for his Birds of America, which could sell for $250,000–350,000. A first edition of Leaves of Grass signed by Whitman is estimated at $150,000–200,000.

On Wednesday, January 26 at Dominic Winter Auctioneers, Printed Books & Maps, The Sinclair Hood Library of Archaeology, The Charles Tomlinson Poetry Library. The 471 lots include the first two volumes of Sir William Hamilton's Collection of Etruscan, Greek and Roman Antiquities (1766–1767), which could sell for £7,000–10,000. William Tomlinson's Oriental Field Sports, illustrated by Samuel Howett (1807) is estimated at £5,000–8,000. A c.1785 English pocket globe is expected to realize £2,000–3,000.

The online sale of The Library of Justice Ruth Bader Ginsburg at Bonhams New York ends on Thursday. The 166 lots include large group lots of titles from the late justice's library on various topics, some of her law school textbooks, and many presentation copies from colleagues and admirers. More here.