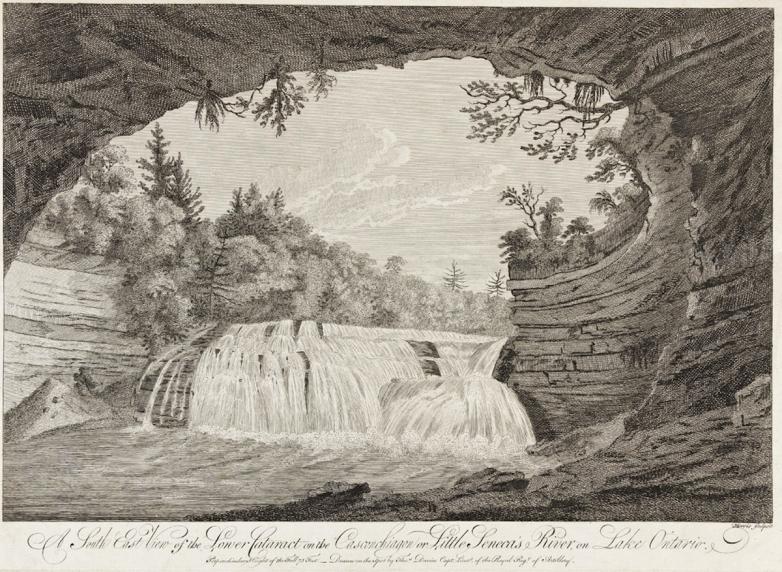 Engraving after Thomas Davies of an American waterfall (1768), offered at Swann Galleries this week.

At Bloomsbury on Tuesday, December 7, The History of Western Script: A further selection from The Schøyen Collection. The 60 lots include an Egyptian thirteenth dynasty gold foil funerary inscription bearing the name of Princess Nubhetepti-khered (£30,000–50,000). At the same estimate is a six-leaf fragment of a ninth-century Carolingian manuscript. A sixth-century-BCE dedication for a traveler's staff, made by impressing a mold into gold leaf, could sell for £20,000–30,000. A tenth-century Visigothic miniscule manuscript fragment containing Smaragdus of St-Mihiel's commentary on the Rule of St. Benedict rates the same estimate, as does another tranche of E.H. Dring's collection of charters, this lot comprising 161 manuscript charters. For the text historian, much more of great interest here.

The Sotheby's Paris sale of Livres et Manuscrits ends on Wednesday, December 8. The 127 lots include the autograph manuscript of Émile Zola's adaptation of his novel Germinal for the stage, the last major Zola manuscript in private hands (€100,000–150,000). The 1561 edition of Jacques du Fouilloux's La Venerie is estimated at €60,000–80,000.

On Thursday, December 9 at Bellmans, Printed Books, Manuscripts and Maps.

Rounding out the week, Arader Auctions holds their December Auction on Saturday, December 11, in 163 lots. Expected highlights include a copy of Gardner's Photographic Sketch Book of the War (1866), estimated at $200,000–250,000, and a manuscript road map from about 1765 charting the route from what is now Charlestown, Massachusetts to North Yarmouth, Maine ($70,000–100,000).