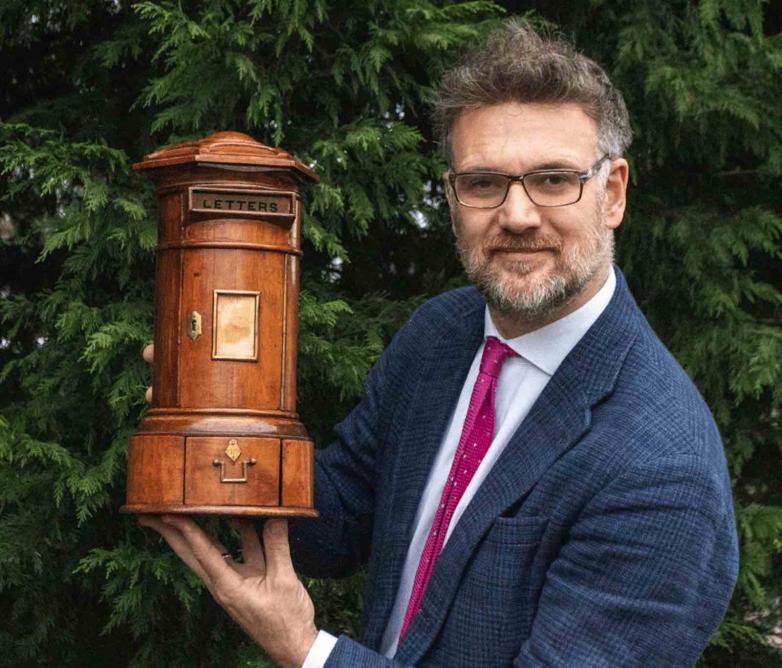 The discovery of Queen Victoria’s royal post box – with a festive card inside – has underlined the importance of preserving Christmas traditions as strikes and stamp prices crush card joy.

The 140-year-old table letter box used for the famous royal’s post at Osborne House, her Isle of Wight holiday home, shows how much she valued sending mail, according to Hansons Auctioneers.

The late 19th century curved wooden box, which features  her royal cypher ‘VR’ (Victoria Regina) was found in a Surrey cottage crammed with unusual antiques. It’s now set for auction on January 28 with an estimate of £4,000-£6,000.

Charles Hanson, owner of Hansons Auctioneers, said: “It’s a first class find fit for a queen dating back to circa 1880. We can only imagine the tone and content of the notes the queen must have placed inside but one thing we can be certain of is that she enjoyed sending letters and cards.

“Most people still do but, sadly, postal strikes, high stamp prices and the cost-of-living crisis have curbed that simple pleasure. I wonder what Queen Victoria would have thought about postal costs rising from a penny in the 1800s to 95p for a first class stamp today. Her profile featured on the Penny Black, the world’s first adhesive postage stamp issued in 1840.

“My family received hardly any Christmas cards compared to previous years and many people I know say the same. That’s such a shame. Christmas is often the only time we hear from old friends or family far away. It’s a festive tradition that’s delivered joy for generations. Costs appear to be crushing this annual gesture of goodwill.

“I was reminded of this when we discovered the letter box because the seller found a vintage Christmas card inside. The price of a couple of stamps could buy a pack of cards today. With soaring inflation and winter fuel bills to contend with, it’s not surprising some people didn’t send many, or any."

Chris Kirkham, associate director of Hansons London, where the letter box will be offered at auction,  said: “I discovered it during a routine home visit at a cottage in Surrey. I was called in to assess items gathered by a keen antiques collector over a lifetime.

“It was purchased decades ago by the seller’s grandfather. He lived on the Isle of Wight. We understand he acquired it at a Carisbrooke sale which offered items relating to Osborne House in 1944 or 1945. The Isle of Wight is home to Carisbrooke Castle Museum. It was  founded in 1898 by Princess Beatrice, Queen Victoria’s youngest daughter. The Princess died in 1944 and a sale of items took place around that time.”

The seller, from London, said: “My grandfather collected amazing objects over the course of his life. He was fascinated by antiques and collectables. We think the  post box may have been given as a festive gift as we found a Christmas card inside. It’s hard to part with family heirlooms but this royal item deserves to be seen and enjoyed.”

Queen Victoria (1819-1901) was Queen of Great Britain and Ireland from June 20, 1837 until her death in 1901. Osborne House in East Cowes, Isle of Wight, was built for her and her husband Prince Albert as a rural retreat.

Queen Victoria’s letter box will be offered at auction by Hansons London on January 28. Catalogues/bidding: hansonslive.co.uk or www.the-saleroom.com