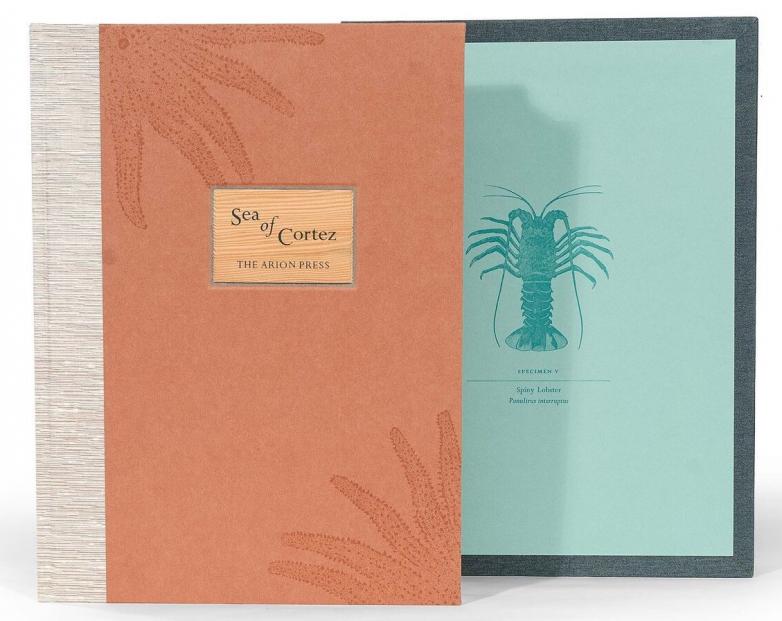 The new Arion Press edition of Sea of Cortez.

The 1940 voyage to the Sea of Cortez (now the Gulf of California) undertaken by novelist John Steinbeck and marine biologist Ed Ricketts has long stirred our imaginations. Only the year before, Steinbeck had published The Grapes of Wrath, while Ricketts had issued Between Pacific Tides, an ecological study. The two were great friends, and their plan to sail the Western Flyer down to Mexico and cowrite a book about the journey worked, for the most part.

The following year, their collaboration, Sea of Cortez: A Leisurely Journal of Travel and Research, appeared. Comprised of a narrative log and a 328-page catalogue of sea creatures, it is a book perhaps less well known in the Steinbeck canon than among those interested in the history of modern environmentalism. But ten years later, after Ricketts’ death, Steinbeck had a shorter version of the book reissued under a slightly different title — The Log from the Sea of Cortez — and with only his name as author. Scholars can only guess at the reason for this literary slight.

In 2014, the wooden boat Steinbeck and Ricketts had commissioned for their trip, docked and decaying in Port Townsend, Washington, became an object of debate. Some wanted to restore it, others wanted to install it a showpiece in a hotel. As we reported in 2018, a foundation is funding its current restoration, with plans to begin sailing again next year.

And now, Arion Press has again renewed our interest in this tale. Eighty years after the famous excursion, the San Francisco-based press has published a letterpress “hybrid” edition of Sea and Log. This handcrafted, fine press edition incorporates reclaimed wood from the Western Flyer and illustrations by the renowned wood engraver Richard Wagener, as well as an original map and endpapers by artist Martin Machado. The edition is limited to 250 copies in three binding options, however the most expensive Variant and Deluxe editions are already sold out. The Limited Edition, pictured at top, is “bound in striated pearlescent cloth with deep red coral paper sides imprinted with a starfish motif derived from Wagener,” according to the prospectus. It retails for $2,200. A limited number of Western Flyer prints are also available.