If you're trying to justify a trip to Ireland this March for reasons that don't involve Guinness and little green leprechauns, consider a visit to the National Library of Ireland's award-winning exhibit on William Butler Yeats (1865-1939). You certainly wouldn't be alone--since it's opening in 2006, more than a quarter of a million people have made the journey to Dublin to explore Ireland's preeminent twentieth-century poet and playwright. 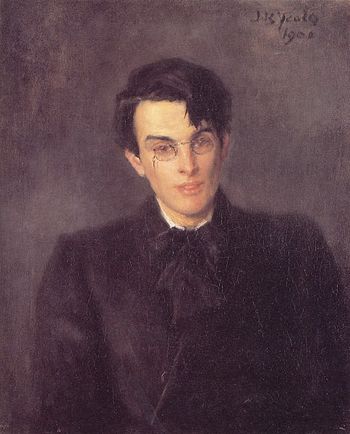 Winner of the 1923 Noble Prize for literature, Yeats was a major force behind reviving international interest in Irish literature. In 1892, he founded the Irish Literary Society along with fellow writer T. W. Rolleston and Irish nationalist Charles Gavan Duffy. The group's goal was to promote the intellectual and literary renaissance in Ireland, and met at Yeats' home on Blenheim Road in London. Yeats published Celtic Twilight, in 1893,  a volume that American poet Edward Hisrch called a 'curious hybrid of the story and essay,' in the 1981 issue of the Journal of the Folklore Institute. In fact, Celtic Twilight was a collection of Yeats' stories and poems that had previously appeared in newspapers throughout the UK, with a focus on Irish folk and fairy tales. The book's title eventually became synonymous with the literary movement. Yeats' social engagement wasn't limited to the literary scene either: In 1922 he became a senator in the newly formed Senate of Ireland, where he served two terms. (Despite best intentions, the Senate was eventually abolished in 1936.)
The National Library of Ireland is the world's largest repository of Yeats' notebooks, manuscripts and other materials, which were donated by the author's widow. The exhibition draws on these items to create a thematically organized walk through Yeats life, work and enduring influence. (Note: while patrons must have a reader's card or temporary pass to enter the National Library itself, this exhibit is open, free, to the visiting public.) Still can't get to Dublin? The entire exhibit is accessible online--a fascinating multimedia experience that seamlessly wields 21st-century technology to explore the lasting and poignant significance of one of Ireland's greatest champions.
The exhibit of the Life and Works of William Butler Yeats at the National Library of Ireland can be accessed here: http://www.nli.ie/yeats/
Related articles