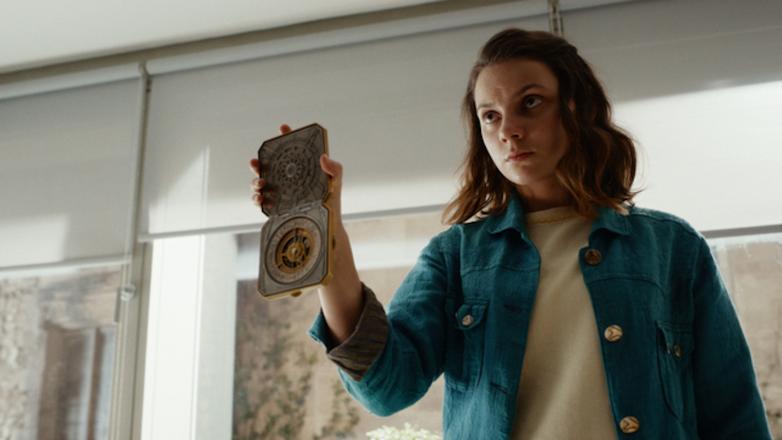 Lyra brandishes her alethiometer in the television series

Cities in England and Wales are offering a behind the scenes look at the making of the HBO and BBC’s multi-award-winning His Dark Materials series to coincide with the third and final instalment of Philip Pullman’s trilogy comprising Northern Lights, The Subtle Knife, and The Amber Spyglass.

In Oxford, the Pitt Rivers Museum, the History of Science Museum and The Story Museum are working together to recreate ‘Lyra’s World’ across the city that inspired the trilogy, using objects on loan from the production company behind the series, Bad Wolf. The History of Science Museum has reconstructed Lyra’s study in Jordan College and is also exhibiting costumes worn by the Master of Jordan College, Lyra, Will Parry, Mrs Coulter, Lord Asriel, Billy Costa, Roger Parslow, and Dr Mary Malone. Lyra’s alethiometer is on display alongside astrolabes, astronomical compendia and sundials from the museum’s collection which all inspired Pullman.

Pitt Rivers Museum, which also features in The Subtle Knife and was a filming location for the television series, has an amber spyglass, seed pods from the Mulefa World and Mary Malone’s I Ching Sticks on display, integrated with the other display cases that influenced Pullman such as items from the Arctic Circle. Lyra’s coat, hat and gloves, and Ruta Skadi’s dress, armour and throwing nails, and Mrs Coulter’s locket are also on show. The Story Museum’s offering includes Pullman’s own alethiometer, specially commissioned by him in 2005, the subtle knife, the dress worn by witch Serafina Pekkala, and the green writing case and airmail letters written by John Parry to his wife.

The displays run through April 2023.

Meanwhile, The Glynn Vivian Art Gallery in Swansea, Wales, is presenting a look behind-the-scenes of His Dark Materials, again in collaboration with Bad Wolf. The majority of the series was filmed at Wolf Studios Wales in Cardiff. In the Atrium space visitors can see key props such as the alethiometer, the subtle knife, and the amber spyglass, as well as larger set pieces such as the Cittàgazze angels, Magisterium banners, and Lord Asriel’s projector. Also on show are costumes from characters across all three seasons, plus concept boards, illustrations, videos and visual effects sequences.

The exhibition runs until April 23.