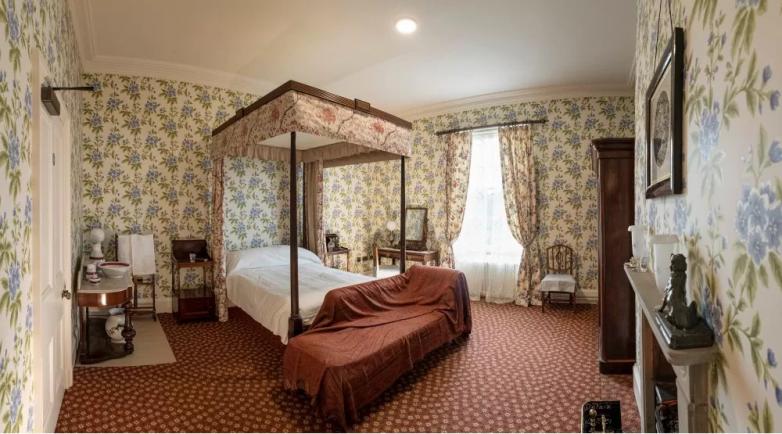 The refurbished bedroom at Elizabeth Gaskell’s House in Manchester, England.

After the death of English novelist and biographer Elizabeth Gaskell (1810-1865), her home at 84 Plymouth Grove, Manchester, where she wrote Cranford and welcomed visitors including Harriet Beecher Stowe and Charles Dickens, gradually fell into disrepair. Happily, the Regency-style villa reopened in 2014 as a museum celebrating her life and works following a £2.5-million restoration.

However, that refurbishment did not include Gaskell’s bedroom where she wrote letters and short stories. This has now been rectified following a fundraising campaign started just before UK’s pandemic lockdown in 2020 and run largely by volunteers at what is now called Elizabeth Gaskell’s House.

Meticulous research included the 1914 auction catalogue for the sale of the house on the 1913 death of Gaskell’s daughter Meta who lived there following her mother’s death. The bedroom now boasts a new fireplace, typically vibrant Victorian wallpaper (courtesy of local historic wallpaper specialists Little Greene), nightstands, and of course the bed, a four-poster made around 1785. Also on display, on loan from the Gaskell Family Collection, is an original hooded cape, lace gloves and lace shawls belonging to Elizabeth and her daughters. The room is also available for use now as a dressing room for people who hold their wedding ceremony at the house.

“Mrs. Gaskell’s bedroom will draw visitors to another dimension of the house,” said Sarah Prince, Elizabeth Gaskell’s great-great-great-granddaughter. “We are treated to not just the public rooms of this wonderful Victorian home, but a private and intimate space that would have nonetheless been at the heart of her home.”

To coincide with the renovations, a new exhibition, A Love Affair with Cranford, runs until May 2022, examining Gaskell’s most famous novel and including one of the costumes that Dame Judi Dench wore as Miss Matty Jenkyns in the award-winning 2007 BBC production.