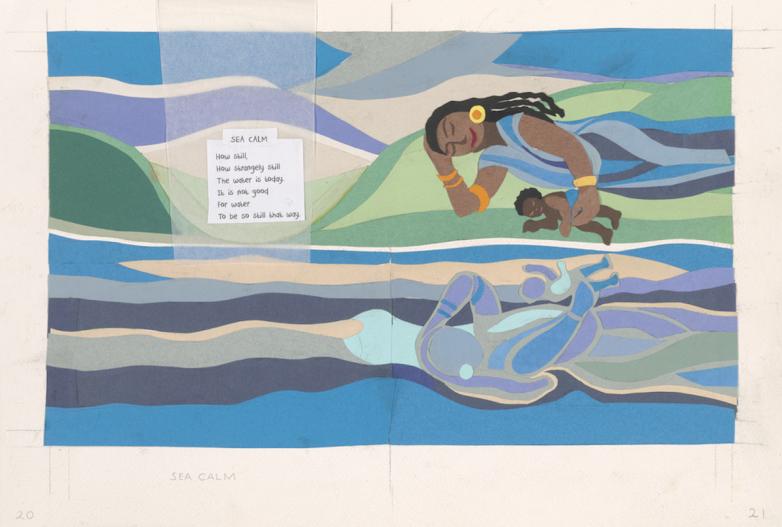 New York – The Morgan Library & Museum is pleased to announce the acquisition of the preliminary drawings and collages that appear in Ashley Bryan’s 2015 book Sail Away (Simon & Schuster). Generously given to the museum by the Ashley Bryan Center, the splendid gift is a particularly fitting one. As both a library and a museum—an institution for great works of both literature and art—the Morgan serves as the perfect home for Sail Away, in which Bryan’s magical cut-paper collage compositions illuminate the stirring words of one of our country’s most important poets, Langston Hughes. For the book, Bryan chose poems by Hughes on the subject of seas, sailing, and rivers, including his iconic poem "The Negro Speaks of Rivers." This gift marks the first major collection of materials created by an African American children’s book author and artist to enter the Morgan’s holdings. The Morgan is especially strong in collections that document the creative process, and the new acquisition includes not only preliminary drawings but also handmade book dummies that allow us to follow Bryan’s method of working as he developed the illustrations for publication.

The Morgan will celebrate Ashley Bryan with an exhibition showcasing Sail Away alongside a selection of his work in fall 2022. The exhibition will explore the themes of the book, examining how Hughes and Bryan employed oceans and rivers in their respective artistic careers. The Morgan’s Director, Colin B. Bailey, said, “The Morgan is delighted to have received this most generous gift of Ashley Bryan’s artwork for Sail Away. We are indebted to the Ashley Bryan Center for their confidence in us, which will allow the Morgan to house and present Bryan’s remarkable collages and drawings illustrating the words of eminent poet Langston Hughes.”

About Ashley Bryan
Born in 1923, Ashley Bryan is an African American artist raised in the Bronx, New York. At age seventeen, he entered the Cooper Union School of Art and Engineering, having been denied entry elsewhere because of his race. Drafted out of art school into the segregated U.S. Army at age nineteen, Bryan preserved his humanity throughout World War II by drawing, stowing supplies in his gas mask when necessary. After the war, he completed his Cooper Union degree, studied philosophy and literature at Columbia University on the GI Bill, and then went to Europe on a Fulbright scholarship, seeking to understand why humans choose war. In 1950, renowned cellist Pablo Casals agreed to break the vow of silence he had taken after Franco came to power in Casals’s native Spain. He permitted Bryan to draw him and his fellow musicians during rehearsals in Prades, France, where Casals was in exile. Through the power of Casals’s music sessions, something “broke free” for Bryan: “I found the rhythm in my hand.” Bryan returned to the United States, where he taught art at several schools and universities, before retiring in the 1980s to Maine’s Cranberry Isles as Professor Emeritus of Dartmouth College. Meanwhile, he published books—more than fifty to date.

Among Bryan’s awards are the Coretta Scott King–Virginia Hamilton Award for Lifetime Achievement, the Laura Ingalls Wilder Medal, and the New York Public Library’s “Library Lions” Award. Throughout the United States and Africa, libraries, children’s rooms, and literary festivals are named for him. As much as Bryan is humbled by these honors, it is the joy of creation and the excitement he sees in children’s eyes, that delights him most.