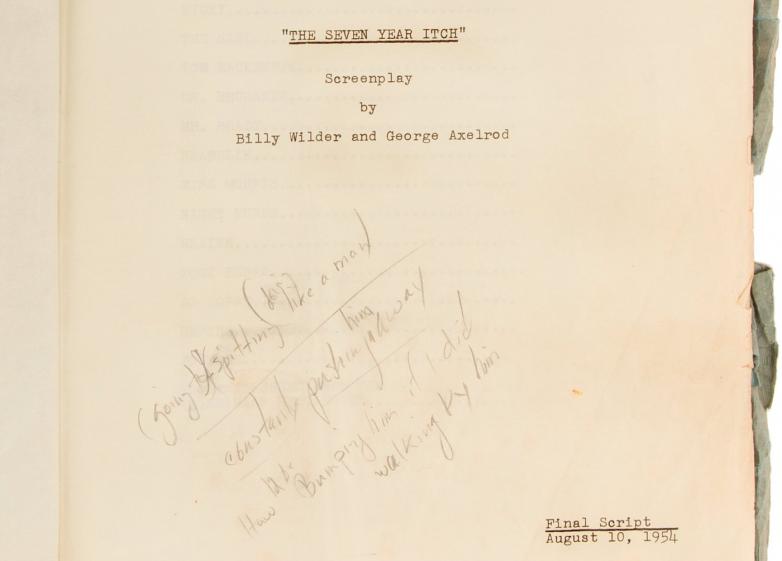 Dallas, TX – To the casual observer, Marilyn Monroe was the ultimate Hollywood bombshell, a hybrid of stunning good looks and an alluring personality that made her the standard by which all sex symbols were measured.

But thumbing through her annotated movie scripts reveals that she was far more than just a bundle of curves and charisma. She was a serious student of acting who took a very cerebral approach to her craft.

One such script (estimate: $120,000), from one of her most popular and important films, is available in Heritage Auctions’ Entertainment & Music Memorabilia Auction July 16-18. Monroe’s Personal Heavily Hand-Annotated Shooting Script for The Seven Year Itch (TCF, 1955) will afford its new owner much more than a review of the lines in the classic film.

“This script is incredible – not just because of the film itself, but because of what it shows about Marilyn Monroe,” Heritage Auctions Executive Vice President Joe Maddelena said. “So many people look at her and see this beautiful, glamorous star, the cultural icon, but she was so much more than that. She wasn’t really ‘Marilyn Monroe’ in the way that we think of her.

This is an amazingly rare document, showing the process behind the mind of Monroe, and so much more behind the film with that iconic scene.

D.W. Griffith Signed Contract for The Birth of a Nation (aka "The Clansman") (D.W.Griffith Corp., 1915) comes from a film as reviled as it is revered, both a technical marvel and a movie “regarded as outrageously racist even at a time when racism was hardly a household word,” revered film critic Andrew Sarris said.

The film’s singular embellishments absolutely transformed cinema; for decades film-school professors taught it only to celebrate its technique and study its scope. Larded with all that history comes this the document that led to the film’s very creation. Offered is the original three-page typed contract (estimate: $50,000+) which details producer agreement, investments, returns and royalties for the film. From so much legalese would follow a century's worth of popularity, protest and scholarship.

A Gone With the Wind Shooting Script With Alternate Ending in Leather Cover from Script Clerk Connie Earl (MGM, 1939) offers an alternate ending to the timeless Civil War epic. Generations of film fans know the scene released version, in which Clark Gable’s Rhett Butler tells Vivien Leigh’s Scarlett O’Hara, “Frankly my dear, I don’t give a damn” – the unforgettable line that leads to film’s final line: “After all, tomorrow is another day.”

But there was a different version of the ending of the Civil War epic … and Heritage Auctions has the Script Supervisor’s copy in this auction to prove it. In this script (estimate: $10,000+), Miss Scarlett delivers the line, "Rhett!... Rhett!... You'll come back. You'll come back...I know you will!..." This is an amazing glimpse at what might have been for the film’s iconic ending.

Other notable scripts in the auction include:

For information and images of all lots in the auction, visit HA.com/7241.