A Look at Literary Key West 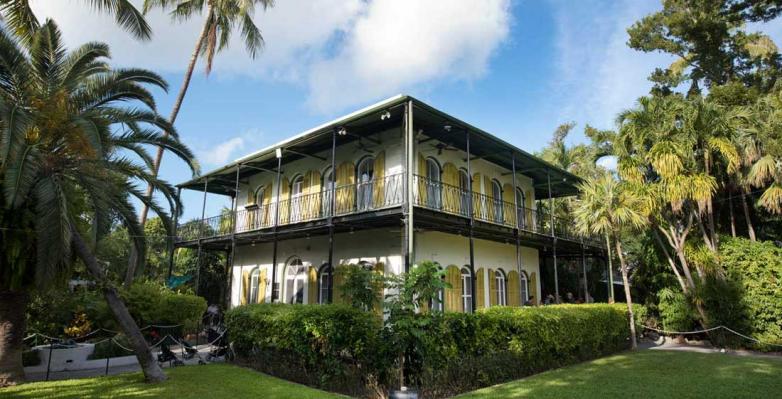 The Ernest Hemingway Home and Museum is nestled in the heart of Old Town Key West.

Every now and then it's worth revisiting people and places that have been overlooked or ignored for awhile. Take, for example, the southernmost point in the United States, Key West. Once a remote hideaway for writers and musicians, Key West is now a routine stop for cruise ship organizations and road-trippers, but that literary history is still there for those who seek it out.

On a recent trip to Key West in December, I paid a visit to the home of Ernest Hemingway. The estate remains the largest residential lot on the island--no small feat in an era of rampant construction up and down the Keys. Our tour guide led us through the interior rooms--now occupied by 59 polydactyl cats, all descendants of Hemingway's beloved feline, Snow White--where Papa and his second wife, journalist Pauline Pfeiffer, spent ten years together. Hemingway composed Green Hills of Africa, Death in the Afternoon, and To Have and To Have Not here in between fishing expeditions on his boat, the Pilar.

Across town on Truman Avenue, meanwhile, is the home of Tennessee Williams, now also a museum. Williams lived in Key West from 1941 until 1983, when he died at the age of 71. Tiny by comparison, the Williams house boasts an impressive collection of photographs, first edition plays and books, ephemera, even Williams' typewriter.

Hemingway and Williams aren't the only writers to fall under Key West's spell: Robert Frost, Wallace Stevens, Elizabeth Bishop (whose house on White Street was recently acquired by the Key West Literary Seminar), Richard Wilbur, and Judy Blume have spent time there.